Ospreay to Okada: ‘Don’t turn your back on me!’ 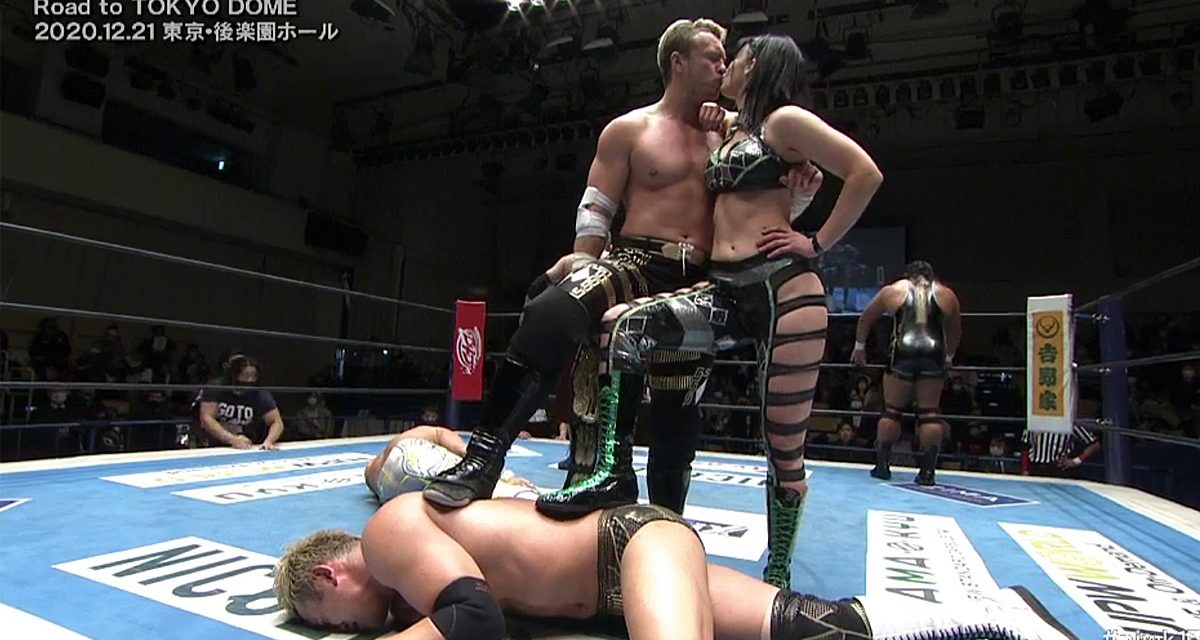 Ahead of Wrestle Kingdom 15, Kazuchika Okada still hasn’t learned his lesson. You never, ever turn your back on The Empire.

Empire notched another win as a faction when Jeff Cobb pinned Tomoaki Honma with Tour of the Islands. Cobb kicked, rolled a defeated Honma out of the ring. Determined to cripple Hiroshi Tanahashi, the Great-O-Khan gave him a knee breaker on a steel chair. Jeff Cobb and Will Ospreay held The Ace down as Khan then smashed the chair four times over his knee. Okada made the save rescuing his friend and rival.

While Okada was kneeing over Tanahashi, Ospreay ran back into the ring nailing him with a Hidden Blade.

The collision between Los Ingobernables de Japón and Bullet Club began with some odd behavior from Evil. He was very hesitant when it came to participating in the group “Too Sweet”. One wonders what that was about.

At one point Jay White became angry at referee Red Shoes who couldn’t get Naito to break a submission hold in the ropes, stop pulling White’s hair and stomping him in a corner beyond the usual count.

“What the f–k is your problem?” yelled White grabbing Red Shoes by the shirt.

Evil hit Everything is Evil on Sanada. Evil pushed Naito into White who spiked him with a Blade Runner. Darkness Falls and a Blade Runner pinned Bushi.

Evil and Togo stood over Sanada talking trash to him.

White posed with Naito’s IWGP Heavyweight Championship and the IWGP Intercontinental Championship which are on the line at Wrestle Kingdom. 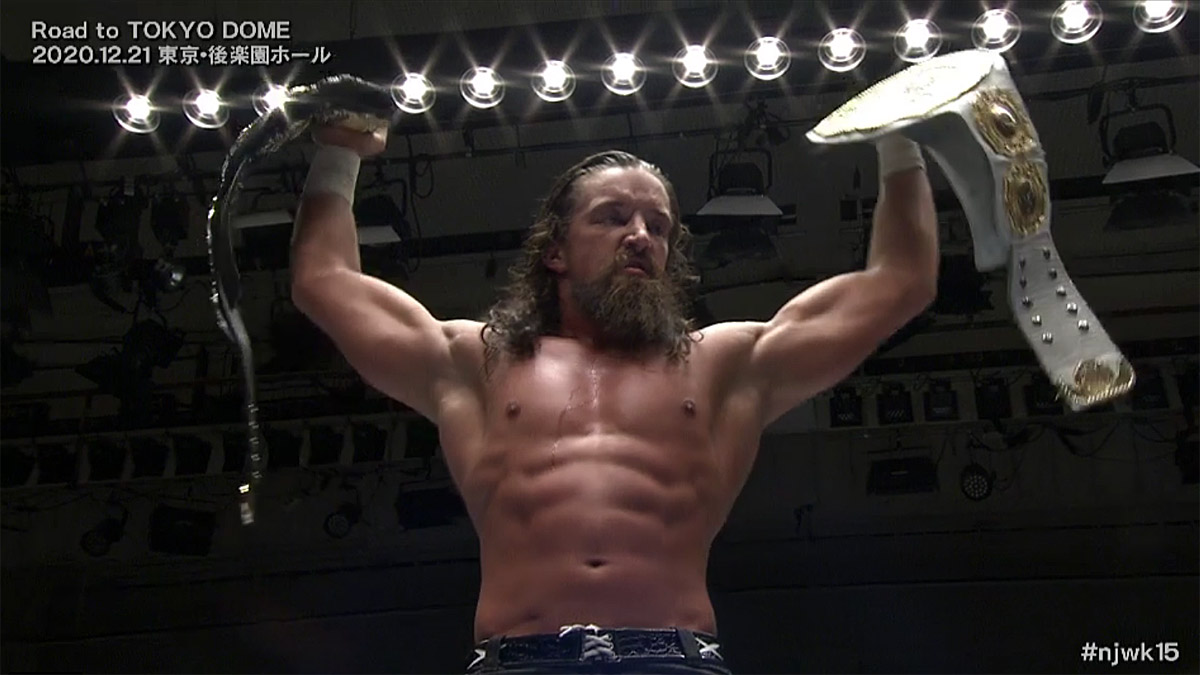 Jay White counts his chickens before they are hatched. Courtesy: NJPW.

Today and tomorrow’s events are free to stream and watch on New Japan World.

The Young Lions battle hard but they are not on the level of the veterans. Kojima pins Tsuji with his Lariat.

Toa Henare and Juice Robinson versus Yujiro Takahashi and Kenta 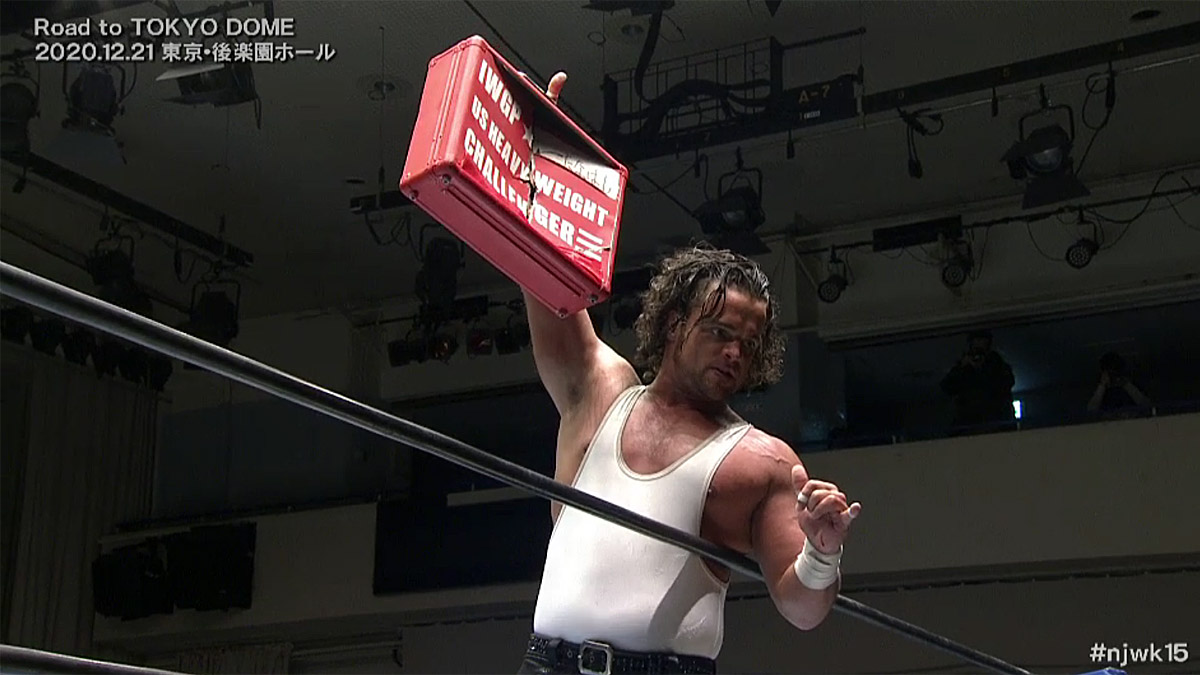 Henare is being portrayed as more of a powerhouse. Shots to the head and Kenta’s kicks to his legs do nothing. Perhaps there is a big push in the works for him? If so, it is about time. Henare has really grown leaps and bounds in NJPW. Juice gets a measure of revenge against Kenta. He pins Yujiro with the Left Hand of God and Pulp Friction. Kenta tries a sneak attack with his Wrestle Kingdom briefcase. Juice wrestles the case away from Kenta. He takes a swing but Kenta rolls out of the ring. Robinson threatens to throw the case into the crowd unless Kenta comes to get it in the ring. Kenta refuses. Robinson sits down waiting for Kenta. Kenta motions that Robinson is crazy and walks away. Robinson takes the briefcase with him to the back saying Kenta cost him the tag championship so he is costing him his United States Championship opportunity.

There is some friction between Taguchi and Suzuki. It seems as if Suzuki doesn’t appreciate Taguchi using his “Funky Weapon”. Wato pulls off a sneaky roll-up on Kanemaru. Kanemaru goes nuts on Wato stomping him into the mat. 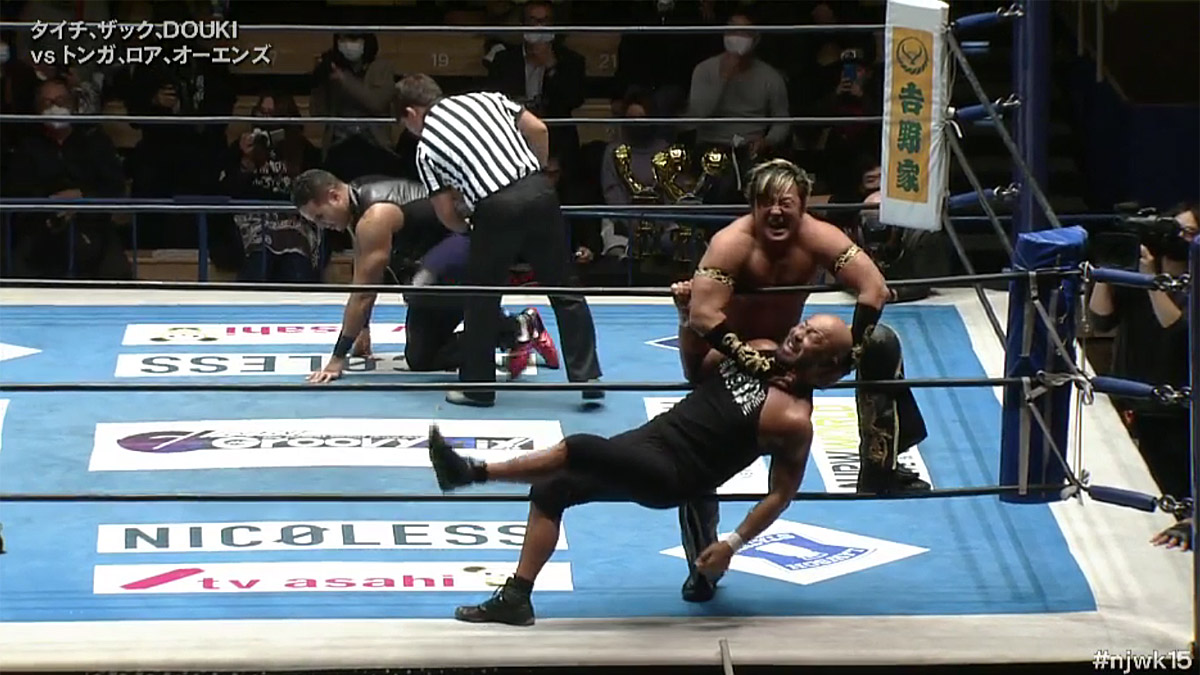 In a preview of sorts before the Guerrillas of Destiny face the Dangerous Tekkers at Wrestle Kingdom for the IWGP Tag Team Championships, Tonga gets the pin on Douki. Douki leaps over the ropes right into Tonga’s Gun Stun. Tonga thinks about putting Douki in the Scorpion Deathlock but the Dangerous Tekkers chase him out of the ring.