RAW: The WWE championship belt raised above the ring for TLC tussle 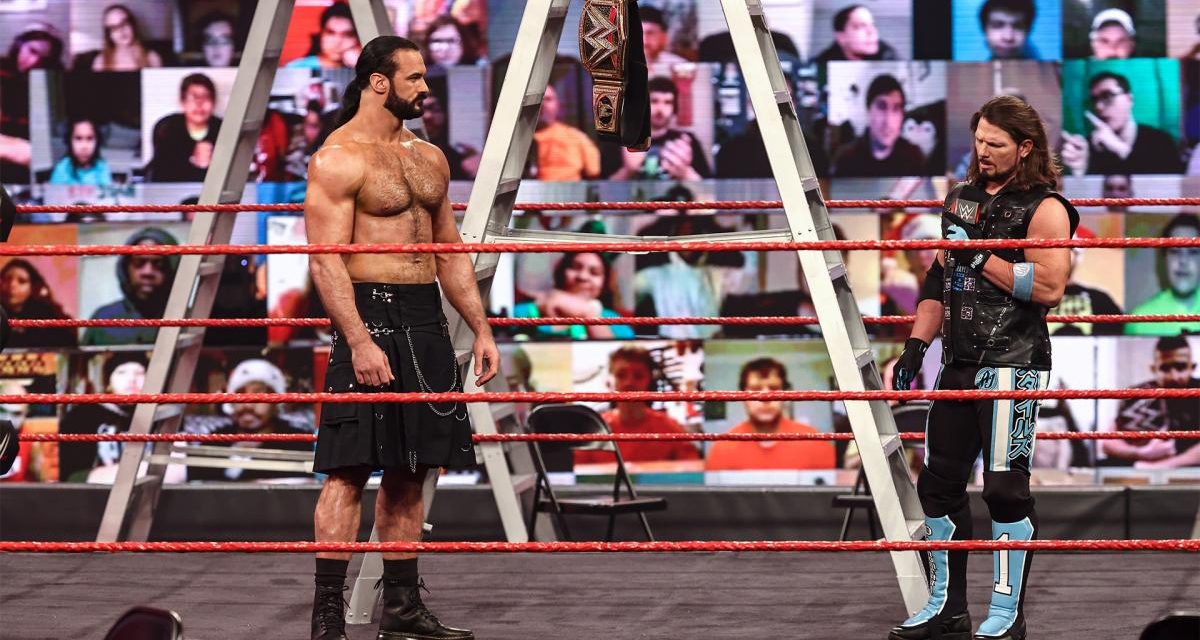 Tonight is the last Monday Night RAW before TLC, but more importantly, the ThunderDome has moved to Tropicana Field in St. Petersburg, Florida. Everything looks the same, it’s just a longer commute for the superstars. Drew McIntyre and AJ Styles will share the ring tonight, as Drew’s WWE title is raised above the ring for the ladder match on Sunday. Time head into the ThunderDome!

The Miz presents the Nightmare before TLC, a story that AJ Styles and John Morrison act out as Miz reads the story. Styles isn’t pleased as Miz ends the story with him cashing in the Money in the Bank.

Sheamus interrupts story time to confront AJ Styles, who he is facing later tonight. Styles tells him that if he isn’t part of the solution he is part of the problem. Sheamus likes being the problem.

After a commercial break, AJ has a shin lock applied. The two trade kicks, until Sheamus hits an Irish Curse back breaker. Styles is tossed across the ring with a fall away slam, but starts to favor his left leg. He hits a pump knee strike, but AJ kicks out. Sheamus hits the Ten beats of the Bowery and goes up top. He connects with a forearm shot, but Styles kicks out again. AJ is able to lock in the Calf Crusher. Sheamus is able to crawl to the bottom rope to break the hold. Styles looks for the Styles Clash, but Sheamus counters with White Noise. AJ kicks out.

Sheamus picks up AJ and carries him to the middle turnbuckle. AJ slips down and strikes Sheamus in the leg. Sheamus crashes to the mat; AJ stacks him up and gets the pin.

After the match, AJ runs his mouth. Sheamus grabs him, but Omos makes the save. In the process, Sheamus is hung up in the ropess by his ankles. AJ pummels him with chair.

Earlier today, the Hurt Business accosted a WWE crew member eating a bro-nut from Matt Riddle. Sarah Schreiber then asked MVP about his upcoming match with Riddle. MVP said he will teach Riddle about respect.

Riddle wants to run an idea by Jeff Hardy and the New Day. He wants to be in their corner tonight. Kofi is all for it.

Bobby Lashley nearly the ends the match at the bell, but Xavier Woods is able to fight off the Hurt Lock. Kofi tags in for a double team attack, only to get press slammed. Cedric Alexander tags himself in and finds himself getting flipped across the ring. Hardy and Kofi clear the ring and Woods and Riddle celebrate on the apron as we go to break.

After the break, Kofi is driven in the corner by Shelton Benjamin. Kofi with a flying clothesline and hits the Boom Drop. Cedric distracts the ref, allowing Lashley to attack Kofi and send him to the floor. Lashley with snap suplex in the ring. The Hurt Business takes turns pummeling Kofi in the corner. Benjamin with a rear naked choke. He releases the hold to take out Woods with cheap shot on the apron. Kofi with a one legged stomp and gets the hot tag to Jeff Hardy.

Hardy with an atomic drop and a leg drop to Benjamin. Alexander makes a blind tag and takes down Hardy with a knee strike. Hardy hits a side Russian leg sweep, but has the pin broken up. The match breaks down as Kofi takes out Benjamin. Lashley catches Woods coming over the ropes and slams him into the security barrier. Hardy kicks out of a backslide. Lashley makes a tag as Jeff hits Alexander with the Twist of of Fate. Hardy blocks the Hurt Lock, only to get crotched on the top rope by Cedric. Lashley applies the Hurt Lock and Hardy taps out.

Winners via submission: The Hurt Business

Back behind the curtain, Lana tells Asuka she is scared to face Nia Jax alone. Asuka reassures her that she is the bravest person she knows.

Nia slams Lana to mat out of lock up. She then smashes her into the turnbuckle. Asuka watches from the back. Lana counters a press slam with a huricanrana. Nia catches Lana on the top turnbuckle, but Lana breaks free, kicking Nia off the middle turnbuckle. She stacks Nia up and gets the pin. Asuka goes crazy in celebration backstage.

Shayna Baszler attacks Asuka backstage, as Nia dishes out punishment to Lana. Shayna joins her partner in the ring, Nia drops a leg and Baszler stomps on Lana’s elbow. Shayna takes out Lana’s boot to wrench in an ankle lock. She then directs Nia to drop a leg across the ankle. Asuka runs down, taking out Jax and Baszler.

Elias is in the ring to perform, but first introduces Jaxson Ryker. He says he had visions of Ryker when he was electrocuted a few weeks ago. Ryker claims that Elias’s music has changed him, so he is here to stop the attacks and interruptions.

He doesn’t do a good job as R Truth interrupts, to apologize for interrupting Elias on Main Event. Elias doesn’t get a chance to play as Truth is chased off by challengers for his 24/7 title. Jaxson takes out Truth’s challengers, as R Truth runs off.

The Miz and Morrison vs. Keith Lee – Two on One Handicap Match

Miz and Morrison immediately double team Lee, beating him into the corner. Lee fights his way out, taking down Morrison. Miz comes off the top rope from behind. Lee tosses him with a standing over head belly to belly. Morrison with a series of kicks. Lee answers with a pounce that sends Morrison flying out of the ring and onto Miz.

Back in the ring, Lee drives Miz into his partner. Miz with a corner clothesline and Lee staggers into a super kick. Miz hits a DDT and Morrison follows with a standing shooting star press. They can’t get the pin, though. Lee sends Miz to the floor and Morrison to the apron. He crushes Morrison with the two handed chest slap.

Miz takes out Lee at the legs, but they can’t get him over for a suplex. Lee counters with one of his own. Lee crushes Morrison in the corner, before tossing him into Miz. Morrison fights his way out of a Spirit Bomb only to be used as a battering ram. Morrison gets caught by Lee, but Miz hits a chop block. Morrison lands on top of Lee and is able to get the pin.

Winners via pinfall: John Morrison and the Miz

This is a special episode of the Funhouse as they have come to the ThunderDome. More importantly, he is wearing a “The Fiend” Christmas sweater. All the puppet friends are at ringside as Bray apologizes to Randy Orton for things getting out of hand last week. He thinks it was just a misunderstanding. Bray isn’t sure what will be left of Randy after he faces the Fiend. But first, Bray got jokes for Randy.

Orton interrupts from the Titantron, telling Bray that the Fiend out played him last week, and that won’t happen tonight or at TLC. Orton wants Bray to pay him a visit to play a game of hide and seek. Bray starts the hunt.

Ali joins the announce team, saying he wants to help Ricochet. Mace misses on a kick, but catches Ricochet’s kick. He tosses Ricochet into the corner and takes him down with a big boot. Ricochet connects with a missile drop kick and then a springboard cross body. He follows with a standing shooting star press. Ali sends the rest of Retribution to interfere with Ricochet. He fends them off, only to get choke slammed. Ricochet kicks out of the pin. One the orders of Ali, Mace finishes off Ricochet with a muddied Air Raid crash. He covers to get the win.

After the match, Ali taunts Ricochet.

Bray Wyatt is on the hunt for Randy Orton. Riddle says he has seen the future and that future is Bro-nouns. Bray isn’t swayed by the sales pitch. Ramblin’ Rabbit pops up and Riddle is star struck.

Shayna with a back breaker and then a knee strike in the corner. Shayna misses the elbow stomp and then crashes into the corner. Dana with a series of strikes and takes her down with a clothesline. Brooke climbs the turnbuckle, only to get shoved to the floor by Jax. The ref calls for the bell.

Jax and Baszler attack. Mandy Rose runs down with a kendo stick to make the save. Rose finds herself in trouble, when Asuka attacks Baszler to even the odds. The three chase Jax and Baszler from the ring.

R Truth is in the back talking to Huskus the Pig Boy. Truth thinks he is Bray’s son.

Bray Wyatt is still on the hunt for Randy Orton. He finds an empty rocking chair in a dark room. He takes a seat and Orton appears behind him. The Viper strikes, pounding Wyatt into the floor. Orton beats him into a storage chest, locking it. He douses it with gasoline and sets it on fire. Orton is proud of his work, until the Fiend emerges from the box. He locks in the Mandible Claw on Orton.

After the match, Bobby Lashley runs down, but Riddle is able to escape.

Tom Phillips in the ring to host the Ascension ceremony. AJ Styles and WWE Champion, Drew McIntyre, join him in the ring.  Omos stands at ringside as the WWE Title is hung above the ring. Styles tells Drew to address the title since it will be the last time he has it. Styles is shocked it took Drew 19 years to climb the WWE mountain and become champion. Styles thinks McIntyre will crack under the pressure. AJ knows what it takes to be a champion and he will do it.

As far as Drew sees it, this is a match he has always wanted. The fans have asked him for years when he will face him and now its in his first ever TLC match. McIntyre’s goal is to remain champion. He has led WWE through uncharted waters in 2020 and he won’t crack under pressure. He will do anything to retain the title and asks AJ if he is willing to do the same. Drew put the belt on the hook.

The belt rises and Miz and Morrison attack Drew. AJ directs traffic, telling Morrison to get a ladder. McIntyre fights off Styles and Miz and then Claymore kicks the ladder into Morrison. Drew wants AJ to get up. Omos tosses the ring steps into the ring as a distraction. Styles hits a chop block and follows with a Phenomenal Forearm. AJ hits McIntyre with a ladder and then slams the ladder over his back. He nails the champ with a chair before smashes him face first into one. McIntyre is laid on a table and Styles puts him through it with an elbow drop. AJ climbs the ladder and grabs the belt to end the show.

The “Go Home” show for TLC once again delivered on the wrestling, but it’s not going to convince anyone to order the show if they haven’t all ready. The Firefly Funhouse field trip was a let down, until Orton lit a fire under it. RETRIBUTION did pick up a win, though, as Ali is still trying to recruit Ricochet. The main event segment didn’t do much other than showing the champ getting beat down.