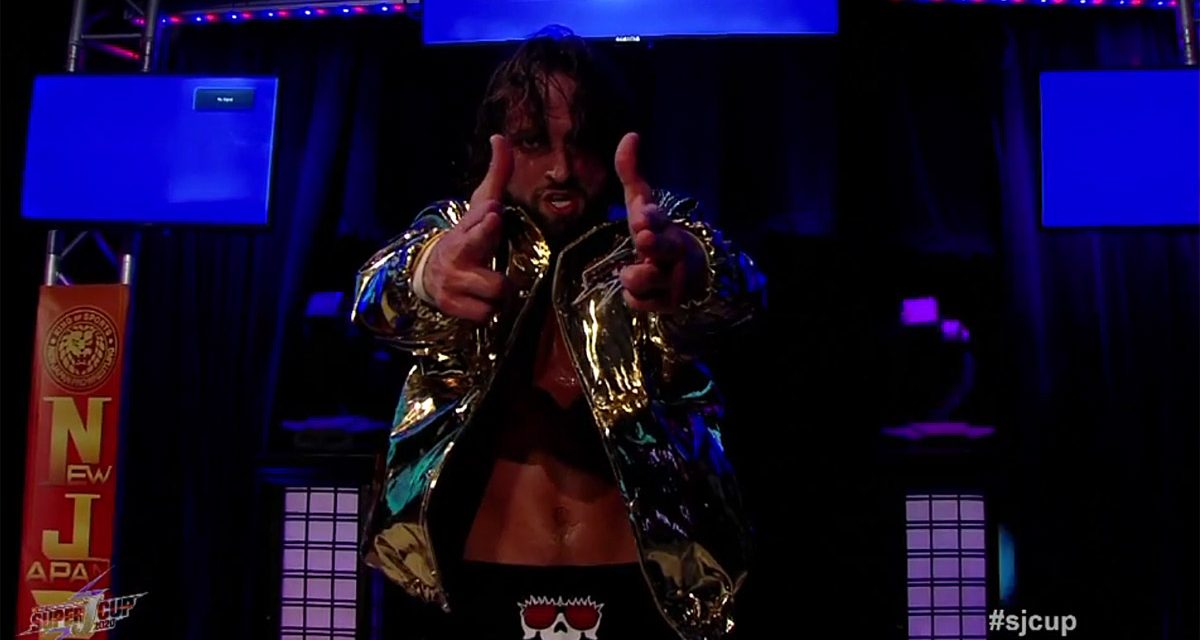 Canada’s own El Phantasmo is the Super J-Cup Champion for the second year in a row equaling the back-to-back Super J-Cup wins by Jushin Thunder Liger and Naomichi Marufuji.

The one night tournament took place in the United States on the set of NJPW Strong and featured eight participants including Lio Rush and Impact Wrestling’s Chris Bey and TJP. Despite the poorly lit area outside the ring and a fair to middling Alex Koslov on commentary, the tournament provided two and a half hours of brilliant technical wrestling.

ELP defeated Lio Rush to make the semi-finals and beat an injured Blake Christian to reach the finals. ACH had a tougher road to the finals having to beat TJP and Chris Bey.

In their final match-up, El Phantasmo jump-started things by clobbering ACH from behind as he made his entrance. He took the Super J-Cup trophy and broke it over ACH’s back. The officials checked on ACH as ELP grinned from inside the ring.

“Are you kidding? He cannot compete!” said an incredulous ELP when the official ruled that ACH could continue. 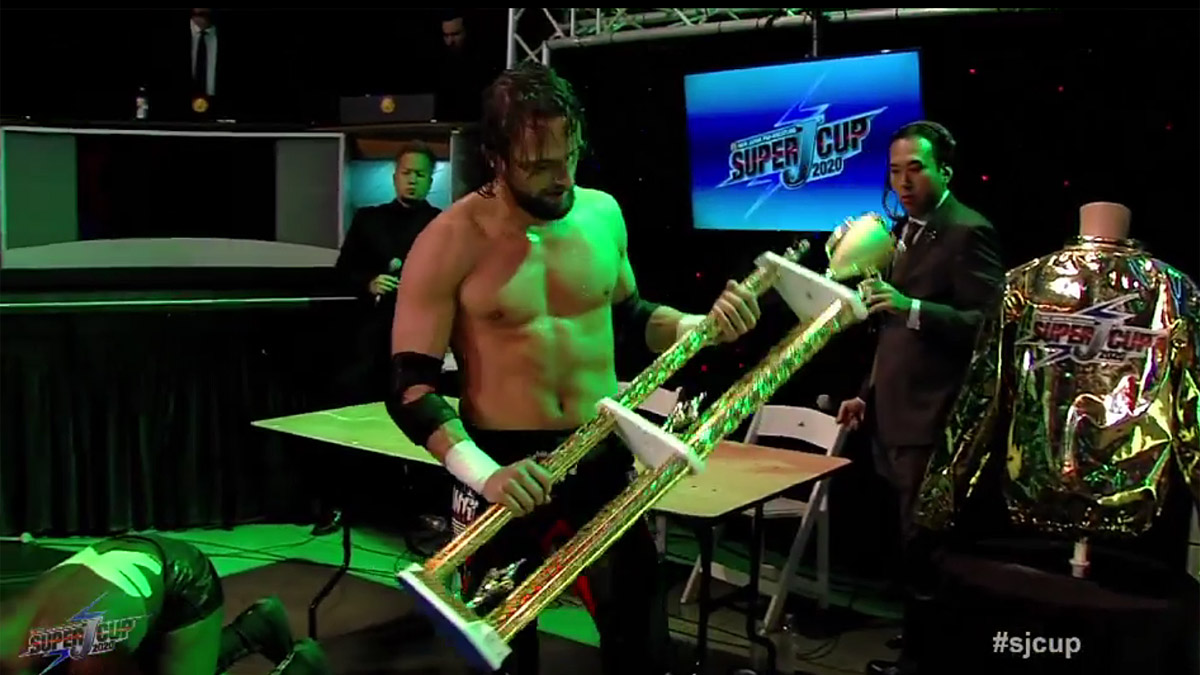 ELP knows exactly what to do with the Super J-Cup trophy. Courtesy: NJPW.

ELP used the athletic tape on ACH’s injured back to choke him out. He suplexed him on the stage causing even more damage to ACH’s already injured back. A determined ACH kicked out of a Styles Clash and escaped ELP’s attempt at Kenny Omega’s One-Winged Angle as ELP rolled out the Bullet Club Greatest Hits compilation.

After being crotched on the top rope ACH still delivered a Super Gut Buster but ELP kicked out at two.

ELP put up his knees to block ACH’s Midnight Star splash from the top rope. ACH was shoved into the official and punched in the “lower abdomen”. He still kicked out of ELP’s pin though. It took a super kick and a Canadian Revolution 2 for ELP to secure the Super J-Cup victory.

ELP smashed the rest of the trophy when it was presented to him, spit on the ceremonial gold jacket and threw it onto the floor.

“The junior division is mine! There is just one little problem and that is YOU Best of the Super Juniors. I watched last night and I know you are watching right now. Right now I am calling it. It is me, the back-to-back Super J-Cup Champion versus you Mister Super Junior and you know what? I will see you at Wrestle Kingdom!” said ELP accepting Hiromu Takahashi’s challenge.

An awful showing for Connors who goes out in the first round like he did last year.

ACH and TJP battle on the top rope. ACH, who looks to be in the best condition of his career, hits a Super Gutbuster and a Midnight Star splash for the victory. TJP and ACH hug after the match is over.

Winner: ACH at 9 minutes and 52 seconds

A great high-flying match. Blake Christian is injured, bleeding from the nose. His Spanish Fly off the second rope gets a two count. Christian pins Horus with a Frog Splash.

Winner: Blake Christian at 12 minutes even.

El Phantasmo’s music is muted due to licensing issues. Those issues are Phantasmo’s refusal to let it be heard until NJPW pays him more money. Phantasmo rubs away non-existent tears. He is also quick to remind Rush that he is the defending J-Cup Champion. Kevin Kelly gives us an update on Blake Christian. He has broken his nose. “You think you are tough you little midget?” laughs El Phantasmo as he muscles Rush to the mat and snaps his fingers. El Phantasmo gives Rush a Styles Clash on the arena floor. He whips Rush sternum-first into a corner. Rush has the air knocked out of him. A Poison-Rana sends Phantasmo flying out of the ring. Rush moonsaults ELP on the floor. ELP kicks Rush into the official, pokes him in the eye, punches him in the “lower abdomen” and rolls him up with a handful of tights.

Here’s hoping we see more of Rosser in NJPW. He looked fantastic tonight. Limelight though gets the pin after Kratos hits a nasty German Suplex.

Winners: Danny Limelight and JR Kratos at 12 minutes and 49 seconds.

A battle in which both wrestlers left everything in the ring, ACH moves into the finals with a brainbuster and a Midnight Star splash.

Winner: ACH at 8 minutes and 27 seconds.

ELP targets Christian’s injured nose and face throughout the match. ELP rolls out of the way so that Christian splashes nothing but canvass. A super kick sends ELP into the finals.

Winner: ELP at 7 minutes and 24 seconds.

Ken Knight and Ren Narita versus Kenta and Hikuleo