Behind the Gimmick Table: John Arezzi talks merch Then and Now 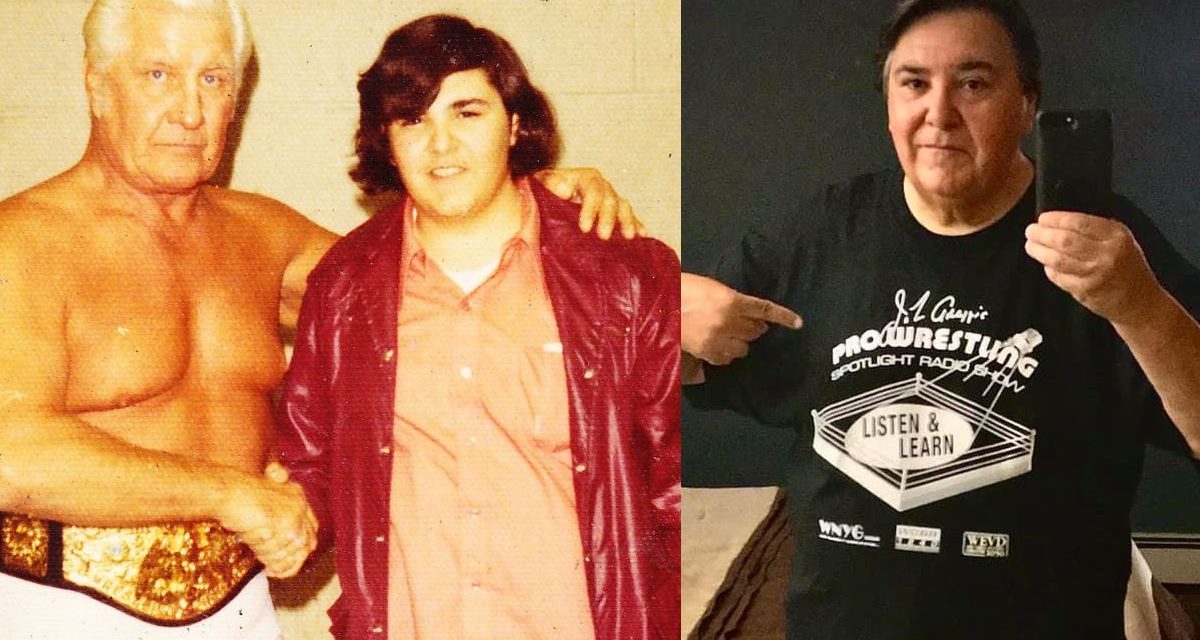 John Arezzi has been at the forefront of as the standard bearer of wrestling fandom trends.

Now as the interest in and popularity of pro wrestling collectibles has hit all-time highs, Arezzi has returned to innovate once again. 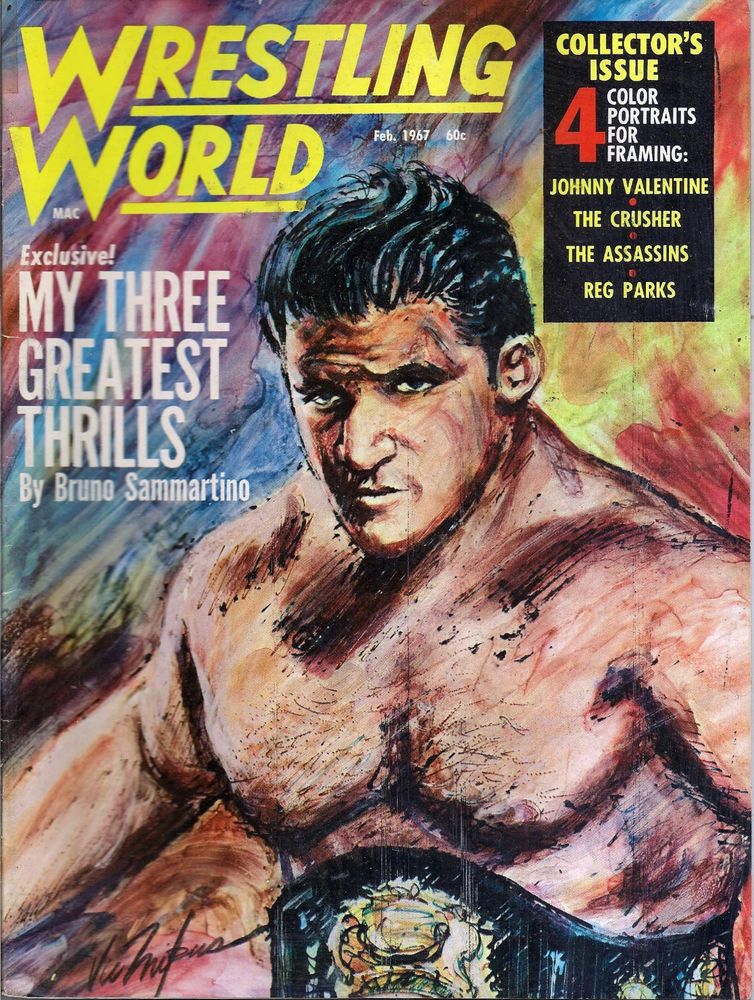 Arezzi has been consuming professional wrestling media since 1964. He started with TV. It was not until three years later in 1967 at ten years of age that he would discover the magazines. He recounted the first time he ever saw them was in a local pharmacy/candy store. It was Wrestling World magazine, dated February 1967, with “Bruno Sammartino who was a hero of mine painted on the cover. I went crazy… the store was called Doc’s in West Babylon, New York. Quite frankly I would buy every single one I could find and afford.” His favourite magazines were Wrestling Revue and Wrestling World. Others like The Wrestler he describes as “more salacious,” and that he rather “liked the ones that focused on the guys I watched on TV.” This would lead to him also stocking up on back issues wherever he could find them.

It was not until years later in 1974 at the age of 14 that Arezzi would get into collecting photographs. The reason he hadn’t earlier he explained for SLAM! was because of the laws around pro wrestling in New York City. “You couldn’t go to wrestling until [the age of] 14 years. Guys would sell photographs outside venues, photos of the guys in the territory at the time.”

The photography bug would bite Arezzi immediately and it would not take long for him to become a photographer at the events himself, first in the arena and soon enough at ringside. Not long after that he would also be tackling the cousins of magazines: programs, as a collector and consuming and creating content himself for fan clubs and newsletters. 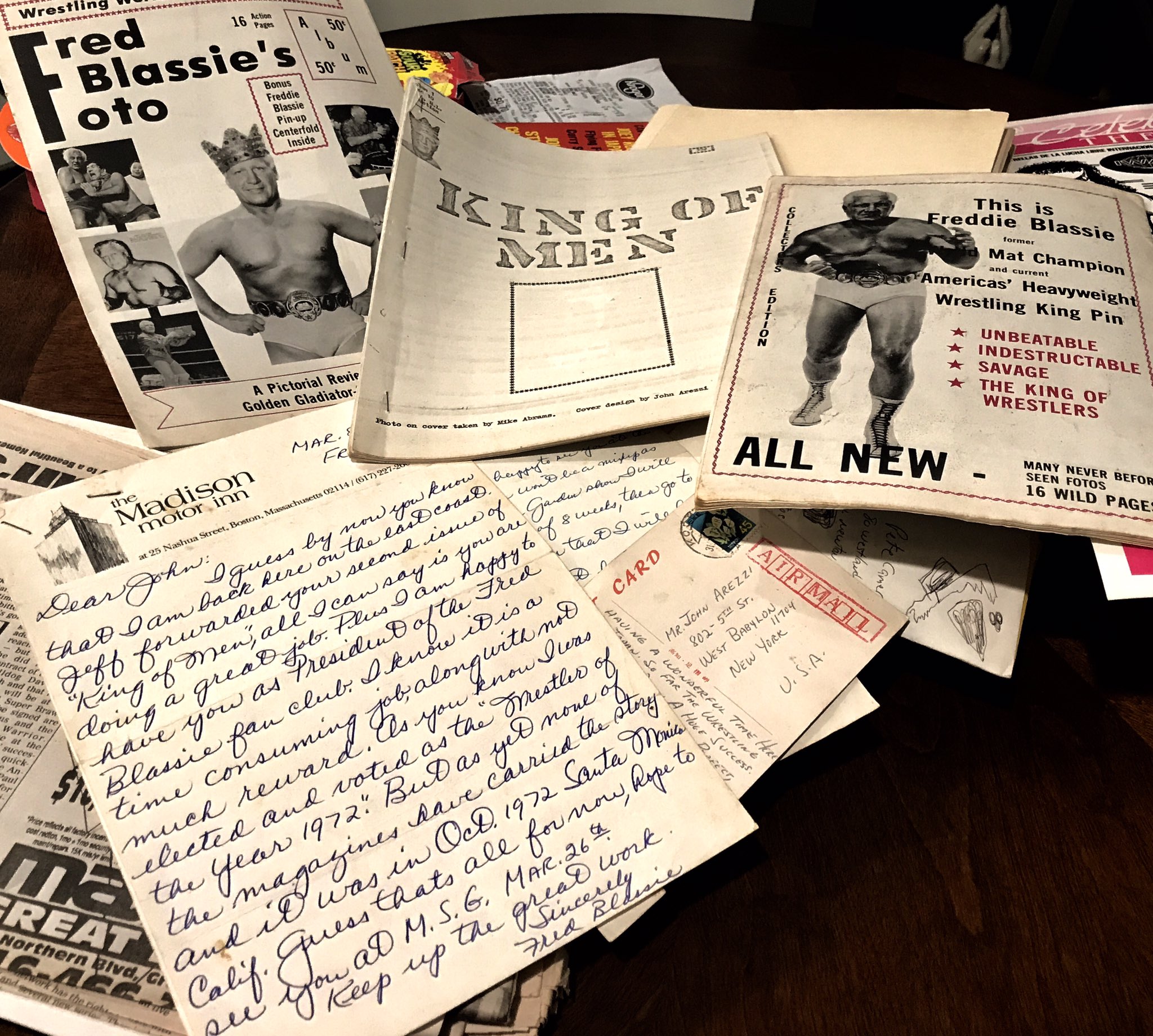 Today, fan clubs and newsletters have of course been replaced by such things as social media pages and websites of all ilks that cater directly to fans of any wrestler or hundreds of different types of merch that now exist. In the 1970s there were no action figures, replica belts, even books were an oddity. The idea of online exclusives and LootCrates were a long way in the future.

But Arezzi did put the thought in to make his fan club content exclusive in its own right. Utilizing his position as a photographer, he would include exclusive detachable photographs attached to the cover of his Fred Blassie newsletter for the Fred Blassie Fan Club that he ran, The King of Men. 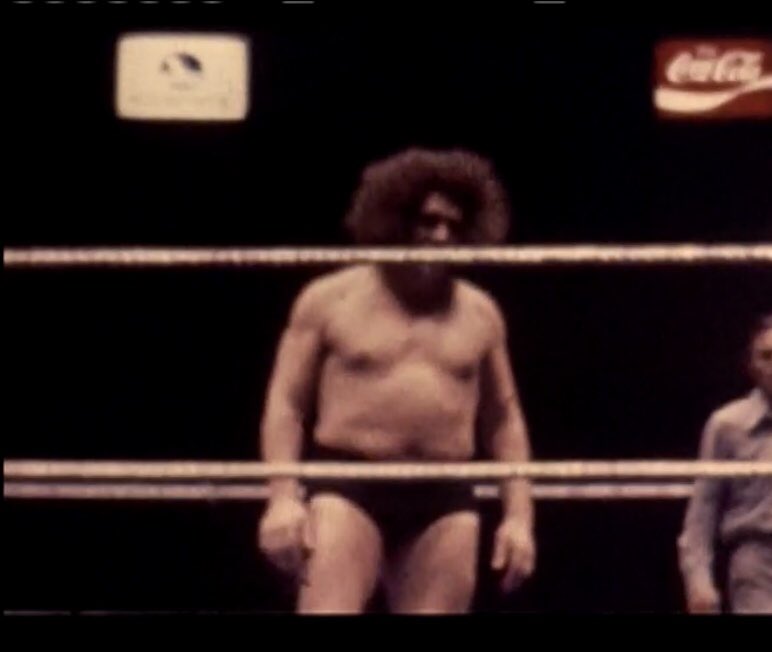 His innovations and precedent setting would not end there. He started shooting matches on 8mm film, beginning in January 1973. After taking photos he “pestered Mom and Dad for an 8mm camera. There was nothing on TV from the big matches from the Garden. That led to me having the only known footage of Andre the Giant debut at the garden in 1973. I filmed that entire year.” 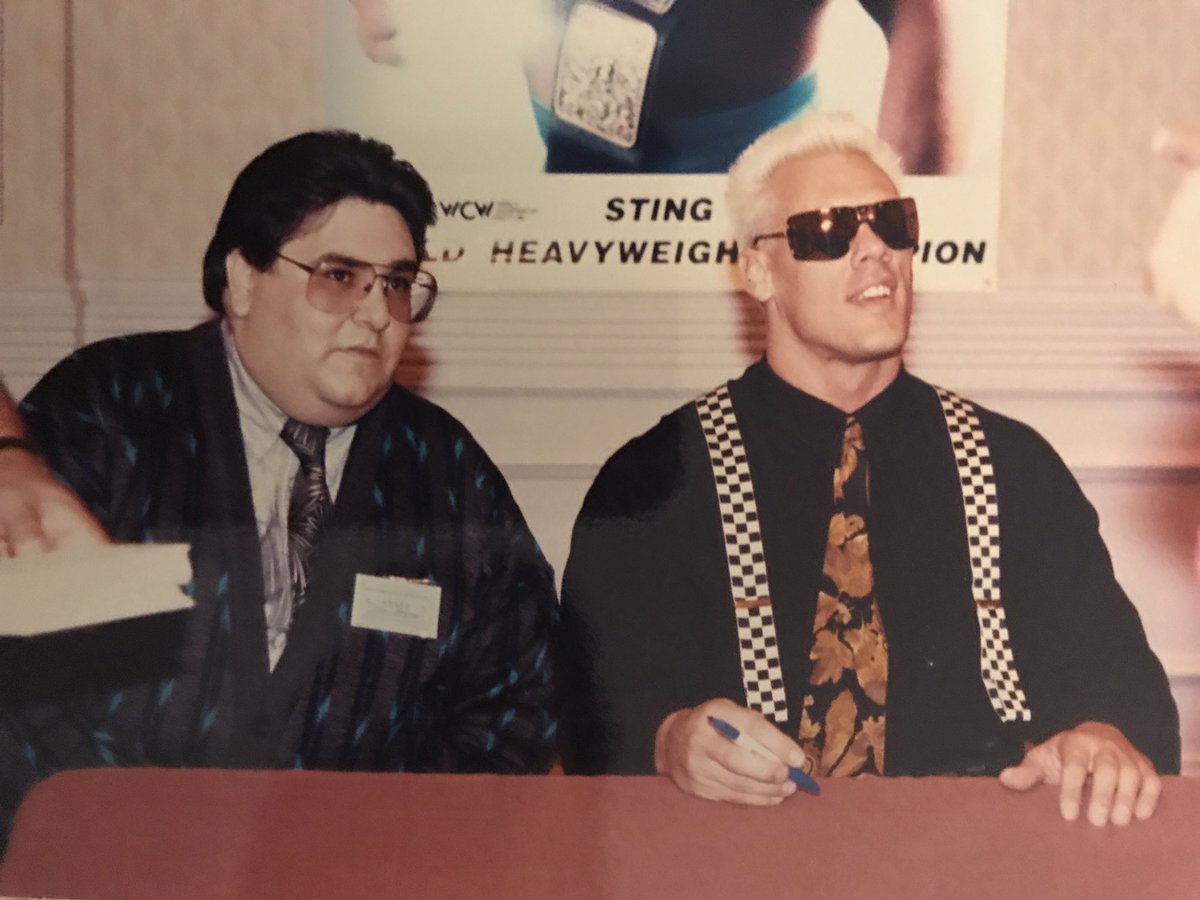 By the time Arezzi would have his radio show Pro Wrestling Spotlight in 1989, the medium of wrestling video was in full swing. This would lead to yet another innovation of his. As he connected with pro wrestling fans through radio, he wondered “why there was no wrestling conventions that brought fans and wrestlers together. There were baseball shows… I thought, ‘Let’s get the fans and the wrestlers together.’ I discovered there are a lot of collectors that had a desire to sell their stuff at an event like this. I had dealers reaching out from all over the country for [the event in] August 1990.”

Today wrestling figures of all ilks are a bestseller at such events. But at this initial offering Arezzi explains that “action figures were still new. LJNs were prominent. When Hasbros came out they were really popular, but the majority of vendor tables would sell old magazines and photographs. Some dealers had the idea of having wrestlers at their dealer table.” Other items that permeated his convention included “T shirts. A lot of VHS tape trading. bootleg VHS tapes. A guy that specialized in all the matches from Puerto Rico. More bloody and gory and gimmick matches like chain matches. Some specialized in Japanese magazines. You couldn’t read ’em but they were high quality and glossy.”

These days Arezzi is acting as a dealer of his own, selling off some of his large collection of autographs, photos and artifacts on a few platforms. He’s experimented with eBay compared to Facebook’s Marketplace, and is able to cross-promote on his socials, and his popular John Arezzi’s Pro Wrestling Spotlight Then & Now podcast, his Facebook John Arezzi’s Mat Memories Group — where he runs his Pro Wrestling Spotlight Live Facebook show weekly, usually on Saturday nights. And, coming in the spring of 2021 is his memoir, Mat Memories: My Wild Life in Pro Wrestling, Country Music, and with the Mets, written by SlamWrestling.net Producer Greg Oliver, and published by ECW Press. 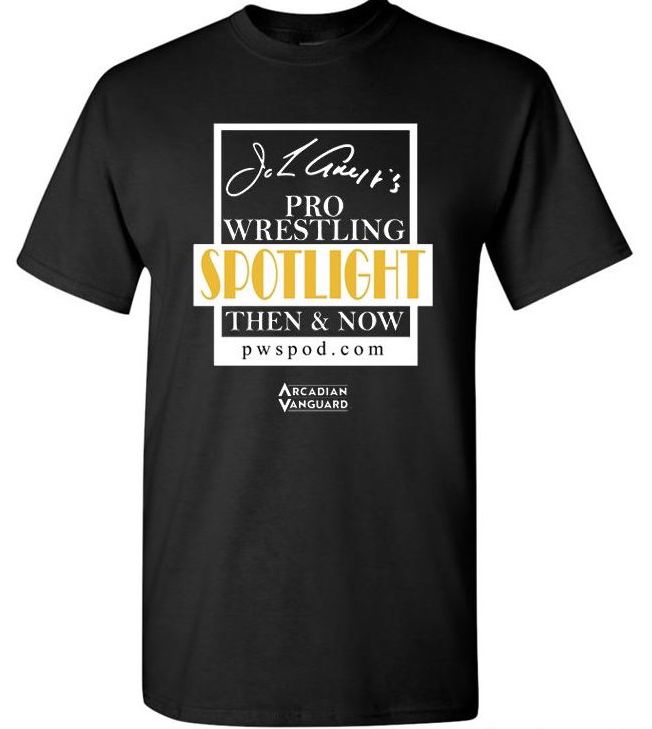 Buoyed by the popularity of his podcast and the Facebook show, Arezzi has dived back into his own line of merchandise, teaming up with Forward Merch, which works with Broadway theater companies, and musicians from Andre Bocelli to Weird Al Yankovic. As with so many of the changes over the last 30 years, producing T-shirts now is a breeze compared to 1991.

“Kristian Theodore was my key contact at Forward,” said Arezzi. “He and his team helped me design the T-shirts and run fulfillment. It’s a dream relationship.” Women’s tees have just been added, and, down the road, there will be shirts for the four wrestling conventions Arezzi ran, and baseball caps.

Not every T-shirt is accessible though. Two of them are decidedly an in-joke, a reward for loyal listeners to his podcast back in the day, and those who are rediscovering the shows again through the podcast with Arezzi and co-host Brian Last.

Just who is George from Lindenhurst, and why does he get not just one, but two T-shirts?

“He was this kid who called into my show. Looking back, I wasn’t very nice to him, often brushing off his questions,” laughed Arezzi. “But he kept calling back, and one of his lines on the show caught on, ‘Holy cow! That’s good!’” 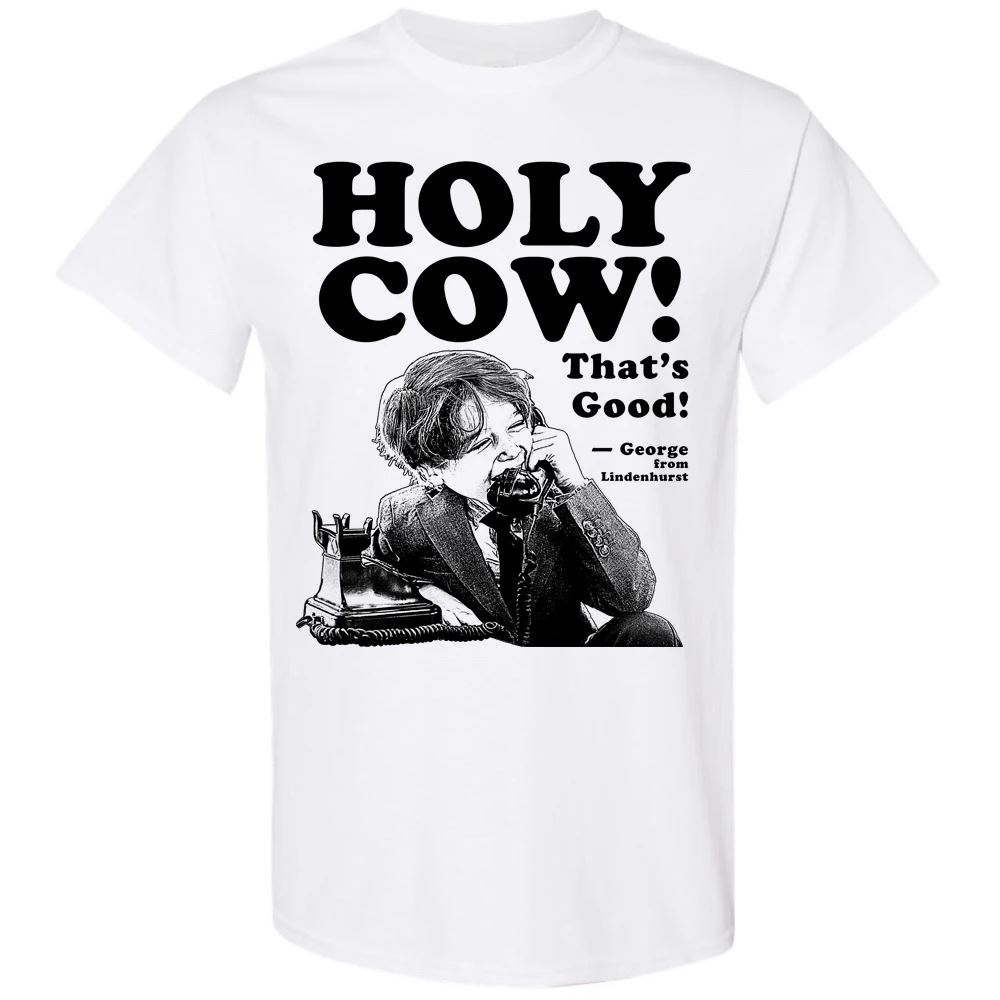