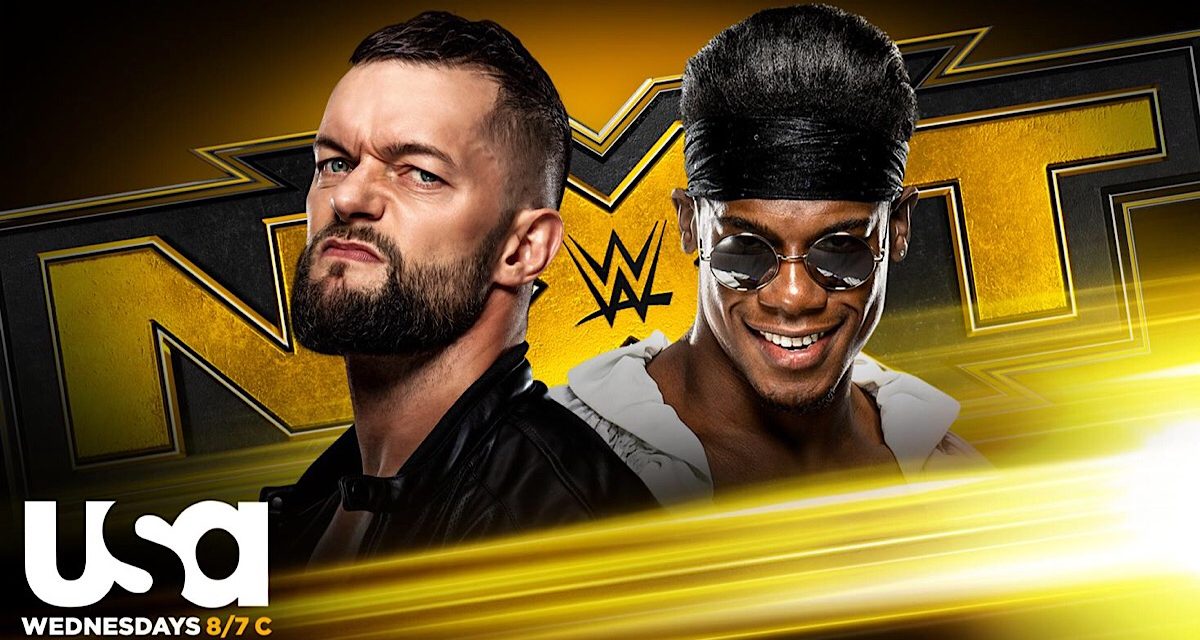 Smartly, no NXT Champion competed on this show; it made room for spotlight. Velveteen Dream is better than ever, The Robert Stone Brand has found its groove, and Pat McAfee is one heck of a promo. NXT stood alone tonight amidst wrestling’s Wednesday War, and they made the most of it.

Holland hulks over Gargano and shoulder tackles him to the outside. Gargano continually targets the right arm, but Holland keeps the pressure, whipping his opponent into the corner preceding a well-executed, corner-flip bump. Gargano finally gets some significant offense with a suicide dive before break.

During picture-in-picture, the spot that reportedly halted the match is shown; Gargano attempts to counter Holland’s attack by flipping with the momentum but instead lands badly on his head. The referee attends to Gargano who was just evidently playing possum, superkicking Holland for a two-count.

The match continues, and Holland delivers a powerslam. They trade blows until the former pounces Gargano to the floor. Holland slams his opponent onto the apron, but Lerae stops him from entering the ring, allowing Gargano to kick the ropes into his groin. Gargano hits the One Final Beat to win the match and enter Saturday’s ladder match.

Gargano is a trooper, because that landing was nasty.

Kai immediately tackles Kameaa and beats her down. She hits the Kaoi Kick for a two-count. Kameaa avoids a submission, rolls Kai up, and makes her comeback. Kai sends her opponent into the ropes and delivers the GTK for the win. 50/50 doesn’t just negatively affect WWE storylines, it affects its matches too.

Kai takes the mic before Io Shirai storms the ring. They brawl towards the stage, and Raquel Gonzalez makes the save, returning as Kai’s sidekick once again. Kai can’t “do it on her own.” 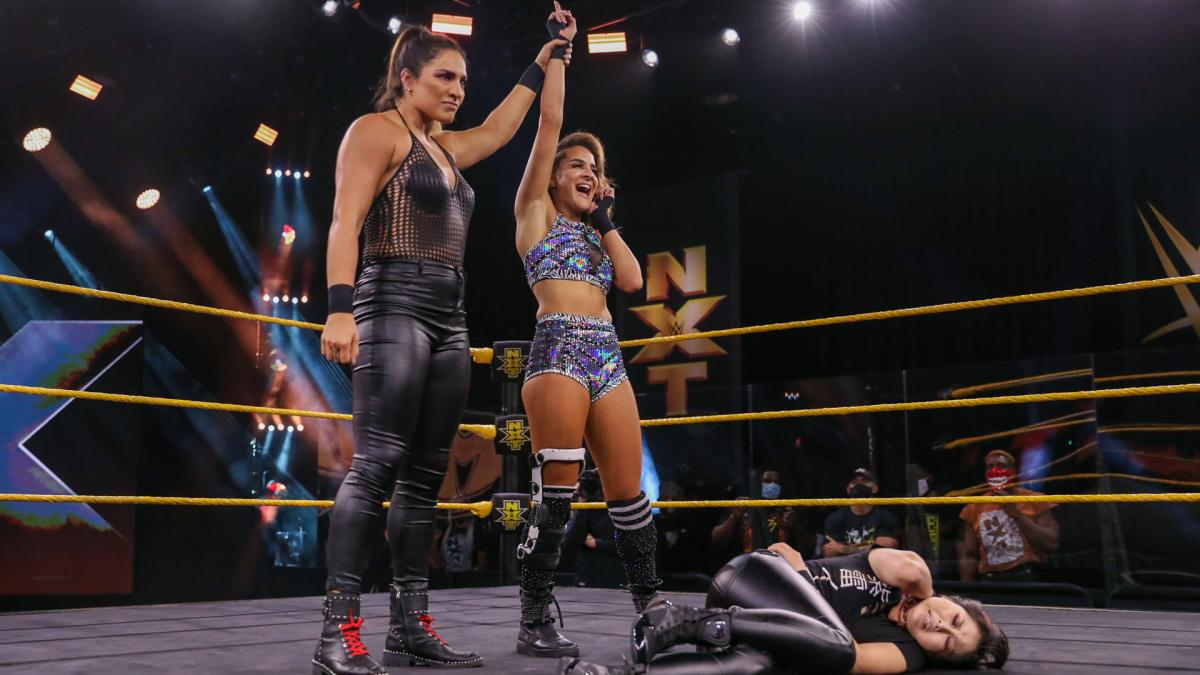 Tegan Nox is interviewed backstage and talks about her broken friendship with Candice Lerae. She says that she’ll attempt to mend their relationship over a glass of wine.

All six men brawl, and Scott, Escobar, Breeze, and Wilde fight to the floor. Mendoza and Fandango battle inside until the action breaks out again. On the outside, Breezango delivers Double Superkicks to Mendoza and Wilde before commercial.

Fandango reinjures his targeted left arm, and Legado Del Fantasma hits a triple-team maneuver. Fandango finally makes the hot-tag towards Scott and he single-handedly takes out the opposing faction. Scott attempts a flying nothing before Escobar delivers a flying knee. Wilde then intentionally runs Scott into his partner Breeze, which simultaneously creates a tag. “Swerve” hits the JML Driver, but he isn’t the legal man. He gets taken out before Breeze makes another comeback. Escobar returns with the Phantom Driver for the victory.

The Undisputed ERA enters the ring, surrounded by unanimous jeers from Full Sail. McAfee and his football lackeys enter from the back door to a mixed reaction. McAfee says, “I brought 28 years of NFL experience with me, because I know you better than you know yourself.” For a former NFL punter, McAfee cuts an awesome pro-wrestling promo. Cole sends The ERA ringside, and McAfee follows suit with his ‘ballers.

McAfee recalls punting Cole unconscious, mocks his independent upbringing, and mocks his NXT paycheck. He says, “(You) and the ignorant wrestling community at home better hope that I don’t stick with this profession, because this will be number eight (million) if I want it to.” He continues, proving himself an incredible heel promo! 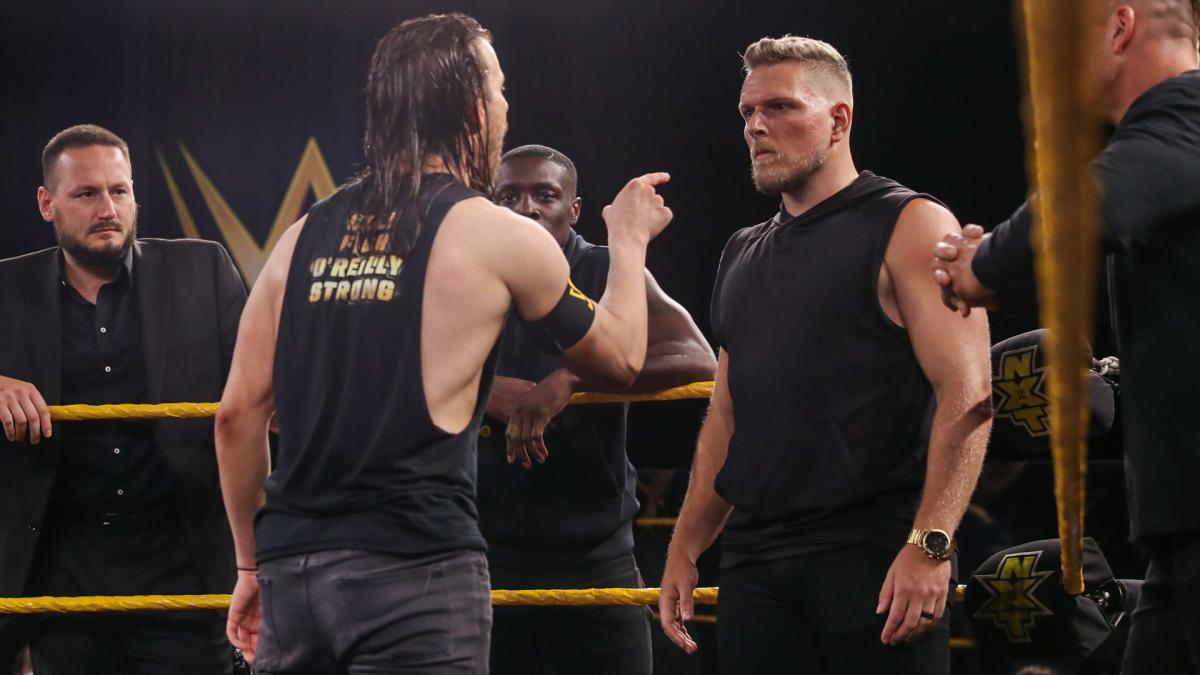 Security tries to hold Cole back, but he fights them off; the Full Sail audience is completely on his side now. Cole approaches McAfee and says, “At Takeover, I’m gonna make you my b****”

Ripley and Martinez fistfight into Aliyah, and Blackheart continues the attack on the latter. Martinez distracts Blackheart giving Aliyah the advantage before break. After record-setting years in developmental, Aliyah has finally found her groove.

The Brand works together on Blackheart until Ripley makes the comeback on Aliyah. Blackheart takes out Martinez with an Enzuguri as Ripley hits a modified Riptide on Aliyah. The rivals Ripley and Martinez brawl, and the former delivers a powerbomb over the outside barricade. Blackheart hits a top-rope senton on the downed Aliyah for the victory.

An epic video package highlights and hypes the NXT Championship Match between Keith Lee and Karrion Kross set for this Saturday. The production on this is amazing! It’s very reminiscent of Ruthless Aggression Era, pre-match video packages. This thing is exhilarating, really.

Dream’s whole schtick was provocative before, but now it’s on a different level. Before locking up, he mocks Balor’s finger guns — regardless of his current situation, Dream’s character performance is better than ever. After some smooth back-and-forth chain wrestling, Dream retreats to the outside. 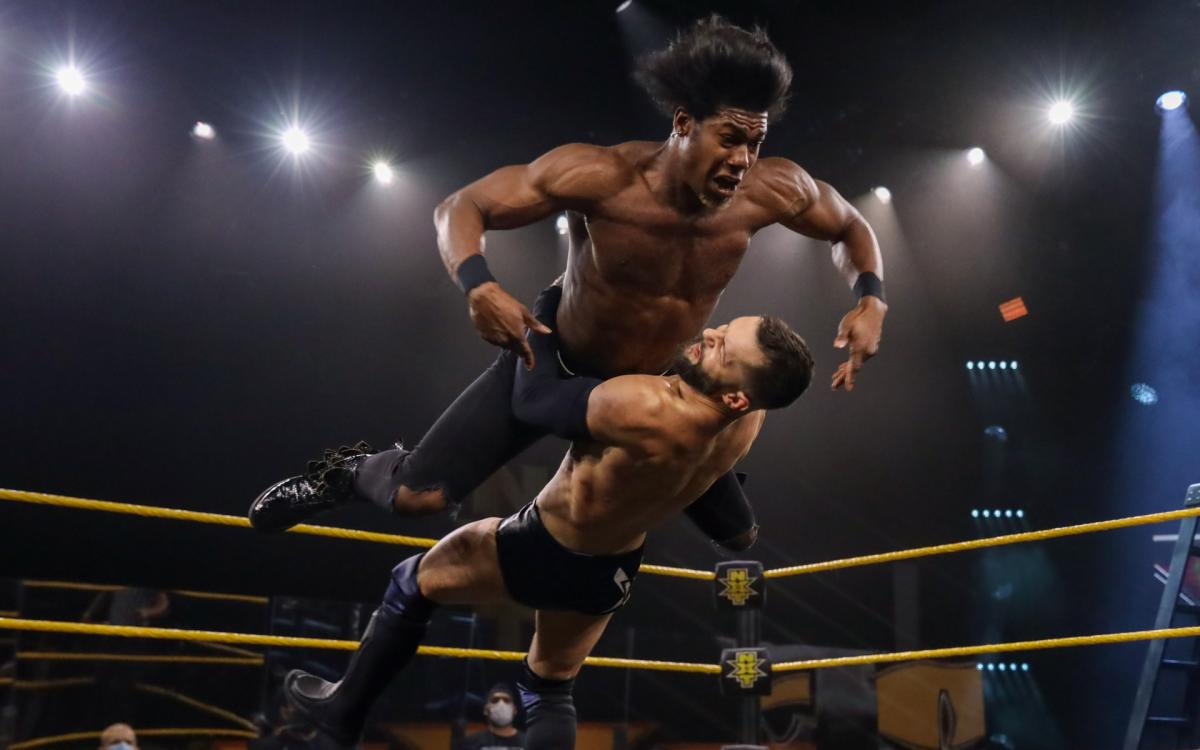 Back from break, Dream catches Balor with a Thesz Press before howling into the camera mocking the Wolf Pack. He can’t stop “two-sweeting” even as he strikes down Balor. The latter applies a leg-lock, but Dream reaches the ropes. Balor continues the attack on Dream’s left leg. The Dream regains control, gyrating on his opponents face in the corner while delivering punches. “Where’s my count?” he asks the Full Sail audience. He hits a top-rope Axehandle before ladder-match competitor Cameron Grimes shows up ringside preceding commercial.

Grimes sits atop the ringside display ladder holding the North American Championship. Balor sets up Dream into the Tree-of-Woe and whips him outside. Balor then climbs the ladder after Grimes, but Dream grabs him, throwing his opponent back inside. Balor hits the corner dropkick, gets distracted by Grimes, allowing Dream to hit the Superplex. 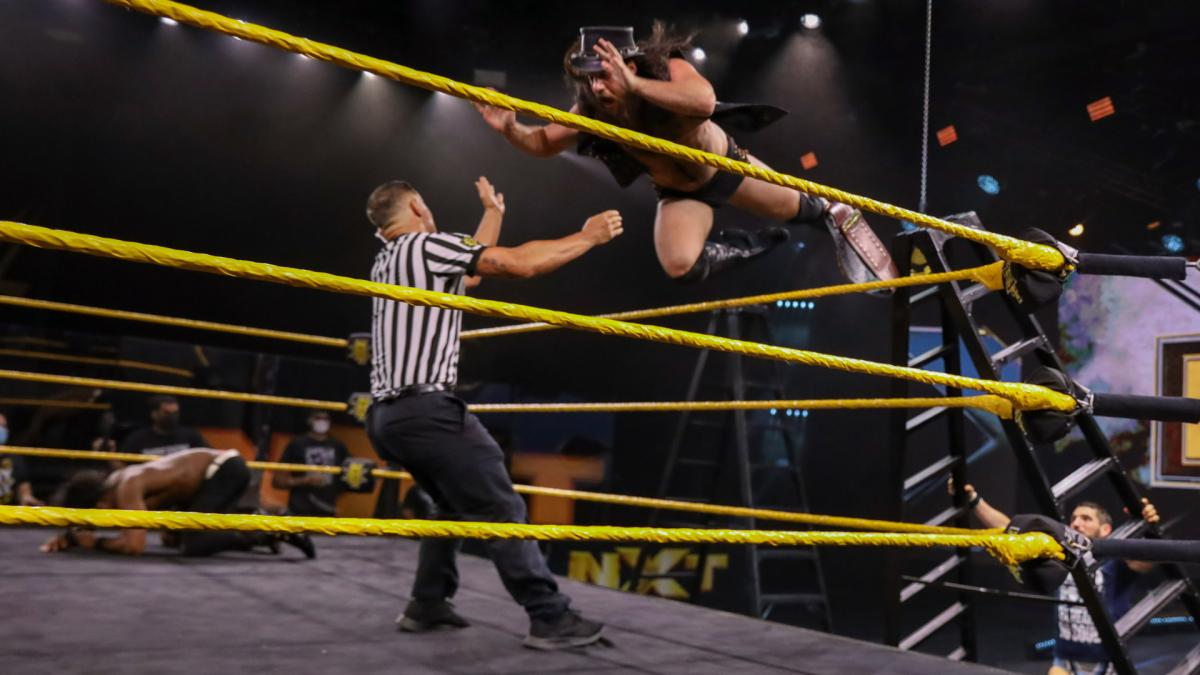 Cameron Grimes gets knocked off a ladder. Courtesy: WWE.

Fellow ladder-match competitor Johnny Gargano appears and tips the ladder over, knocking Grimes into the ring and into the ref. Both Balor and Dream take out Grimes before the former delivers a Slingblade to Dream, who follows with a Superkick. Ladder-match competitors Bronson Reed and Damian Priest surround Gargano in the ring as Priest strikes the former. He runs to the ropes before Dream hits him with another Superkick, followed by a closeline by Reed to the floor. Balor dives over the top onto the two big men. Insert a “This is awesome!” chant here.

But rival Timothy Thatcher takes out Balor. Dream hits the Dream Valley Driver and says, “Ref, you don’t wanna miss this!” as he delivers the Purple Rainmaker elbow drop for the victory. The North American Championship lineup is set: Johnny Gargano vs Cameron Grimes vs Bronson Reed vs Damian Priest vs Velveteen Dream. Gargano superkicks Dream, Grimes superkicks Gargano, Priest chokeslams Grimes, Reed pounces Priest and slams down Dream before holding up the belt to close the show. 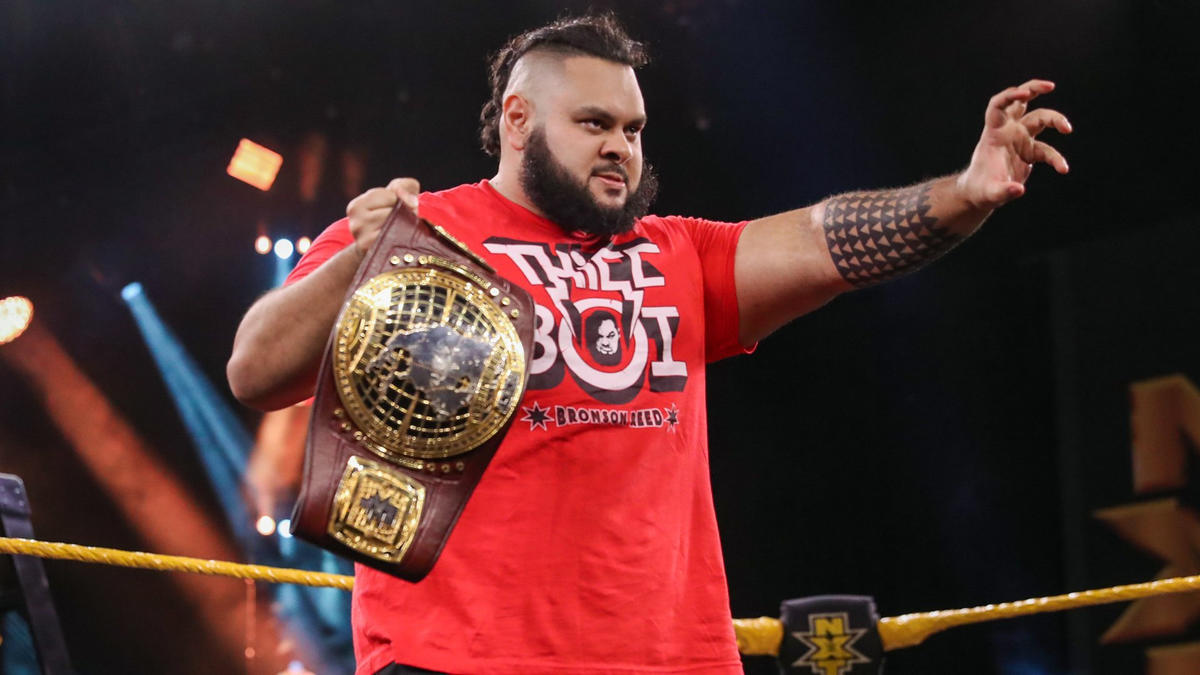 My excitement level for NXT Takeover shot through the roof after this show. You can’t deny how NXT has made multiple unique stars throughout their deep, deep roster. The wrestling, the drama, the chaos was on point tonight.