Mat Matters: Remembering the man behind the Kamala makeup 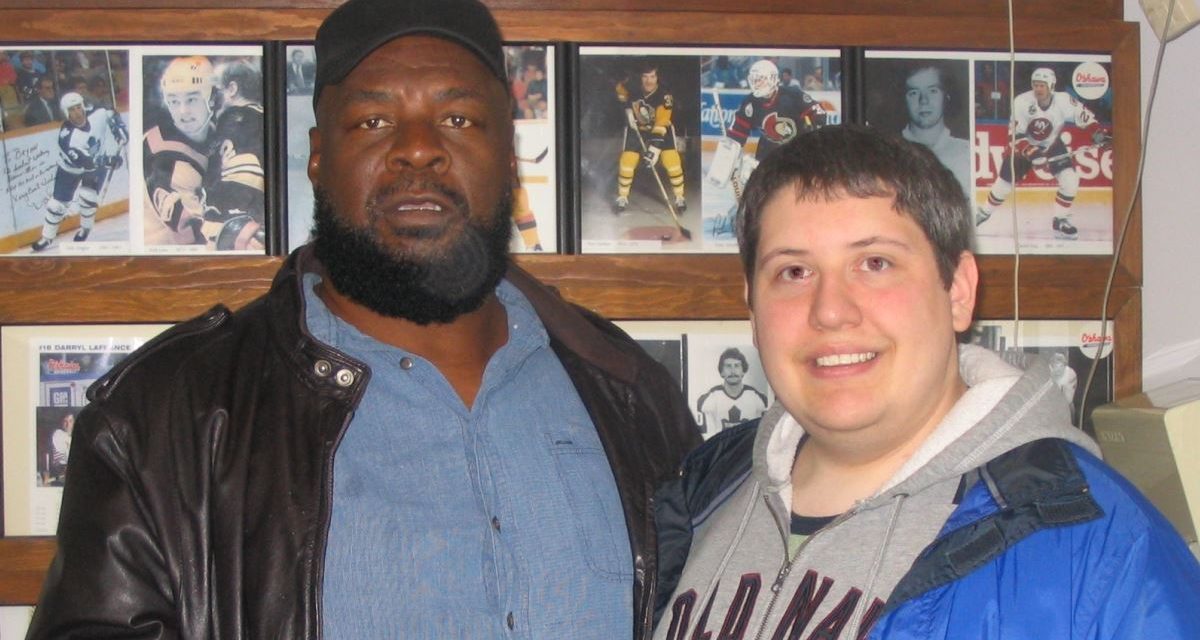 Being at an age where you start losing your childhood heroes can be terrible, but it is even worse when you had developed a good friendship with one of them. On Monday evening, August 9, I got the terrible news the James Harris, otherwise known as Kamala The Ugandan Giant, had passed away — and much like countless wrestling fans, I’m devastated.

It has been a long time since I have produced a piece for SLAM! Wrestling, but nearly 20 years ago, I managed to put together a story which has been said still holds up to this day. “Breaking Kayfabe with Kamala” was the product of a fan wanting to connect with one of their idols, extensive research, and the passion to tell a story that hadn’t been told at the time.

What I never expected in all of this, however, was to develop a friendship with James. We had not spoken in years, but I thought of him often, especially as he experienced health troubles.

As a child, I remember initially being scared and then intrigued by Kamala while casually watching wrestling at my late Grandfather’s house. Grandpa was an old-school wrestling fan and his blood always seemed to boil whenever the heels would cheat. His anger toward in-ring chicanery was evident long before I learned a big secret. In our last conversation before his passing in 2004, he revealed to me that years earlier he had once jumped into the ring and hit the bad guy with his shoe! Luckily, he knew the local police chief and was escorted out a side door before being taken back to the dressing room to face a different fate.

While I certainly digressed there, it was around this time that I really began to appreciate James’ work at Kamala. The first match I distinctly remember watching was on Saturday Night’s Main Event as he destroyed poor Leaping Lanny Poffo. I was hooked, and over the coming months, I followed his in-ring exploits religiously.

After his feud with Hulk Hogan, Kamala slid down the card a little. He was placed in a tag team with Sika the Wild Samoan and they made a big impression as Sika hit their opponent with a Samoan drop before Kamala came down off the top rope with a devastating splash. August 30, 1987 was the first time I saw wrestling live and the imposing duo were at Maple Leaf Gardens that day to take on Jim Powers and Paul Roma, who had recently defeated them via countout on Superstars of Wrestling. I was blown away as he came down off the top and nailed one of the Young Stallions with the big splash that night. The sea of flashbulbs going off was incredible and that moment sticks in my head nearly 33 years later. I even had his LJN action figure and items like trading cards and a 1987 Hostess Potato Chips sticker, but the one which stands out is an issue of 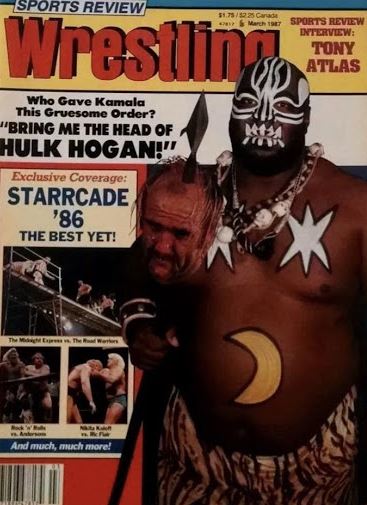 where Hogan’s bloody head was placed on a spear Kamala was holding in an older photo session. It was shocking and certainly tasteless, but it stuck in the memories of wrestling fans.

Not long after, James moved on from wrestling for a bit and began driving a truck. He’d surface on occasion, most notably with the WWF once again in 1992 and WCW in 1995, but his life out of the ring was shrouded in mystery until I got the idea to track him down. Greg Oliver gave me the go-ahead to start digging and after countless calls and emails, I finally got a lead on him in his hometown of Senatobia, Mississippi, soon after his appearance in the Gimmick Battle Royal at WrestleMania X-7. I took a deep breath and dialed the phone – and thankfully, someone picked up!

At first, I had to gain his trust and spent quite a bit of time speaking with his wonderful ex-wife, Clara, who finally got him on the phone with me. We spoke initially for well over an hour and after the article came out, we began to build a friendship. A strong one, really. He had a sharp sense of humour and was incredibly kind. We talked about the possibility of working together on his autobiography. A draft was completed from his original typewritten manuscript and a few pitches were made, but he was hesitant to fully go forward on the project until several years later with another author – a decision that came as a bit of a surprise, but I ultimately understood. 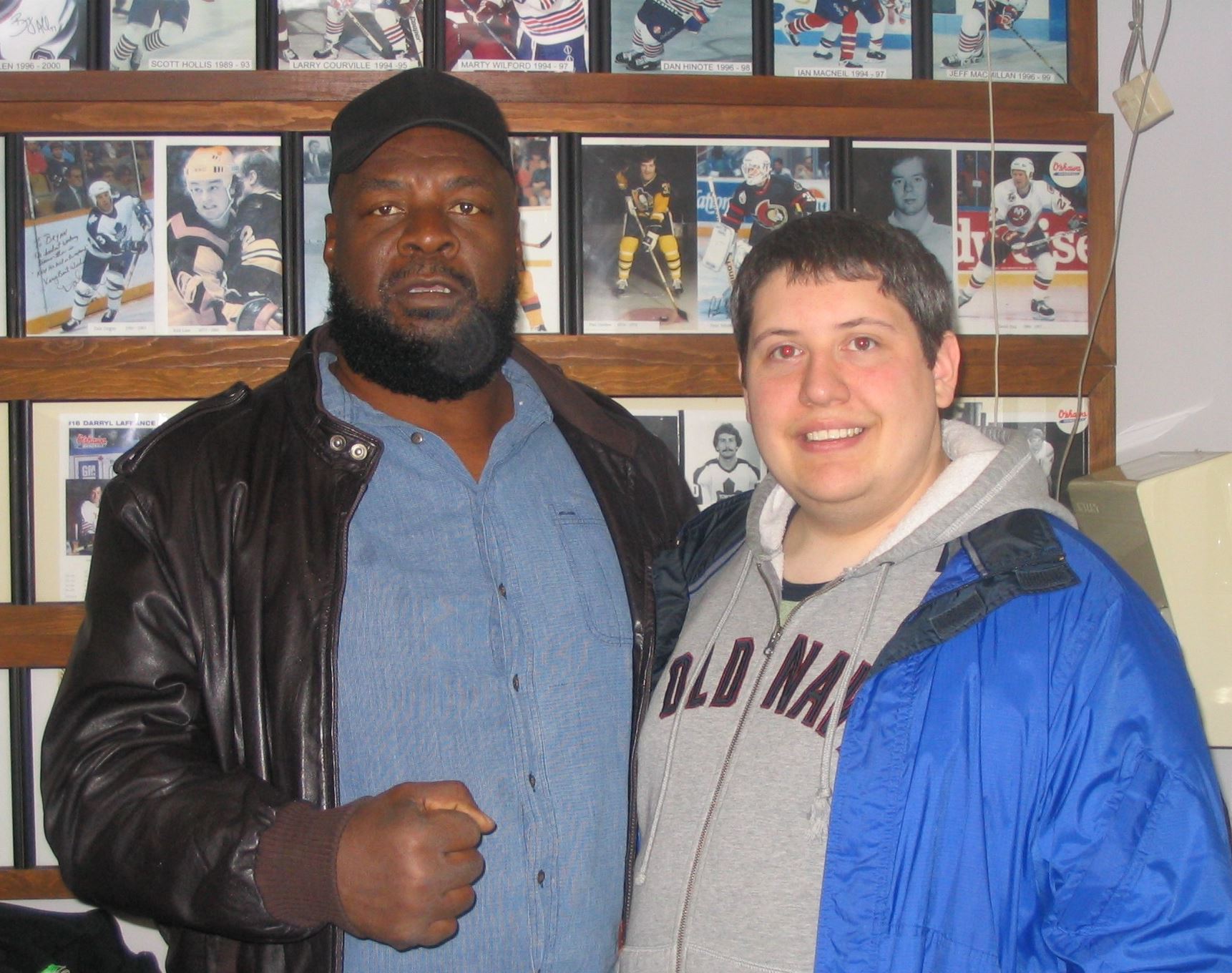 In 2005, we finally met in Oshawa, Ontario (you’ll see my dorky haircut from that era in a picture I have provided SLAM! Wrestling with) and we hung out a bit before the show. It was a surreal experience sitting with him as his back was turned away while he put on the iconic makeup, and once he turned around, it was like something out of a dream. Seeing one of your childhood heroes face-to-face in a costume you associate them with is a memory I’ll never forget. From there, we headed downstairs to wait for a van to go to the arena and it was incredible sitting in the lobby of the Best Western as King Kong Bundy, Koko B. Ware, and the duo of Jim and Nattie Neidhart came down to join us. My hand still hasn’t fully recovered since she crushed it.

It was nice to hang out with him over the next couple of days and we made sure to get a picture together before we left. The last time I saw him was in 2009 when he came up to Toronto for an event, but I never expected it to be the last time. We stayed in touch a little bit via Facebook in the years that followed, but the last time we chatted on the phone was just after he had his first surgery to remove part of his leg. He was a bit groggy, but I gave him some encouraging words. It hurt to see him suffering like that and it was heartwarming to see so many of his fans be so supportive in that time and the years that followed.

On the surface, Kamala’s legacy is an incredible one as James Harris lived his gimmick and had legions of fans. He gave his all and was greatly respected by his peers, but the treatment he received from promoters due to the colour of his skin was, and is to this day, truly appalling. I know this weighed on him greatly and caused him great upset at times, even sharing with me that he once had to pull over at the side of the road to cry after passing by the WWF building in Stamford, Connecticut, since he was overwhelmed with the emotional reaction he had.

He was a world-class talent and was not afraid to tell his story in a frank manner, not worrying about repercussions from the wrestling establishment. I would hope that you would not see a gimmick like his happen today, but it was a product of its time. One one hand, it allowed him to break out as a star and provide for his family, but it also caused some heartache. Wrestling has never been culturally sensitive, and it has many difficult moments that make us cringe when we look back, but James managed to rise above it. The stories he told me about the adversity he faced were jaw-dropping and it shaped the man he was. He was understandably bitter at times about some things, and I don’t blame him for feeling that way. He deserved so much better.

Rest in peace, my old friend. It was a pleasure to break kayfabe with you and the world was a better place because of everything you did.