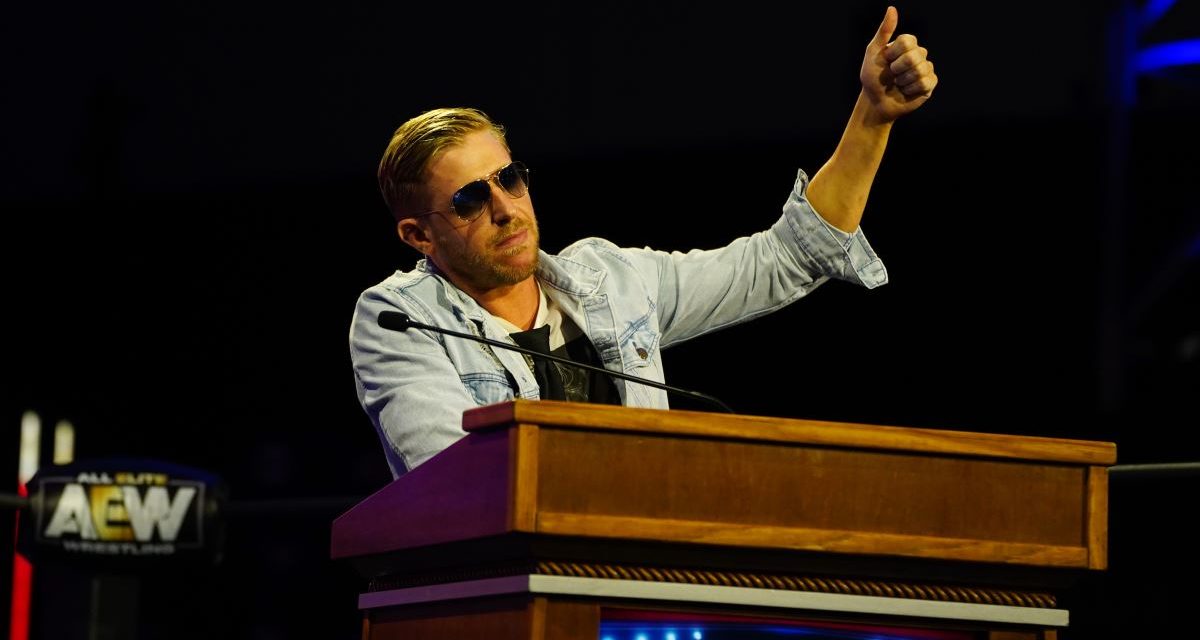 The era of AEW Dynamite at 8:00 p.m. is coming to an end — for a little. See, the NBA Playoffs are coming up soon (in August this year, because 2020), and TNT is a big part of their broadcast plan. Thus, Dynamite needs to move for a few weeks. When, and to where? Ah, guess you’ll have to read the entire report to find out! Or, you know, just scroll down to the end. Let’s get to Daily’s Place and get right into the action.

Match 1 – The Elite and FTR vs. Dark Order

The Dark Order has so many members now that even with a 12-man tag match going on(!), the group still has two members standing over by the announce table. Makes you wonder how many faces would have to join forces to even out the numbers in an all-out battle. Dax Harwood is helped to the back with an injury that looks legit, which would be a shame if it is indeed the case. Hangman Adam Page, who left the action to assist Harwood, returns to help his team regain a foothold in the match. There’s a tease of continuing drama between Mr. Brodie Lee and Page, which makes sense since Lee offered him a place in the Dark Order, as well as more of Colt Cabana seemingly enjoying life as an associate of the stable. The match itself likely won’t win over people who feel AEW is too much of a spotfest, but there’s also some good storytelling going on here before Dark Order claims victory.

Earlier today, Best Friends pull up in Trent’s mom’s minivan. That’s kind of its own joke.

Prior to his title defense, Jon Moxley waxes philosophical about how he was earlier in his career, when he did his own thing and didn’t listen to anyone, more often than not. So he gets why Darby Allin challenged him, but in an ironic twist, it’s turned Mox into the advocate, the guy who is concerned about someone else’s health. He doesn’t want “ended Darby Allin’s career” on his resume, but with the title on the line, he has to do what he has to do. All he asks is that when it’s time to stay down, just stay down … even though he knows Allin isn’t going to listen, because he wouldn’t.

Santana and Ortiz, jobbers? Well, not exactly, but it’s fair to wonder if they’ll be given a win here or become the latest stepping stone for Best Friends, who have not only gone over in most of their 2020 matches to date (11-1 in tag team bouts) but are getting an extra rub by hanging out with Orange Cassidy. The Inner Circle duo ends up looking pretty strong since they are in charge late and the faces have to steal a victory, but the fact remains that they are floundering a bit at the moment.

Next up is a check-in at MJF’s campaign headquarters, where he berates his staff and celebrates himself. You know, the usual MJF stuff. He’s excited that his championship match with Moxley has been confirmed for All Out, and when asked what happens if Allin wins the belt tonight, he dismisses the challenge in wrestling a “125-pound emo kid.”

Back in the ring, Matt Hardy discusses his reasons for joining AEW, which boil down to having more control over the direction of his character and career. On-screen, Hardy says he will concentrate on being himself, but he wants to give back to younger talent when he’s not in the ring. He gives a shout to Private Party, saying he’ll always have their back, before turning his attention to Sammy Guevara. That means being ready when Sammy tries to sneak in the ring and attack him from behind. What Matt didn’t say is that he’d bleed for AEW, but after Guevara flips off the stage to put him through a table, that’s exactly what he’s doing.

And there’s something happening outside too. Oh no, not Trent’s mom’s van! Santana and Ortiz take a sledgehammer to the vehicle, so if you didn’t think it was foreshadowing when we saw them pull up in that van … well, you were wrong. Sorry, Sue.

Whoa, Cardona has pyro already. Jim Ross nearly slips up and calls him by his WWE name, which both he and Taz laugh about. Cardona is also laughing at the end of this match as he gets the pinfall for his team in his in-ring Dynamite debut. 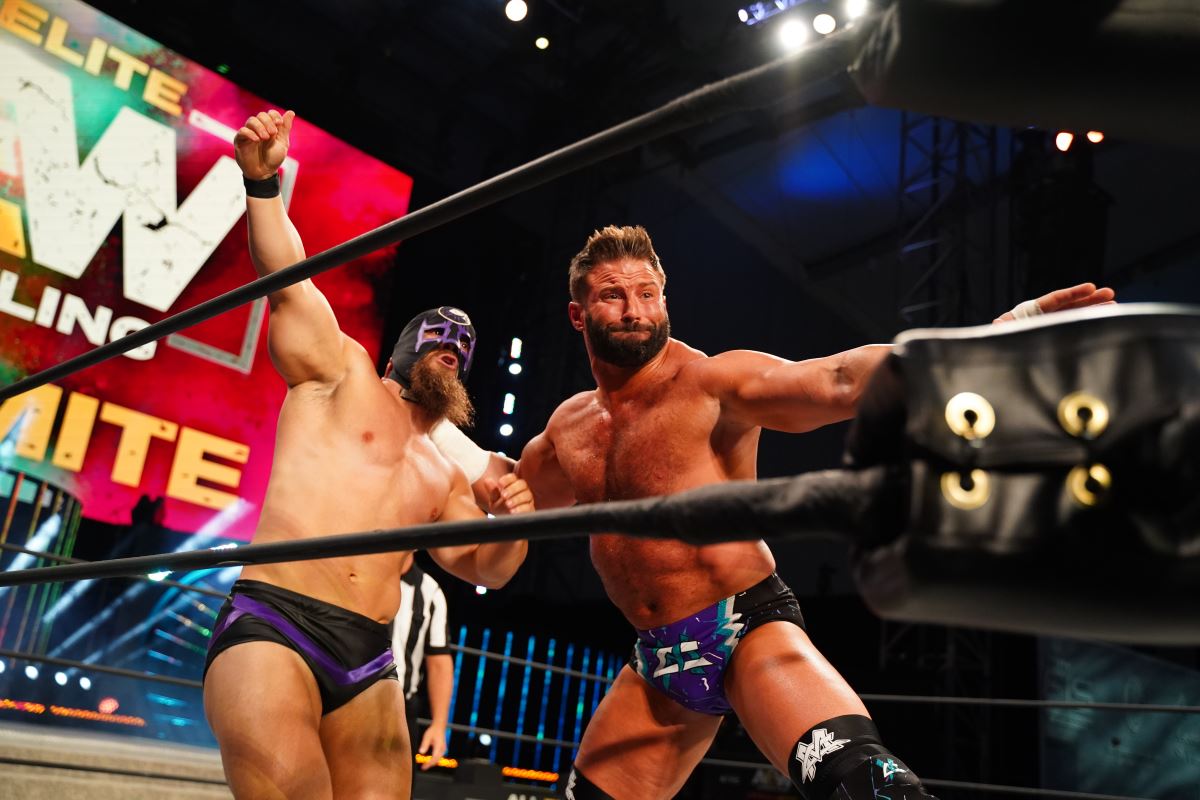 As Cody heads back up the tunnel, he passes by Scorpio Sky, who taps the TNT championship belt. Keep an eye on him as the next challenger.

Chuckie T. is despondent as he personally assured Sue he would take care of his van. And Trent says when they get their payback, he’s going to make them apologize to his mom by speakerphone.

The moment you’ve all been waiting for has arrived: AEW Super Wednesday Debate 2020. But before we get to the actual debate, we’re getting a special guest moderator. Holy crap, it’s Eric Bischoff! He’s much grayer than you might remember him from the heyday of WCW, but he looks great and it’s awesome to see him on TNT again. Also surreal. After Chris Jericho and Jake Hager arrive wearing suits, the Demo God mocks Cassidy for not dressing for the occasion. He does at least pull out a clip-on tie to put on his t-shirt. Jericho’s reaction when Cassidy gives a surprisingly eloquent response to a question about global warming. That plus his fiery insistence that he will defeat and embarrass Jericho next week cause Bischoff to declare Cassidy the winner, which enrages the Demo God. He orders Hager to punish his foe, then knocks him out cold with the Judas Effect. Best Friends get there a bit late, but in their defense, they’ve been a bit occupied tonight.

Reba is really wrestling as a proxy for Dr. Britt Baker, who is micromanaging her via bullhorn from ringside. It doesn’t help, as Swole wins in fairly quick fashion.

Wouldn’t it be wild if AEW actually let Allin win here? It seems extremely unlikely — and even though the promotion is clearly invested in helping Allin’s natural charisma blossom and turning him into a star — I’m not even sure he’s the wrestler who should be the one to knock Mox from his perch. Still, the tease in the MJF promo at least puts a sliver of doubt in there. We’ll see. There’s always the possibility of hijinks, and sure enough Wardlow comes out to distract the ref while MJF delivers a shot from the belt to Moxley. Allin hits the Coffin Drop but Moxley kicks out at two despite being busted open. After being hit by a second Coffin Drop, Mox slaps on a sleeperhold but can’t get the challenger to tap. Almost reluctantly, Moxley hits Allin with the Paradigm Shift and gives him a bloody hug after the ref counts to three. 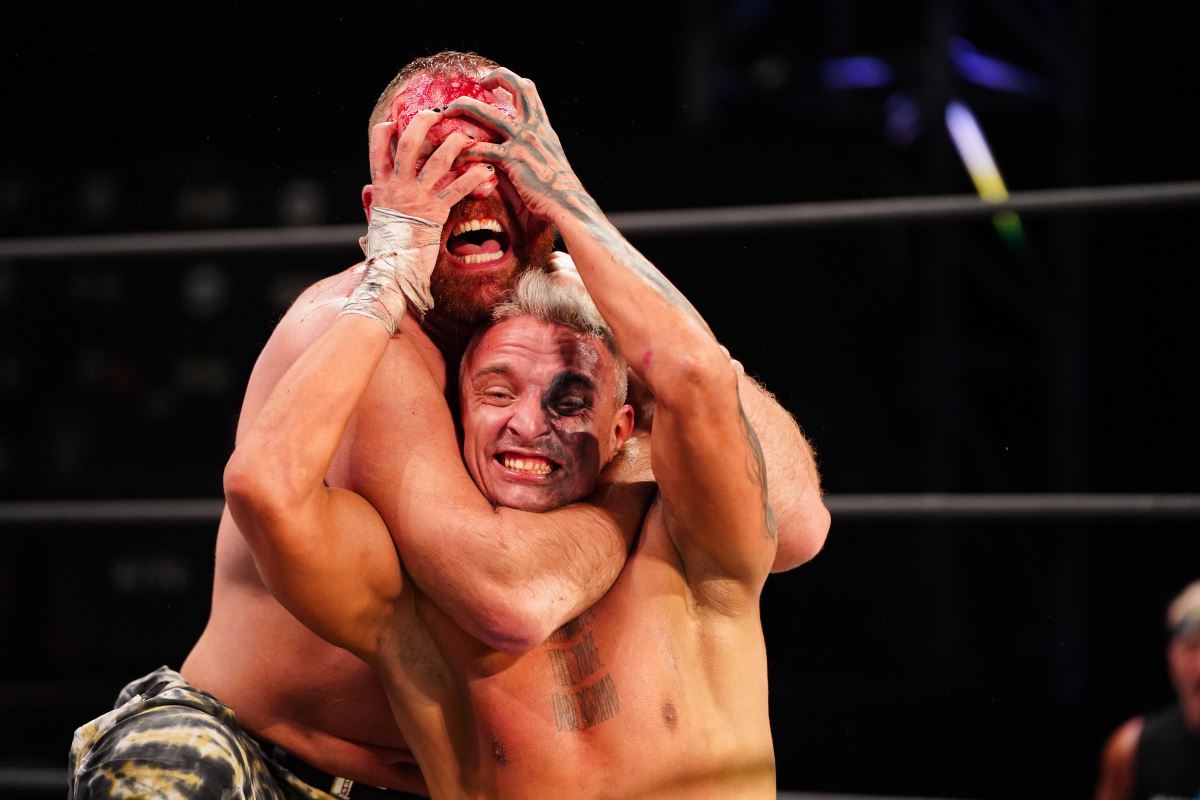 Darby Allin rakes at the eyes of a bloody Jon Moxley.

Epilogue: When is AEW Dynamite Moving for the NBA Playoffs?

Glad you asked. Dynamite is switching nights on three different upcoming weeks to accommodate TNT’s NBA obligations. Here’s when you’ll have to get your AEW fix sometime other than Wednesday at 8:00 p.m. ET:

This has been a public service announcement from your friends at Slam Wrestling. See you in seven!

Thanks to the first two matches kicking things off right, these two hours just flew by. The title match was very good for weekly TV, and the Orange Cassidy and Eric Bischoff stuff was enjoyable. A good time overall, and alas Sue’s van, we hardly knew ye.