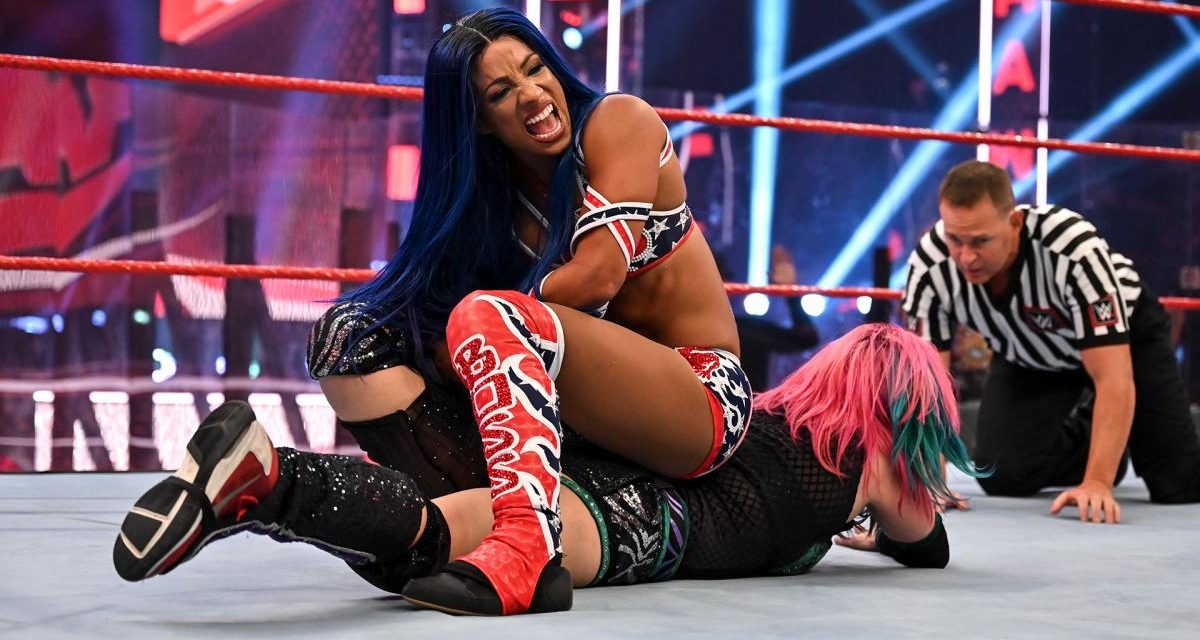 SummerSlam is over four weeks away, meaning WWE actually has some time for a build up to the biggest party of the summer. Will they pull it off? Probably not, but stranger things have happened. Maybe there will even be fans in attendance? No, that’s definitely not going to happen. As always, Monday Night RAW is coming to us from the Performance Center with Tom Phillips, Byron Saxton and Samoa Joe on the call.

Randy Orton makes his way to the ring. He knows he can do whatever he wants to whomever he wants and that won’t change. But something is missing. That something is the WWE Championship.  Orton respects Drew McIntyre for how quickly he beat Brock Lesnar, but McIntyre has was Randy wants. Orton now wants a champion match at SummerSlam. He tells Drew that he will never the see the RKO coming that beats him.

As Orton wraps up, Nia Jax makes her way to the ring. She wants a shot at the RAW Women’s title, inspired by Orton’s words. Shayna Baszler interrupts Jax, heading into the ring and telling Nia that no one cares what she wants. Jax strikes, tossing Baszler around the ring. The two brawl and have to be separated by WWE officials.

The RAW Tag Team champions, The Street Profits, talking about the upcoming number one contender match. They then do the ring introductions.

Andrade and Garza jump the Viking Raiders before the bell and toss Ricochet and Cedric out of the ring. The Street Profits chastise them from commentary.  We join the match in progress coming out of the break, unlike Andrade and Garza who are content to watch from the floor. The other four men decide not to fight, instead they go after Andrade and Garza on the floor, dragging them back into the ring.

A snap suplex sets up Andrade for a big kick from Ricochet. The alliance between the Raiders and Ricochet falls apart, with Ricochet working with Andrade to team up on Erik in the corner. Andrade with a running knee in the corner and then pulls Ricochet off the pin. Ivar with a suplex and a splash to Andrade. Garza catches him with a super kick out of nowhere. Erik makes the save, dropping Garza in the corner with a double knee strike.

After another break, Ivar is slammed into the barrier by Andrade and Garza. In the ring, Andrade his Erik with the double knees. Ricochet with a flying elbow to Garza and follows with a standing shooting star press. Andrade hits a back elbow to Ivar, only to get taken down by Erik. Garza with a kick to Erik from the apron. All the while, Ivar climbs the turnbuckle taking out Ricochet, Alexander and Erik on the floor. Andrade rolls Cedric into the ring for Garza, who hits him with the Wing Clipper. He covers and gets the pin.

The Street Profits show respect to the winners, but Andrade and Garza attack. They pummel the champs and throw the top of the announce desk at them.

The two waste no time going after each other. The fight spills to the floor. Shayna is slammed face first into the plexi-glass. The ref makes the count as neither woman is interested in heading back to the ring. The ref makes the ten count and calls for the bell.

The two continue to fight after the bell. Security tries to break them up, to no avail. Nia beats up a WWE official as Shayna is held back on the floor.

Backstage, Seth Rollins wants to know if Murphy is with him. Seth thinks Dominic will show up because he just can’t get out of his own way. The Greater Good will move forward and tonight will be different.

Backstage, Ruby Riott and Bianca Belair are catching up with Mark Henry.

Seth Rollins makes his way to the with Murphy in tow. He knows he should be happy, but Dominic Mysterio is standing in his way and every time someone does that, they get hurt. Seth wants Dom to come to the ring. He doesn’t want him to hide; Seth doesn’t want violence.

Dominic walks out on stage as Seth practically begs him to come to the ring. Murphy even holds the ropes open. Dominic enters the ring, as Seth offers his guidance and help to the young man. Dominic attack Seth with a double leg take down. Murphy comes to help and Dom is overwhelmed. They toss him into the ring barrier and put the boots to him. They slam him into the side of the announce desk. Seth screams he didn’t want this. Aleister Back runs down to make the save, but he gets over powered. Rollins hits the stomp on the floor on Black.

Rollins starts to lecture Murphy, yelling at to to finish Black. Murphy drags him to the steps and gouges his eye out on the corner. Rollins wants the kid found. Dominic finds Murphy with a kendo stick. He breaks to stick over Murphy and chases off Rollins.

R Truth wants to know if Ali is going after the 24/7 title on the MVP Lounge. Ali tells him he doesn’t, but Truth is still going to watch him.

MVP is flanked by Bobby Lashley and Shelton Benjamin. MVP says Extreme Rules didn’t go the way he wanted, but he got to meet a young man he never met before, Mustafa Ali.

He welcomes Ali to the lounge and puts on the hard sell for the Hurt Business. Ali wants nothing to do with it, you know, since he helped beat MVP at Extreme Rules. MVP doesn’t want Ali to go down the path that Apollo Crews did. Ali wants nothing to do with MVP. R Truth attacks Shelton Benjamin out of nowhere, but he can’t get the pin for the 24/7 title. Truth runs off.

Akira Tozawa climbs out from under the ring and rolls up Benjamin, who kicks out. Tozawa is slammed into the barrier. Lashley then fights off the ninjas on the floor. Ali surprises Lashley with a suicide dive as Lashley was preoccupied with a ninja.

After a break, Lashley catches Ali on a springboard and sends him to the floor. Ali is run into the ring post.  MVP taunts Ali, as Lashley rolls him into the ring. Ali takes more of beating before being locked in the Full Nelson. Ali taps out.

Dolph Ziggler still doesn’t know what the stipulation is for his match tonight with Drew McIntyre, but he tells Charly Caruso that he will win the title at SummerSlam, not Randy Orton.

Before the match, Sasha calls Stephanie McMahon a bully and calls her jealous. She claims they run the company. Bayley gives a half-hearted attempt at explaining her actions at Extreme Rules.

Kairi Sane runs Bayley off before the match even starts. Tom Phillips remind us that the belt can change hands on a DQ or count out.

The two trade drop kicks to start the match. Asuka with a series of kicks and hits a shining wizard. Sasha catches herself on the ropes. Asuka runs into a boot, allowing Banks to lock in an arm bar. Asuka reverses the hold, but Banks is able to get to the ropes. Sasha nails a backstabber out of the corner ropes and then locks in a single leg crab.  Banks smashes the knee into the canvas. Asuka kicks free, sending Sasha to the floor. Banks wants to walk away, grabbing both belts. She slides the tag title into the ring. With the ref distracted she fakes getting hit with the RAW title, but the ref doesn’t believe her. Asuka connects with a big kick.

After a break,  Banks ties up Asuka in the ropes. The champ answers with a knee strike, sending Banks to the apron. Sasha dodges the hip attack and Asuka lands in the ropes. Banks yanks her down and hits the meteora. She locks in another single leg crab. Asuka breaks free and locks in a knee bar. She flows into an ankle lock. Banks breaks free, send Asuka face first into the middle turn buckle. Banks with the double knee strike. She goes up top, but jumps into a knee strike from the champ. Both women are down and the ref starts his count. They get to their feet at the eight count.

Sasha locks in the Banks Statement, but Asuka is able to break free. The champ is sent to the floor and dodges a baseball slide from Banks. Sasha drops Asuka onto the announce table. The ref starts to count with Asuka on the floor. She just beats the count. Asuka with a roll up that Banks counters into the Banks Statement. Asuka counters into an ankle lock. Asuka leaps to the turnbuckle and nails a dropkick. She looks for the Asuka lock as Bayley and Kairi Sane are fighting on the TitanTron. Asuka has the hod on, but is also watching the tron. She releases the hold, running to the back to save Kairi. The ref starts his count. He counts Asuka out, giving Banks the win and the title.

After the break, Charly Caruso delivers an update on Kairi Sane; who is being evaluated by the trainers. Sasha and Bayley celebrate. Asuka walks out of the trainer’s room and she is furious.

WWE pays tribute to Regis Philbin, who passed away on Friday.

Drew McIntyre walks to the ring. He addresses Randy Orton first, accepting his SummerSlam challenge. Drew warns him that he will see the Claymore Kick coming.

Dolph Ziggler walks down, ready for their match. Drew tells him that tonight, they will have an Extreme Rules match and punches him in the throat.

Dolph connect with a super kick on the floor. Drew picks Dolph up, throwing him into the plexi-glass and breaking it. The champ works Ziggler over with a kendo stick. Drew tosses chairs into the ring and brings a table to the party. Ziggler with a low blow, sending Drew to the floor to recover. Ziggler repays the earlier punishment with a kendo stick. McIntyre strips Dolph of the kendo stick, but Dolph counters with a kick to the knee. McIntyre catches Ziggler leaping off the apron and drives him through the security barrier. We go to commercial.

After the break, McIntyre with a belly to belly suplex. He goes up top and drops a forearm on Ziggler. Dolph takes out the knee of Drew and hits a famouser. Dolph pulls himself up the ropes and goes up top. McIntyre catches him with a chop and delivers a superplex. McIntyre looks for the Claymore, but Dolph counters with a Zig-Zag. Drew kicks out. Ziggler grabs a chair, but Drew sends him through a table with a Claymore kick. McIntyre covers and gets the win.

After the match, McIntyre celebrates only to get hit with an RKO out of nowhere from Randy Orton.  That’s the show, see you in a week.

Another solid effort by Monday Night RAW. The women’s title match was great, until the end. WWE just keeps missing on these match endings. The build to SummerSlam started tonight and there are two matches all ready set. The tag team contender match is also worth a watch.