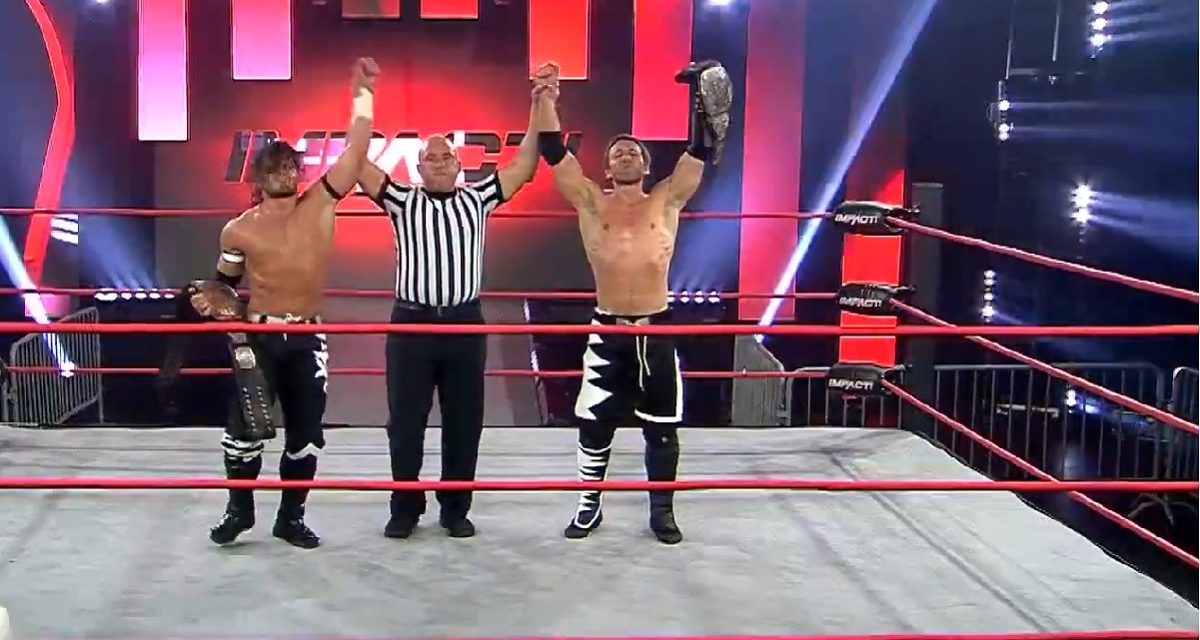 After its well-received Slammiversary PPV, Impact Wrestling put the focus of Tuesday’s show on many of the stars that returned to the company on Saturday night. The end result was to set the plate for a few fresh feuds and – more notably – to show how much of an impact (pardon the pun) these returnees have, as evidenced when the Motor City Machine Guns dethroned The North to become Tag Team Champions.

The show started with a video from EC3 who gave warning to everyone that he was going to control the narrative starting tonight.

Willie Mack vs. Chris Bey (c) – for the X-Division Championship

Bey started off on fire with a running dropkick right at the opening bell. Willie recovered and started some ground and pound clobbering, but Bey was able to escape. After a bit of an exchange, Bey thought he had Mack in trouble when the big man went to the floor. But in an impressive moment, Mack caught Bey flying off the top turnbuckle and slammed him hard on the outside. In the ring, Bey avoided a charging Willie, and clamped on a headlock that nearly put Willie to sleep. A standing moonsault went wrong, though, and Willie took over with a huge flying uppercut. But then Bey moved when Willie went for a Superfly Splash, and the big man went splat. After that, Bey ended things with a Springboard Cutter that put Willie down for the count.

Josh Matthews and Madison Rayne ran down the results of Slammiversary.

The Good Brothers (Luke Gallows & Karl Anderson) hit the ring with some mics. Despite saying how excited they were to be there, the two of them cut a pretty low-energy promo. They took credit for the social media buzz success of Slammiversary, and hyped their TalknShop-a-Mania PPV and beer brand. Ace Austin and Mad Man Fulton came to the ring, called themselves the top guys in the company, and asked for an apology for the Good Brothers’ attacking them on Saturday. As can be expected, this didn’t sit well with the Good Brothers, who got the best of things when the two teams threw down.

Backstage, Heath tried to get into the building, but security didn’t have him on the list. Heath made a phone call, presumably to Rhino. But Rhino was backstage jaw-jacking with Hernandez about the money they’ve been arguing about. Rhino suggested a match between the two of them, winner take all. Heath had a great line in his short segment – security asked him what his last name was, and Heath said that he used to have one, but he wasn’t allowed to use it anymore, so it’s just Heath from now on.

Chris Bey was entertaining a couple of women in his dressing room when Rohit Raju crashed the party. He congratulated Bey on his title win, and offered his protection services to the champ. Bey wasn’t too receptive of the offer.

Kiera Hogan and Tasha Steelz vs. Neveah and Havok

Neveah and Havok took early control with their strength, rocking Hogan with a bunch of hard-hitting moves. But the scrappy Steelz and Hogan were able to grit it out – and some clever cheating helped -and soon they had Neveah down and in pain. Neveah tagged in Havok, though, and things spun out of control after that. Havok had Hogan up for a Tombstone, so a desperate Steelz saved her partner by clocking Havok with a steel chair. Neveah then brought in a chair and Steelz ate a taste of her own medicine. Havok was able to withstand the chair shot and dropped Hogan with the piledriver anyway, but by this time, the match was over, and a downed Steelz and Hogan scrambled away.

Winners, by disqualification: Neveah and Havok

This week’s Flashback Moment was Eddie Edwards beating Bobby Lashley to capture his first Impact World Championship, way back in 2016.

Backstage, Sami Callihan yelled at Ken Shamrock for losing them match on Saturday. Shamrock acknowledged his mistake, noted that he was angry with himself, and said they would talk about it next week.

Backstage, Rob Van Dam and Katie Forbes plugged her new website, which will be previewed on the show next week.

Right after the bell rang, Rhino gave his money to the ref to hold on to. Then Hernandez did the same. But right after he did, Rhino charged, hit the GORE! GORE! GORE! and got the quick win.

Backstage, The North disputed the accolades people have been putting on The Motor City Machine Guns, saying that they are the best champions of all time, and will remain the same after their match tonight.

They aired a quick montage of quick-hit promos, and showed footage of the roster celebrating Eddie Edwards’ championship win on Saturday.

Backstage, Gia Miller asked the new Knockouts Champion Deonna Purrozza about her plan to stay champion. Kylie Rae came up and introduced herself as the number one contender to the title. Deonna baited her with a handshake and tried to lock on an armbar, but Kylie luckily escaped. They had a brief skirmish before it was broken up.

The new Impact World Champion Eddie Edwards came to the ring. He said that he was happy with his journey back to the top, but now a new journey must begin. He said he wanted to be a champion that everyone could be proud of, both the roster and the fans. To start, he said he would be a fighting champion who would defend the title every week against anybody who feels like they deserve a title shot. This brought out Eric Young who said that Eddie didn’t have any control over what happens to him or to the title, because Eric is in control of things now. Eddie disputed the point, not with words but with action, hitting Eric with a flying dive and pounding him until referees came and pulled them apart.

Backstage, Gia asked Moose if he would follow Eddie’s example and defend his TNA World Heavyweight Championship against anyone who felt they deserved an opportunity. Moose said his title is too prestigious to allow anyone to compete for it, so he would be picking his own opposition. His first hand-picked opponent is Fallah Bahh.

Backstage, Gia asked Eddie Edwards who he would be giving the first title opportunity to. Trey Miguel came up to him before Eddie could answer and challenged him for next week. Eddie accepted.

Josh Matthews kept hammering home that the title was not officially recognized, even though . So why treat it as such? Moose used his power to take down Bahh, and used some old-school heel tactics like stepping on Bahh’s face and choking him out on the ropes. Bahh tried to use his girth to steamroll the champion, but Moose was just too powerful, and after almost a glorified squash, he hit the Spear to get the win.

After the match, EC3 hit the ring – despite not actually working for the company – grabbed Moose from behind, dropped him with Falling Reverse DDT, and skedaddled.

Outside the arena, Ace Austin drove up to the Good Brothers, and as they confronted him, they were attacked by Reno Scum.

John E. Bravo and Rosemary went to Bravo’s condo. She flirted with him, but he nervously brought up his lack of experience with women. As Rosemary tried to make her move, they were interrupted by Taya who happened to be upstairs, much to Rosemary’s dismay. Frustrated by this third wheel, Rosemary used her magic by snapping her fingers, and soon the place was full of other wrestlers including Susie, Johnny Swinger, the Deaners, and Crazzy Steve. They showed a graphic for the new reality show called “Wrestle House” which will debut next week.

They announced two matches for next week: Reno Scum will take on The Good Brothers, and Edwards vs. Trey for the title was made official.

The Motor City Machine Guns vs. The North (c) – for the Impact World Tag Team Championships

Page and Shelley started off with an impressive sequence that ended in a stalemate that would have had the crowd on their feet if there were any there. Alexander used his power to take control, but the Guns used their double-team prowess to regain the momentum, hitting both champs with big stereo kick combinations. Back from the commercial break, the Guns had Page in trouble, but some dirty tactics allowed them to turn things around and start putting the pain onto Shelley. The North did a great job of employing classic tag team strategy by cutting the ring in half and dictating the pace, hitting a number of power moves on Shelley. But Alexander got overconfident, and Shelley rolled out of a moonsault attempt, and was able to tag Sabin after Alexander crashed hard. The pace picked up and the Guns got a few near falls on Page. The North again used their power game and nearly got a pin after a sweet-looking Cutter-Wheelbarrow-Drop combination. They tried to end things with their patented finisher – a Burning Hammer Powerslam combo – but Sabin slipped out of Page’s grasp and rolled him up in a small package to get the surprise pinfall out of nowhere. It’s unfortunate that there was no crowd to react to the title change (a consequence of Impact doing the right and responsible thing), because the main event was really strong. Hopefully this feud continues for a while.

The show ended with the Guns celebrating their title win while The North looked on in disbelief.

After the show, as Jimmy Jacobs left the building, Heath – who was lying in wait outside – sneaked back into the building.

Solid show this week. The main event match was very strong, and the company set the table for some interesting matchups over the coming weeks – possibly with even more surprise returns.