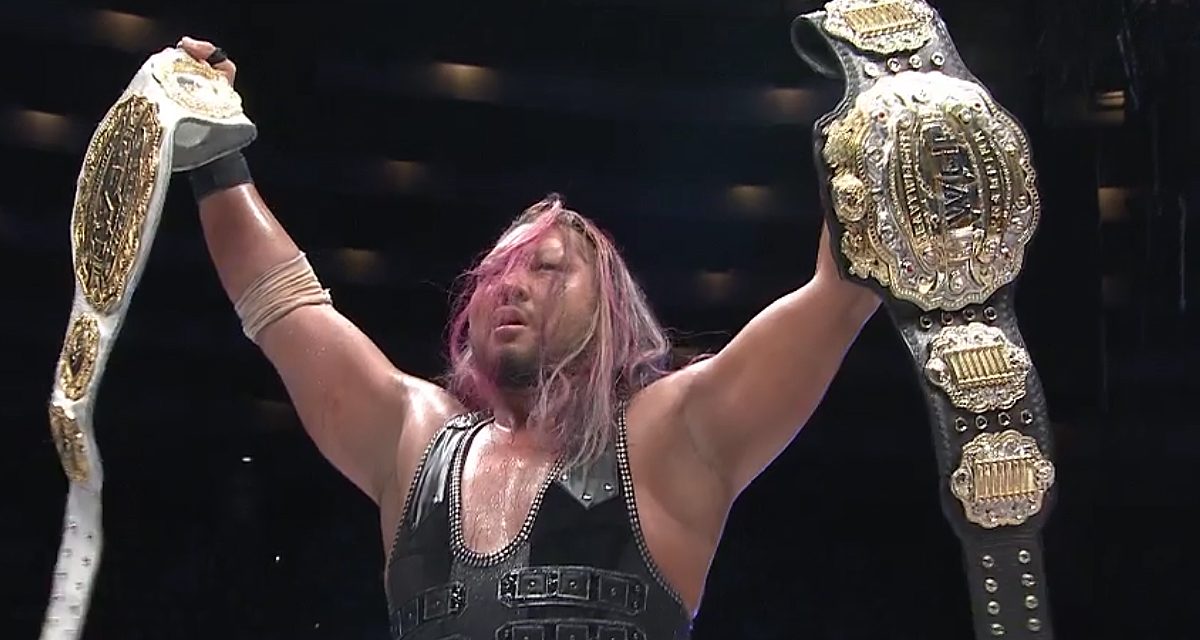 A new Evil has taken over NJPW.

Evil won the New Japan Cup tournament yesterday earning the right to face Naito tonight at Dominion. When he won the Cup, he promptly turned on LIJ and joined the Bullet Club faction.

Dominion represented a new chapter in the career of Evil (Takaaki Watanabe) who is engaged to the current WWE NXT Women’s Champion, Io Shirai. He had a new opening, theme song which he debuted at Dominion. His familiar robe, scythe, mask, the tolling of the bells are all gone. He kinda looks like a gladiator of sorts. Sorry, NJPW. Evil used to look like NJPW’s version of The Undertaker. Now, he has lost some of his magic.

Naito walked out his eyes never leaving the ring or the traitor Evil. He slid both titles into the ring at Evil’s feet. Gedo, Jado, Taiji Ishimori and Yujiro Takahashi from Bullet Club are all at ringside. They all do their ‘Too Sweet’ huddle. Red Shoes then bars them from ringside, sends them to the back and the crowd applauds.

Evil bails out of the ring once the bell rings playing mind games with Naito. Evil teases getting back into the ring a few times but ducks out. 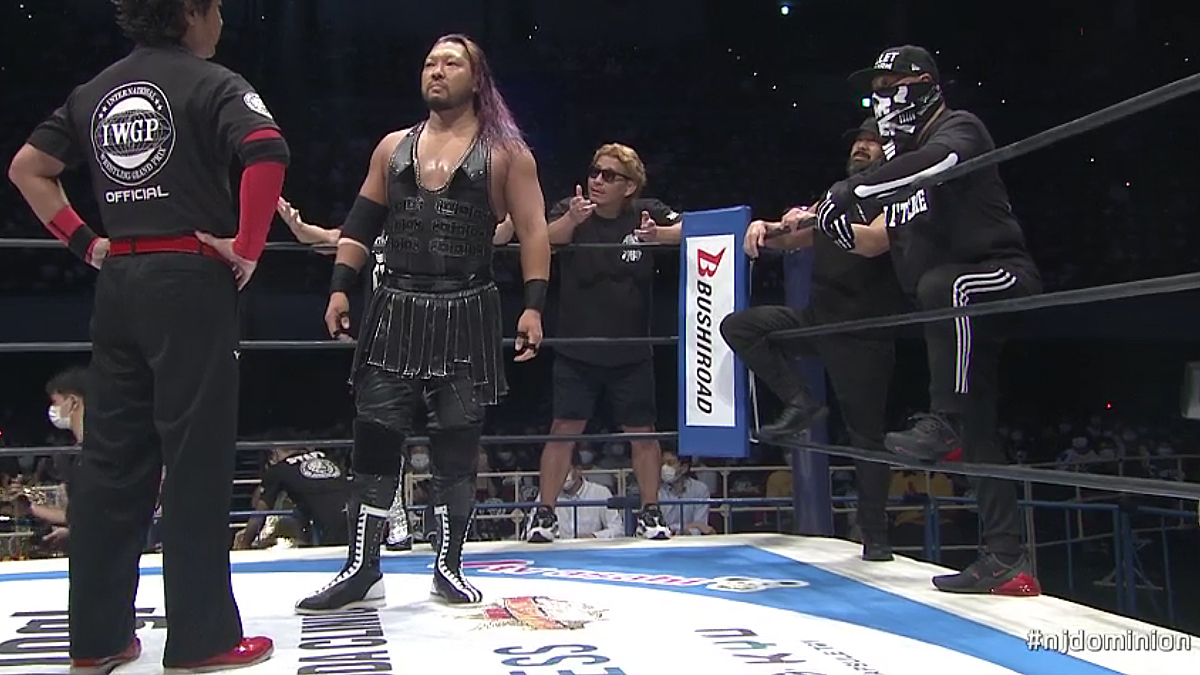 It comes as a shock that in his new Spartan gear, Evil didn’t shout out…Tonight, we dine in Hell! Courtesy: NJPW.

A furious Naito has had enough. He drop kicks Evil through the ropes, throws him into the ringside barrier three times, smashes his head on the announce table three times and hurls him back into the ring by his hair.

Evil clotheslines Naito over the ropes and to the floor. It is Evil’s turn to bounce Naito off the railings. Evil stretches Naito’s knee over the barrier while Red Shows lays down a count.

To further impress upon us that the old Evil is indeed dead and buried, Evil walks over to the announce table to snatch away Milano Collection A.T.’s replica of Evil’s scythe. Evil breaks it in half and throws the pieces at Milano.

In a very unwise move, Milano leaps over the barrier at Evil. Evil kicks him in the stomach throwing him into the ringside barricade.

The crowd really gets on Evil’s case and the announcers sound pissed off.

Evil goes back to wrenching Naito’s leg, knee over the barrier. The crowd boos Evil. Milano gets back to his feet sparking cheers from the crowd.

Evil whips Naito into the exposed turnbuckle which has been left that way since Toru Yano tore it off in a match earlier in the evening. Strange that. NJPW, get your officials in line.

Evil focuses all of his attention on Naito’s weakened knee and leg. Evil dares Naito to get up. Naito does slapping Evil in the chest, face. Evil stands and takes the punishment.

Naito puts Evil into a crucifix submission hold slapping him in the face. Evil reaches the ropes but Naito refuses to release the hold.

Evil sits Naito up so he can slap him in the face about six or seven times. A reverse atomic drop shifts Evil’s attitude as do a series of elbow and forearm smashes to the face.

Naito and Evil duel on the ring apron with a table below. Evil gives Naito a knee breaker from the apron through the table. 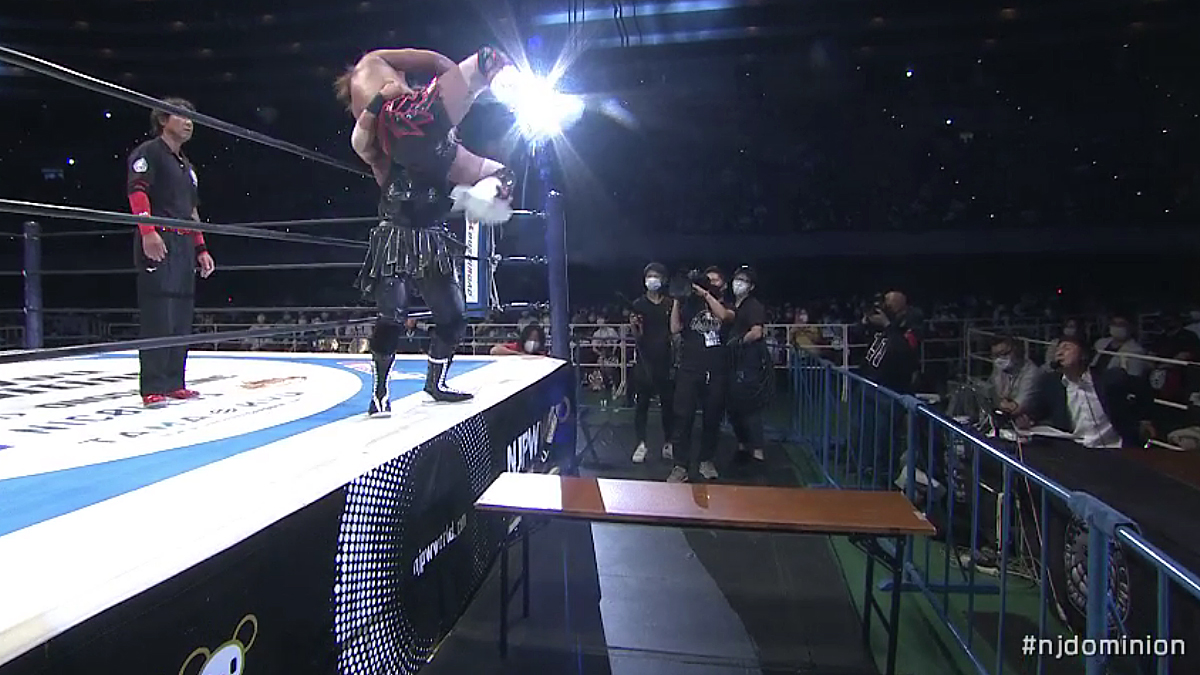 Evil pulls out two steel chairs from under the ring. He puts one around Naito’s knee. As he prepares the smash the knee with the other chair, Red Shoes steps between the two men holding a piece of the broken table up. The crowd cheers and claps loudly for Red Shoes. Evil backs off while Red Shoes checks on Naito.

Naito rams Evil’s head into the exposed turnbuckle. Naito hits a hurricanrana on Evil from the second rope. Evil kicks out of Destino though. Naito goes for a second one but Evil stops him with his brute strength. Evil whips Naito into Red Shoes. Red Shoes goes down rolling out of the ring.

Jado, Taiji Ishimori run down to the ring. Hiromu Takahashi intervenes before they can do any real damage. Evil lays in wait in corner. Underneath him is a steel chair. Evil turns around belting Naito in the stomach with it. Naito takes a chair shot to the head that is so hard it knocks out the seat of the chair. Naito lays motionless as does Red Shoes.

Naito has Evil where he wants him. Evil pulls at Red Shoes injuring him again. The crowd boos.

Someone wearing a Bushi mask but obviously not Bushi rushes the ring seemingly cheering Naito on from the apron. The man helps Naito up, forearms him in the face and chokes him out with a garrote. Naito passes out collapsing to the canvass. 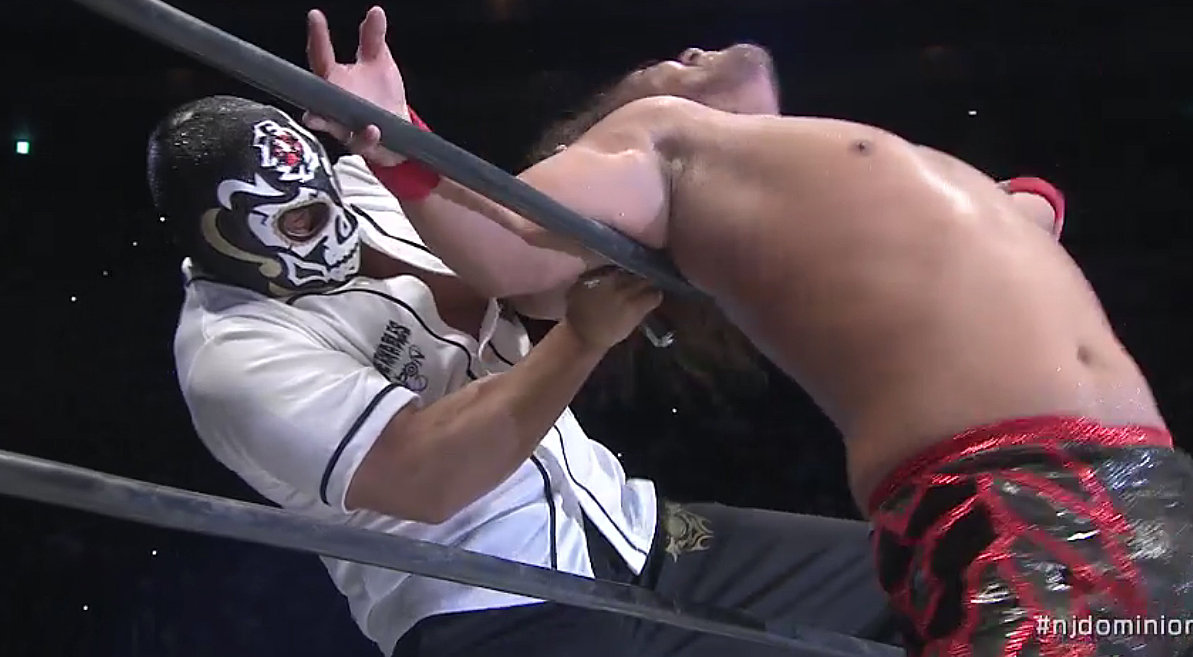 As the official argues with the imposter, Evil stomps Naito’s “lower abdomen”. Evil hits Everything is Evil to defeat Naito and win both the IWGP Heavyweight and IWGP Intercontinental Championships. The crowd is stunned.

The masked luchadore celebrates with Evil taking off his mask to reveal himself to be veteran Dick Togo. 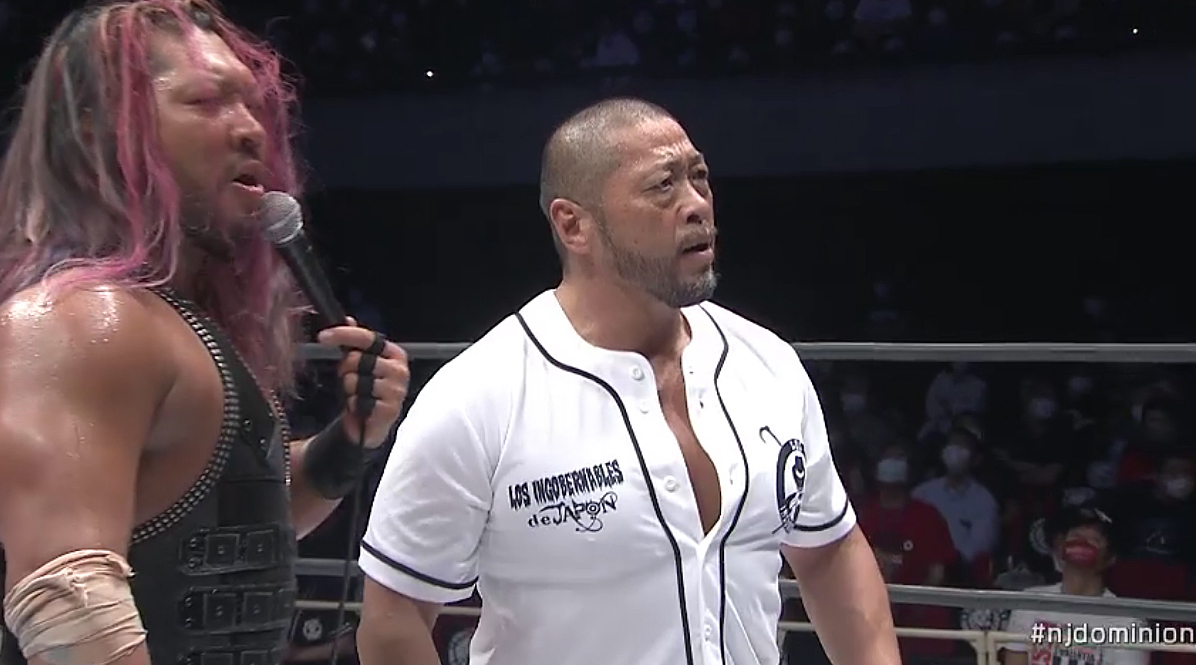 Togo was part of the Far East Connection with Gedo and Jado, a member of the Blue World Order in ECW and the original Kai En Tai in Michinoku Pro Wrestling.

Togo and Evil laid the boots to a fallen Naito until Hiromu Takahashi came to his rescue.

Honma and Kojima have a fun little back and forth…sadly Honma misses his Kokeshi. Honma though gives Kojima a taste of his own medicine with some chops in a corner. Taguchi tries his own humourous version of the Kokeshi and misses. Honma hits Taguchi with a perfect Kokeshi. Kidd riles up Nagata by slapping him in the face. Kidd submits to the Nagata Lock II.

Yano is turnbuckle crazy immediately removing one of them. Hiromu tattles on Yano to the official. Sanada rolls Yano around on the mat forever, gets a two count. Yano is dizzy, stumbling around the ring. Sanada puts Yano in the Paradise Lock but in the ropes, he does the same to the other members of the team, eventually releasing them all. Sanada hits the exposed turnbuckle. More trouble for LIJ as Hiromu accidentally knocks Sanada off the apron. LIJ gets back on track giving Tsuji a triple drop kick. Tsuji taps out to Hiromu’s Boston Crab submission. 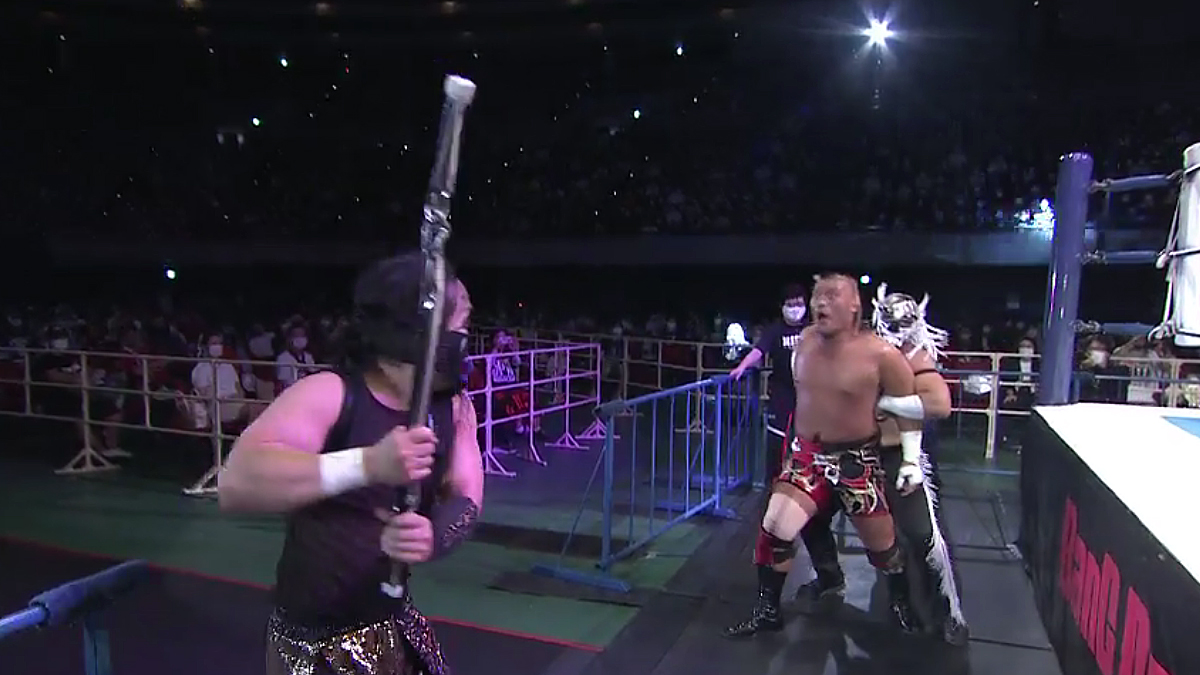 It appears that Tenzan has taken Wato under his wing. The faces beat Suzuki-gun by attacking them before the bell sounds. Kanemaru overwhelms Wato on the floor though. Tenzan and Wato double-team Douki. Kanemaru steps in grabbing Wato from the apron fouling him up. Everything breaks down with everyone fighting on the floor. Kanemaru singles Wato out dropping him throat-first on the ringside barrier.

As everyone else brawls on the floor, Desperado pins Uemura with a haymaker and Pinche Loco. Douki suplexes Wato on the arena floor. As Desperado holds onto Tenzan, Douki hits him in the stomach with his steel bar, scepter thingy. 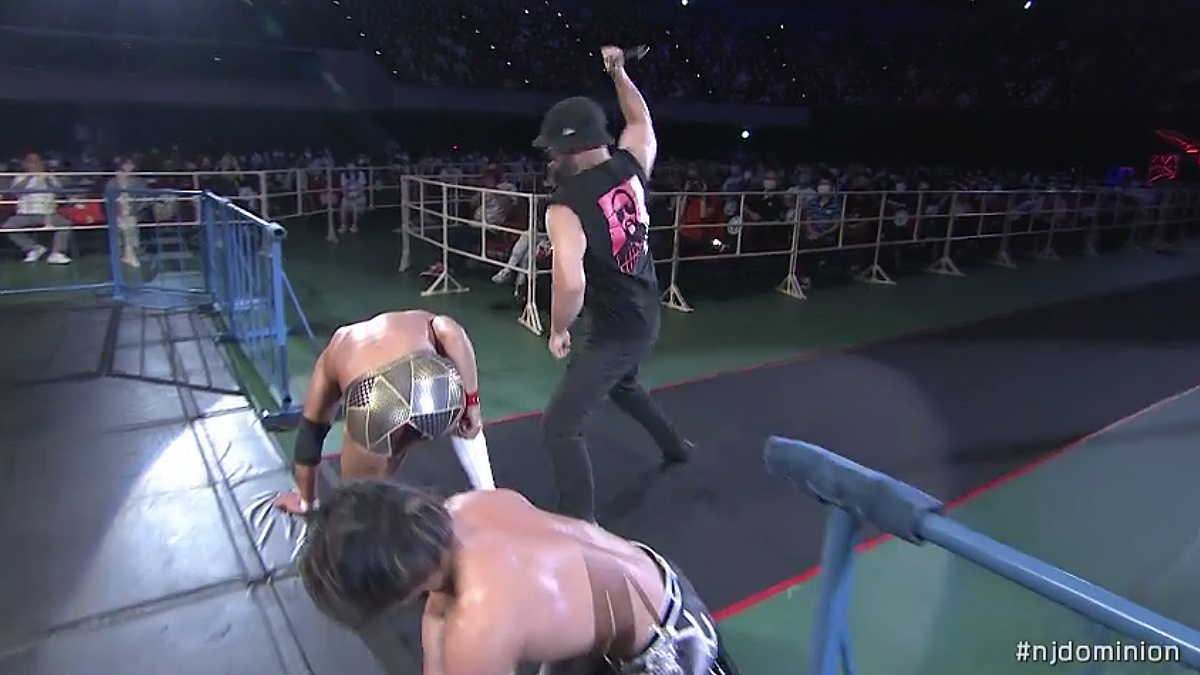 Taiji Ishimori and Yujiro Takahashi jump Goto and attempt to double-team Okada. Okada foils the heels. Okada throws Yujiro into a ringside barrier, kicks him over it. Yujiro suplexes Okada on the floor as payback.

Gedo interferes clobbering and choking Okada with a wrench on the floor. The official is too busy watching the action in the ring to notice. Ishimori delivers the Bloody Cross and Yujiro hits Pimp Juice to pin Goto. Gedo throws Okada back into the ring so that Yujiro can deliver a Pimp Juice to him as well. 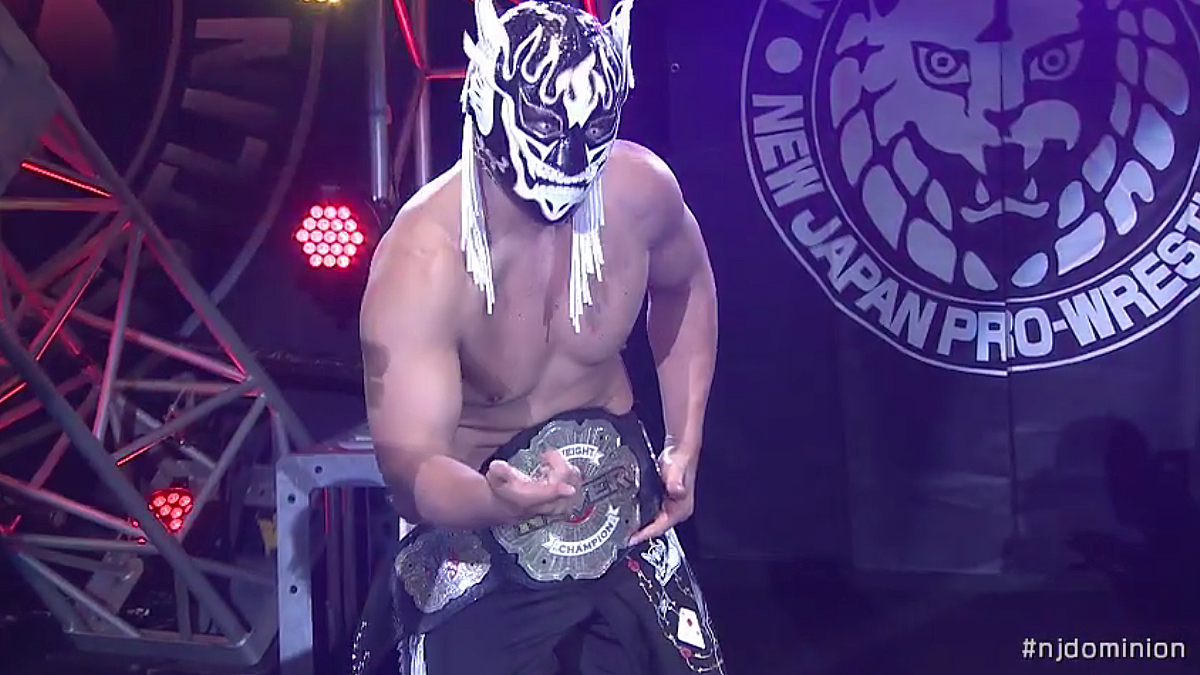 It is a test of strength at the start with both men trying to knock each other down with shoulder tackles of the ropes. Sho has Shingo totally off his game. He even no sells a German Suplex. Shingo is stunned by Sho’s continued blistering assaults. Shingo Takagi barely holds onto the title. He gets the 123 with a GTR on the ropes and a Last of the Dragon.

As he poses on the entrance way, Shingo is attacked from behind by El Desperado who punches him in face and hits him with the Never Openweight belt in the head. Desperado then just steals the belt. 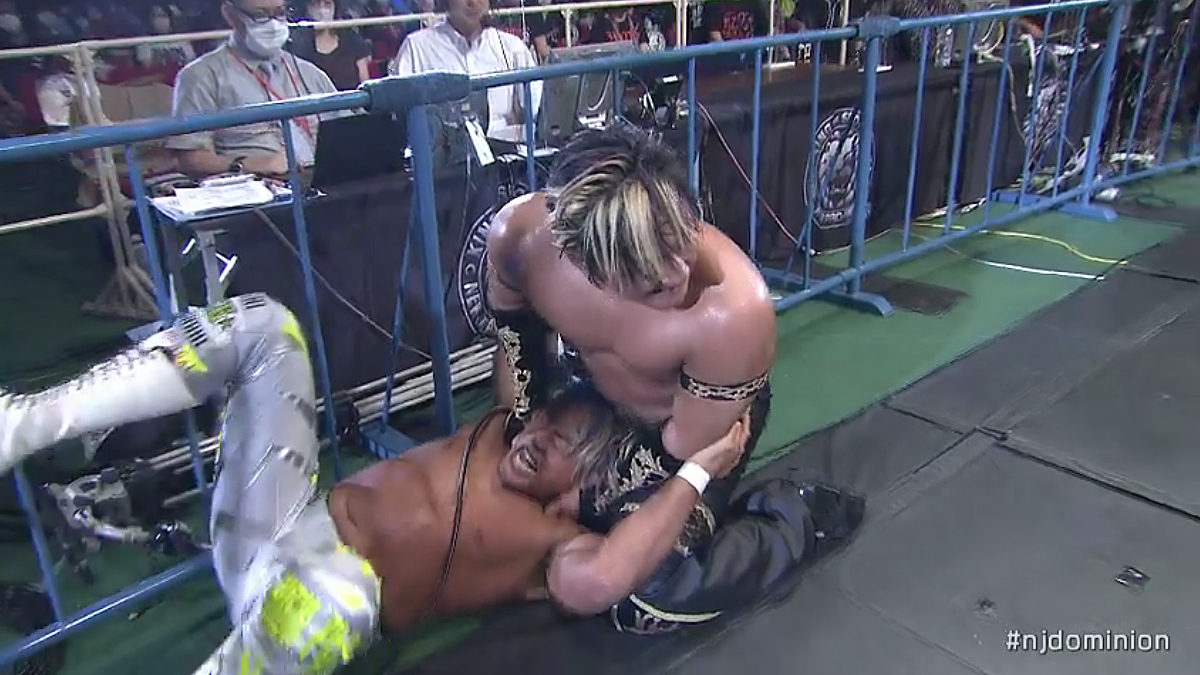 Things break down during Tanahashi and Ibushi’s entrance into the ring. A brawl erupts. Ibushi and Tanahashi double-team both Suzuki-gun members, clear them from the ring and then splash them on the floor. Suzuki-gun do some double-teaming of their own on Ibushi.

Taichi chokes Tanahashi with ring tape or a chain of some sort in the ring and out on the floor over a ringside barrier. Taichi then resorts to a camera cable to do even more damage. Once back in the ring, Taichi continues to choke out Tanahashi.

Ibushi is incapacitated on the floor. Suzuki-gun double-teams Tanahashi knee once again. Red Shoes just throws up his hands. Sabre Jr. spikes Tanahashi with a Zack Driver while Taichi gives him a Buzzsaw kick to the head for the pinfall.

A Young Lion offering Tanahashi is kicked and thrown out of the ring by Suzuki-gun. They continue to stomp on Tanahashi’s knee.

Still too many tag matches for my liking but a strong card overall with many above average bouts and lots of crazy surprises in the main event. It will be interesting to see where NJPW goes from here with Evil and Bullet Club back on top.