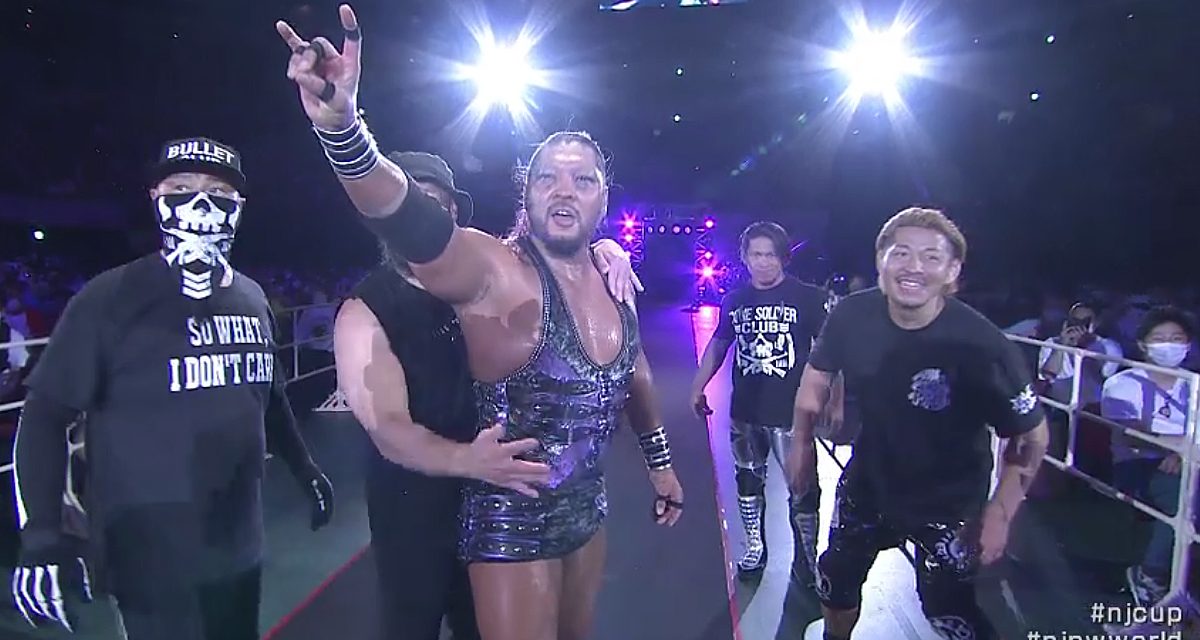 NJPW wrestling has done what no North American promotion has accomplished since the pandemic ramped up in Match.

They had actual fans in attendance for today’s show.

On June 15th, NJPW held their first show after being on a complete hiatus for 110 days. That show and those that have followed have been empty arena events.

At only 30% capacity, spaced out evenly and all wearing masks, fans filled Osaka-Jo Hall to witness the finals of this year’s New Japan Cup. The aisles the wrestlers walked to and from the ring were expanded greatly keeping fans at distance from the talent. There were also breaks so that crews could clean the ring properly.
Japan relaxed its guidelines for live events after lifting its nationwide state of emergency and a lockdown in May after infections dropped dramatically. 5,000 people in total can attend each sporting event.

Japan has had one of the lowest COVID-19 death rates at only 972 people. Officials attribute this to Japan’s cultural tradition and courtesy of wearing a mask in public if one has a cold, flu or even allergies and their stringent lockdown rules. 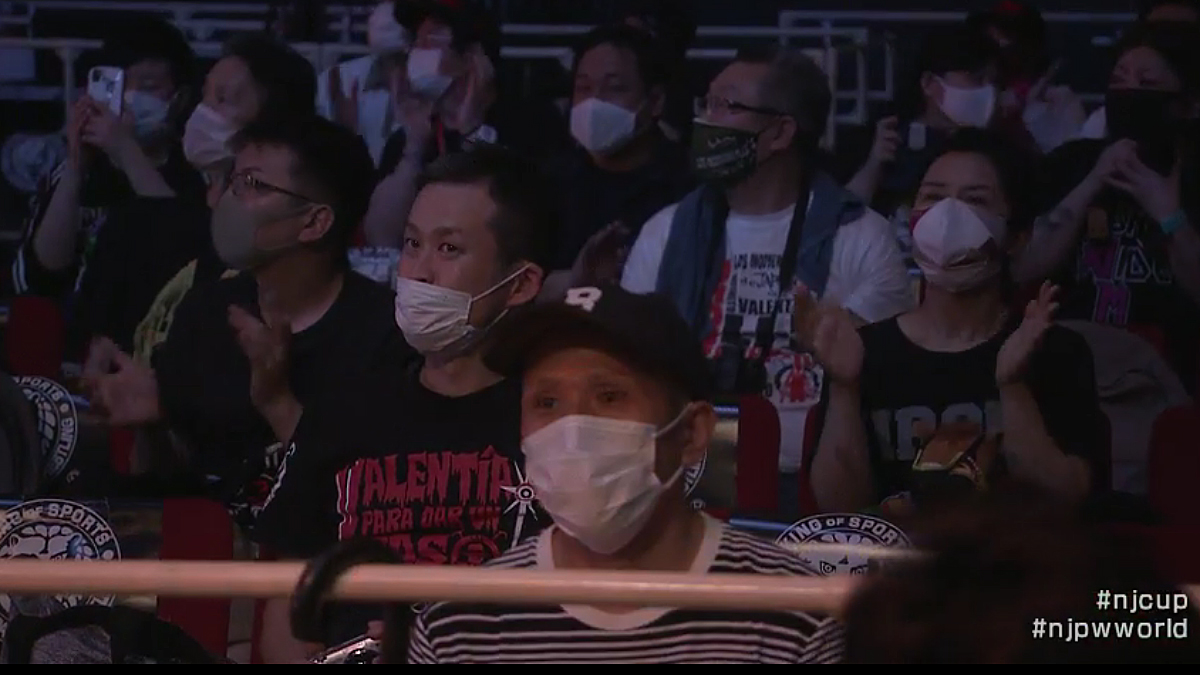 The finals of the New Japan Cup will go down in infamy not because of the match itself but what happened afterward.

Minutes into the match, Evil hits Darkness Falls but Okada kicks out. Okada blocks Everything is Evil then rolls out of the ring, falling onto the floor holding his neck and head.

Evil stomps him. Okada shoves him into the ringside barrier and throws him back into the ring where a neckbreaker now has Evil holding his neck and head.

Evil guillotines Okada’s arm over the top rope before he pulls him out of the ring throwing Okada into the barrier on one side of the ring and then the other. Red Shoes runs into action as Evil pulls out two steel chairs from under the ring. Evil shrugs Red Shoes off. Evil wraps up Okada’s arm in a steel chair and slams both into a steel post.

Red Shoes attempts to physically restrain Evil. He is once again shoved away. Okada falls to the floor in a heap when Evil does his solo Conchairto deal. Okada is in rough shape, laying on the floor and barely moving. The crowd cheers Okada on to get back into the ring and beat Red Shoes’ count.

Okada gains a breather for himself with a DDT. Okada sits Evil on the top rope drop kicking him to the floor. 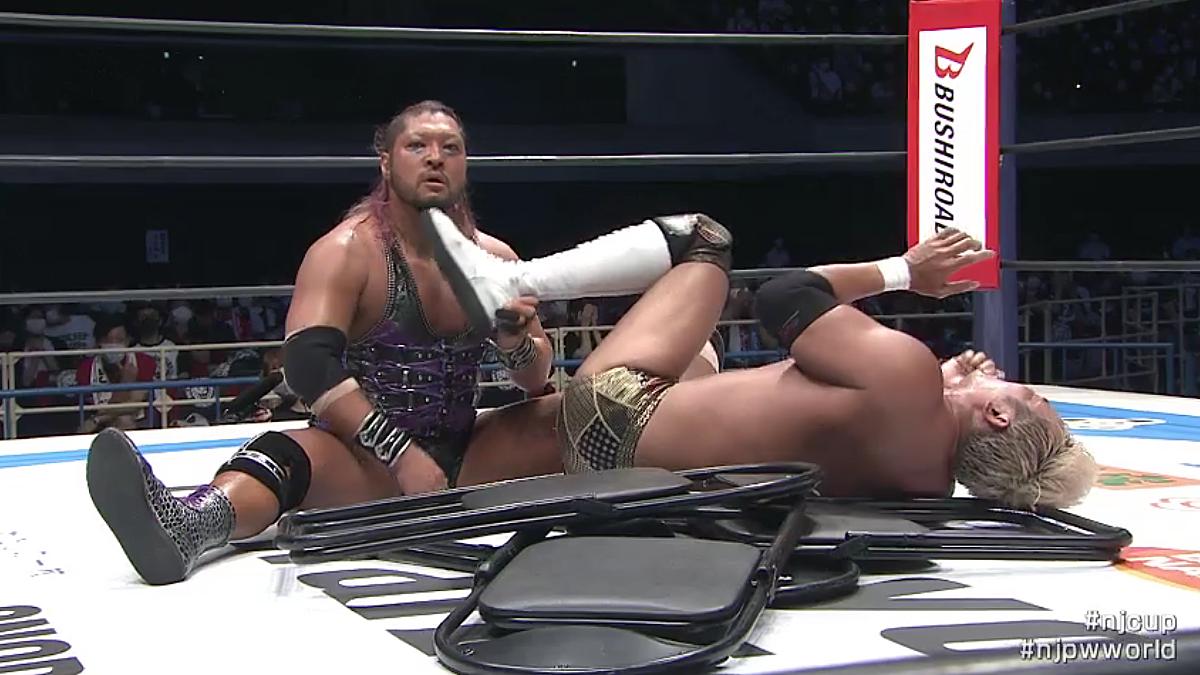 Evil introduces Okada to a pile of chairs. Courtesy: NJPW.

Okada lands his Tombstone piledriver and follows that up with his Cobra Clutch submission. Evil claws his way to the ropes. Evil pitches Okada into Red Shoes. Red Shoes is stunned and that allows Evil to punch Okada in the “lower abdomen”. Red Shoes rolls out of the ring to the floor.

Evil fills the ring with steel chairs. He arranges them in a pile and drives Okada into them with Darkness Falls. Evil slides all of the chairs out of the ring. Red Shoes is oblivious to it all. Evil gets a two count.

Evil breaks out of the Cobra Clutch by mule-kicking Okada in the crotch and stomping his crotch. He wins the NJPW Cup with Everything is Evil.

Evil will now challenge the leader of the Los Ingobernables de Japon faction, Tetsuya Naito, for both the IWGP Heavyweight and IWGP Intercontinental Championships tomorrow at Dominion in Osaka-Jo Hall.

The crowd didn’t seem particularly happy that Evil won with many in attendance booing his celebratory speech. 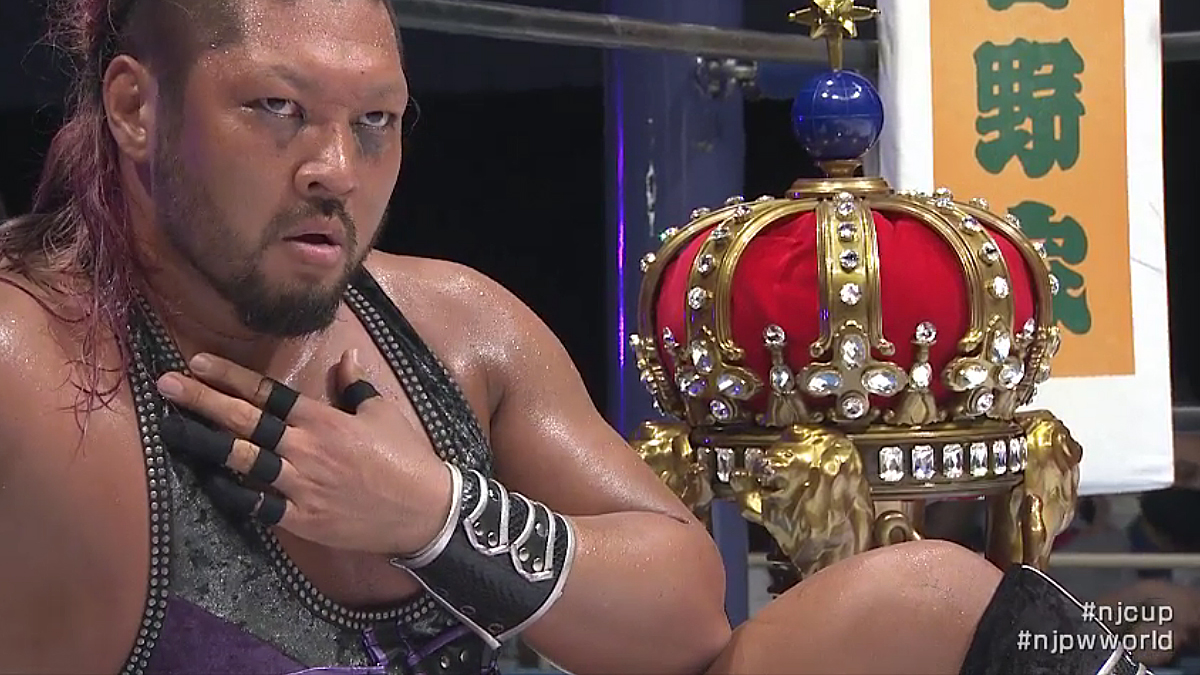 Naito came out to address Evil. He held his hand up for Evil to fist bump but instead Evil delivered Everything is Evil to Naito shocking everyone. Bullet Club came out cheering and clapping for Evil as he stomped on Naito’s Los Ingobernables de Japon hat and Naito himself. He joined the Bullet Club members in their group huddle and cheer but as Evil began laying the boot to Naito the rest of Los Ingobernables de Japon ran to the ring to protect their leader. 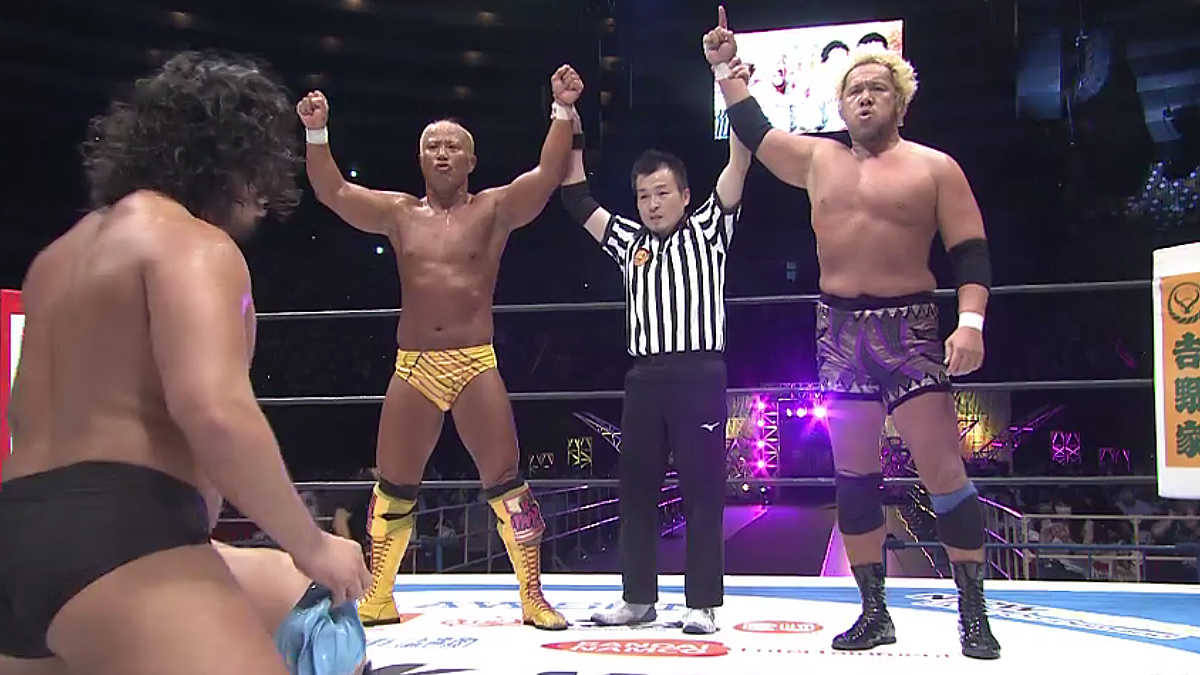 Honma and Makabe (Great Bash Heel) walk away with the win. Courtesy: NJPW.

Fans clapped energetically as the first match began and the bell rang welcoming back NJPW. Makabe taught took out some frustration on Uemura whipping him into the steel barrier. The fans behind the Young Lions in this match clapping boisterously for them. Unable to stand by while his partner is battered, Tsuji rushes into the ring to lend a helping hand. Tsuji antagonizes Makabe who isn’t about to take any crap from a Young Lion. Makabe pins Uemura with a lariat and a German Suplex.

Goto and Tenzan start the match in a battle of strength which Goto wins getting the better of Tenzan. A few head-butts allow Tenzan to tag in Kojima to face the Young Lion, Gabriel Kidd. Kojima puts Kidd away with his Lariat. 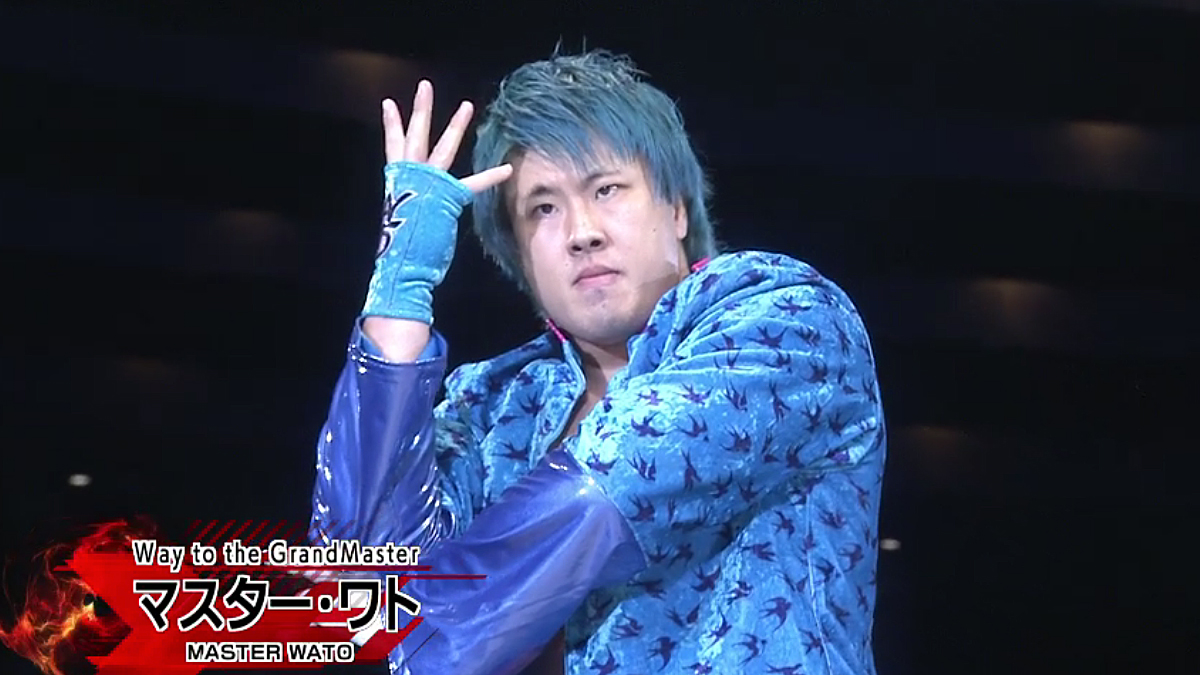 The intriguing Wato has his in-ring debut. Before the bell rings, Douki swings at Wato with his steel pipe. Wato dodges sending Douki out of the ring with a shotgun dropkick. Stiff kicks have Douki bouncing off the ropes. Douki dives on Wato taking him out on the floor. Wato is thrown into the ringside barrier. Douki pitches the official, grabs his pipe beating on Wato and choking him with it while the ref is out. The crowd cheers for Wato to make a comeback.

Back in the ring, Douki slaps Wato in the face. Wato swats him back. Wato uses his impressive martial arts skills to tip the balance back in his favour. Douki’s springboard DDT from the apron is a thing of beauty as is Wato’s spin kick. Wato pins Douki with his RPP (corkscrew senton bomb). Yoshinobu Kanemaru attacks Wato after the match but Hiroyoshi Tenzan makes the save.

Los Ingobernables de Japon take over early on working over Ishimori until Yujiro comes in, takes Sanada outside and into the ringside barrier. Yujiro pins Bushi with his Pimp Juice DDT. 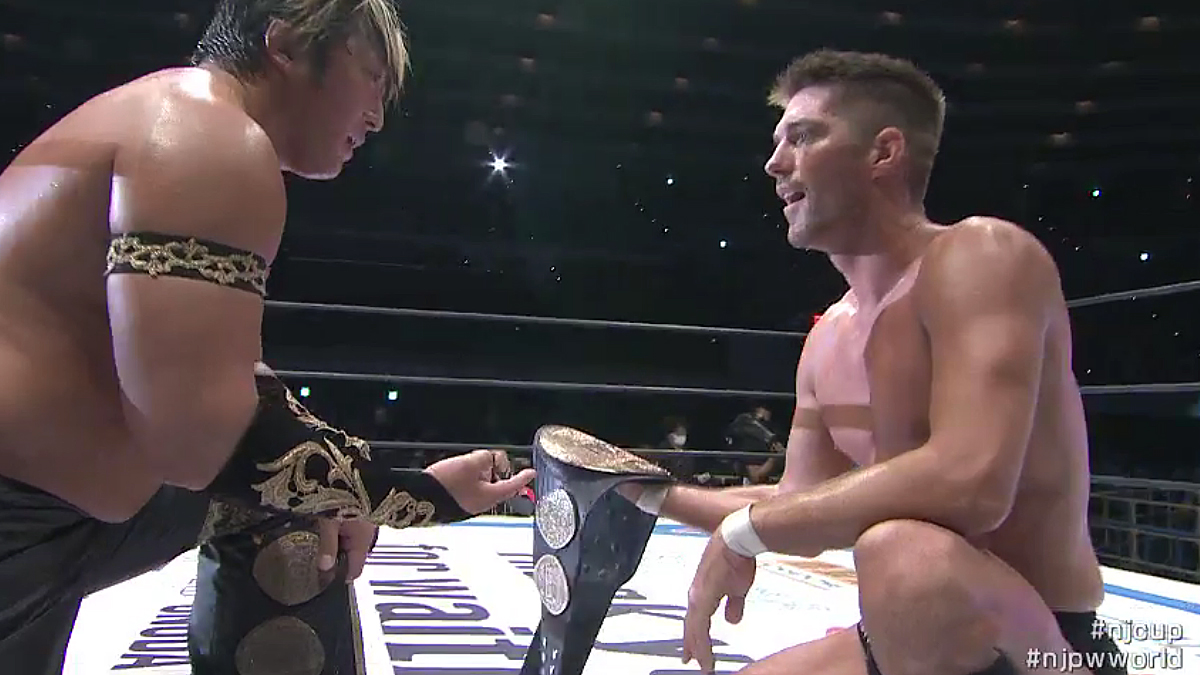 Taichi and the Most Electrifying Wrestler in the World Today have something that doesn’t belong to them. Courtesy: NJPW.

Big ovations for the face team, especially Hiroshi Tanahashi who has been the face of the company throughout the pandemic especially working with the government on their reopening plans. Strangely, Suzuki-gun all take a powder on the floor instead of initiating their usual sneak attack. The fans clap along as Tanahashi challenges Taichi to face him in the ring.

In a hilarious moment, the cameras cut away briefly to the foyer of Osaka-Jo Hall where a lone security guard in a mask is sitting in a chair.

The IWGP Tag Team Champions, Tanahashi and Ibushi, use their teamwork to their advantage until Taichi and The Most Electrifying Wrester in the World Today (Zack Sabre Jr.) paint a bull’s-eye on Tanahashi knee, which is kinda getting old at this point as an angle.

Desperado gets the three count on Taguchi with Pinche Loco.

The brawling between the two teams continues after the bell. Taichi and Zack Sabre Jr. pose with the IWGP Tag Team Championships mocking the real champions. Ibushi lunges into the ring to get the belts back. He is double-teamed by Taichi and Zack Sabre Jr. It is Tanahashi to the rescue and Taichi is slammed hard by the champs. The champs stand over Taichi with the belts raised high. 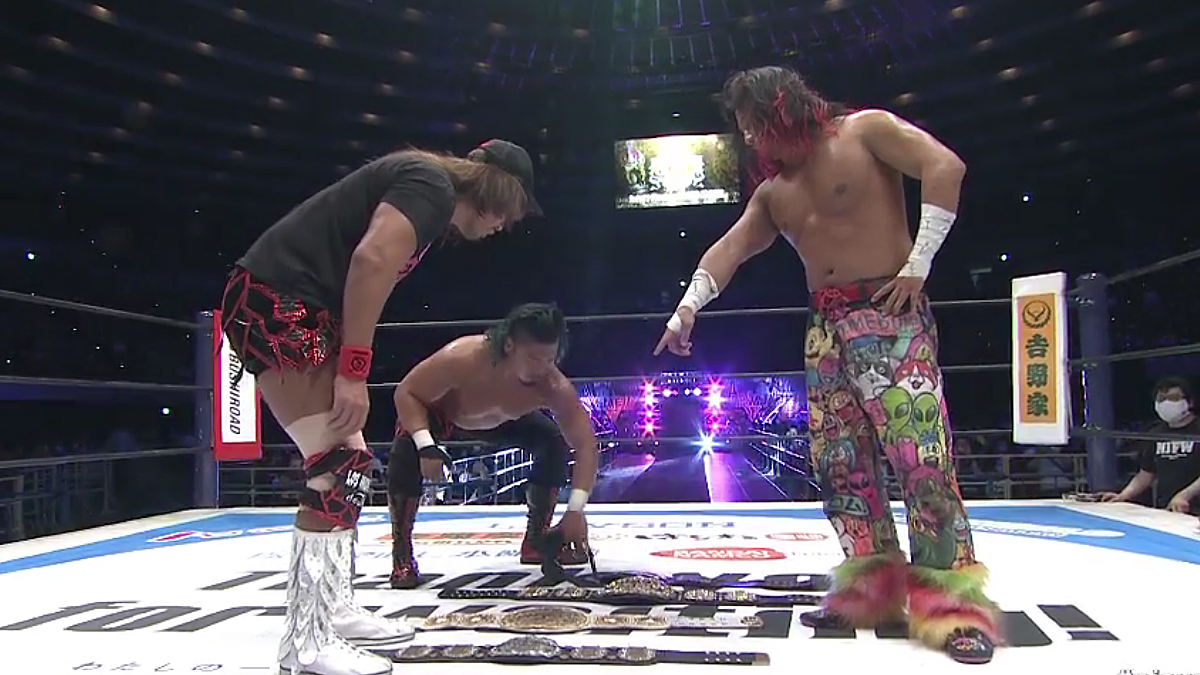 Lots of personal rivalries here with Sho and Shingo, Yano and Hiromu battling. Yano almost pins double champ Naito with a roll-up. After Takagi’s Pumping Bomber Clothesline, Naito pins Yano with a roll-up. Shingo and Sho talk trash. Shingo teases hitting Sho with the NEVER Openweight Championship. Los Ingobernables de Japon lay their championship belts on the mat and count them up, pose with them, because they can.

Kazuchika Okada versus Evil – Finals of the New Japan Cup 2020

A tremendous end to this year’s tournament which NJPW carried off well despite the limitations caused by the pandemic. I would rather there had been more singles matches though on the card but the bookers probably want to make sure everyone is healthy for tomorrow night’s big show.