Smackdown: New Day made to pay 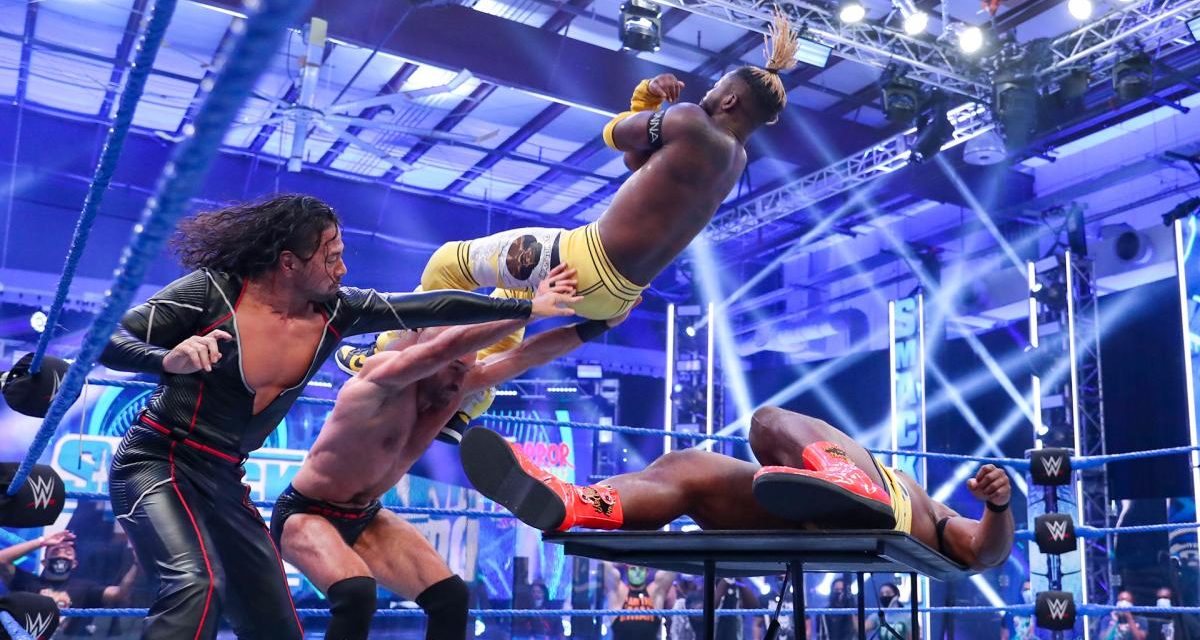 Featuring a match for the Smackdown Tag Team Championships, and also a karaoke contest (?), this July 10th edition of Smackdown is kind of like a metronome, where the left side is serious content and the right side is pointless drivel, and it goes back, and forth, and back, and forth…

We kick off this episode with Miz TV, featuring special guest Jeff Hardy, who apparently gets made fun of by everyone now. Miz and Morrison are amusing as always, as they show a “clip” showcasing Jeff’s rivalry with Sheamus so far.

This rivalry has evolved to showing Jeff’s mugshots, which I’m not sure that I like. The whole urine bit made this feud seem sort of a silly one, but the emotion in Jeff’s promo is real. Miz and Morrison suggest that Hardy fight Sheamus in a bar fight, and Hardy accepts, and then challenges either Miz or Morrison to a match because of, you know, the addiction jokes.

Hardy starts out strong hitting a big hip toss, but Miz takes control by slamming Hardy on the apron. Miz attacks with a series of kicks and a knee while Corey Graves takes his turn making fun of Hardy.

Hardy reverses a knee by The Miz into a rollup for a two count. Miz goes a little out of his element and tries for a springboard axe handle, but Hardy makes him pay with a kick into a Twist of Fury. Hardy climbs up to deliver the Swanton Bomb, but Morrison pulls The Miz out of the ring to save him. Hardy answers by taking both of them out with a crossbody as we go to commercial.

When we come back, Hardy is in control, slamming The Miz into multiple turnbuckles. Morrison interferes, pulling Hardy to ringside, and The Miz capitalizes with a big wrecking ball dropkick, sending Hardy crashing into the announce table. The Miz sends Hardy into the plexiglas, and hits a big knee and a decapitator. The Miz hits Hardy with some kicks and knees in the corner. He tries again for a springboard axe handle, but Hardy catches him again.

Hardy goes for a second Twist of Fury but The Miz reverses it into a DDT for a 2 count. The Miz beats down Hardy with some It Kicks, retrofitted to the tune of “Hey Hey Hey, Ho Ho,” and gets another 2 count. Hardy finally gets some offense with a sit-out jawbreaker. Hardy gets fired up, hitting his reverse atomic drop-leg drop combo, as well as a kick and a splash for a 2 count. Hardy goes for a Twist of Fury, which The Miz reverses into a Skull Crushing Finale, but Hardy slips out of it into a pin for 2.

He hits The Miz with a pendulum dropkick, and shoves Morrison off the apron. As Hardy sets up for the Swanton Bomb, Sheamus appears on the screen, taunting Hardy with a big glass of beer. The Miz attempts to take advantage, rolling up Hardy from behind, but Hardy reverses it into his own pin for the win. Hardy makes sure to give Sheamus a dirty look on his way to the back.

Backstage, Shinsuke Nakamura and Cesaro promise to win the tag championships, and they get upset when it is suggested that them winning would be an “upset,” and I fully agree. It would just be a completely acceptable match if a team made of a former Undisputed British and ROH World Tag Team Champion and a former IWJP Tag Team Champion were to win tonight.

Sasha Banks and Bayley make their entrances, but they’re ambushed by Nikki Cross. Alexa Bliss comes out as well, and we go to commercial with the four brawling on the ramp. When we come back, the four are having a more structured competition.

Sasha and Cross start out, but Sasha quickly tags Bayley in for a double kick. They keep the quick tags coming, keeping Cross trapped in their corner. Cross fights back, trapping Bayley in the apron cover and beating her down for a 2 count. Cross tags in Bliss for their own double team, getting a 2 count. Quick tags come in for both teams, and Cross and Bliss take out both of the Golden Role Models with a crossbody and a wrecking ball dropkick as we go to commercial.

When we come back, the situation is a little different, with Bayley beating down Bliss with a stunner on the ropes. Bliss rolls up Bayley for 2 and tries to get to Cross, but Bayley tags in Sasha to beat Bliss down before she can get there. Cross tries to fire Bliss up, but I guess it doesn’t work as well without a crowd, as the tag champs keep her contained with some more quick tags and double team moves.

Sasha hits Bliss with a wicked slap for a 2 count, and kicks Cross to avoid her being tagged in. Bliss fights back with a series of slaps and finally tags in Cross, who takes out both tag champs with a bulldog and an avalanche. Cross fights Sasha, who isn’t legal, unbeknownst to Cross. Bayley tries to take advantage of this with a rollup, but only gets 2. Cross hits her neckbreaker, but Sasha breaks up the pin. 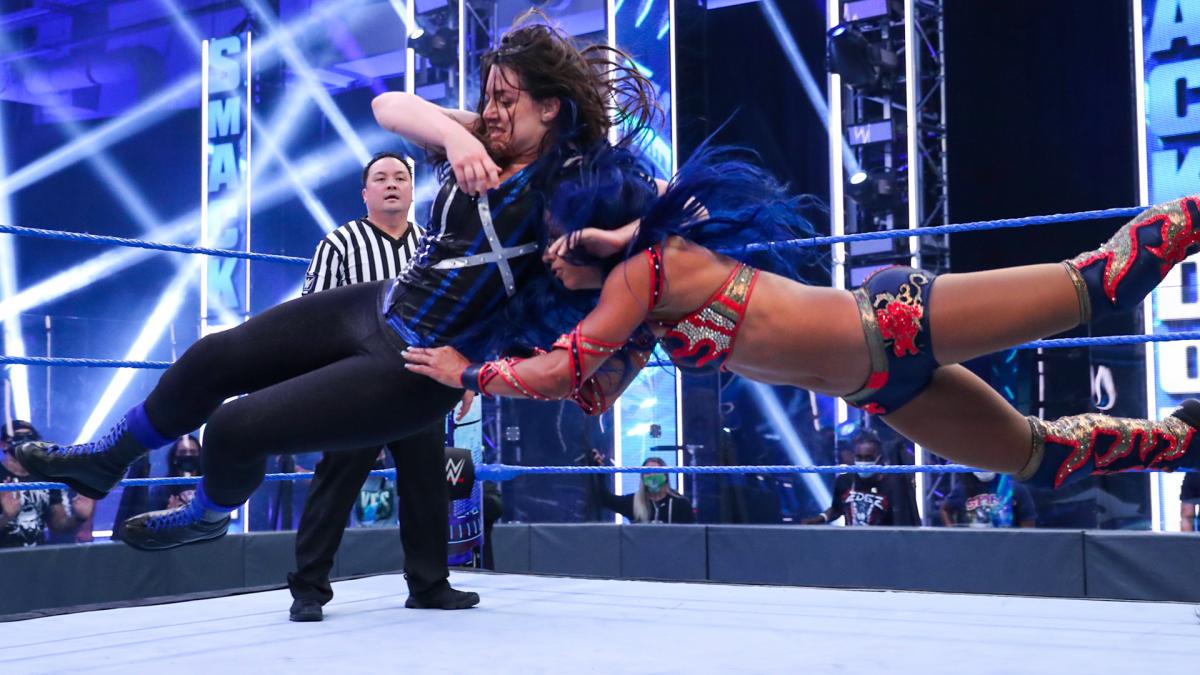 Bliss tries to take Sasha out of the equation but gets thrown into the barricade for her trouble. Cross takes out Sasha with a dropkick, but Bayley rolls up Cross and uses the ropes to get the 3-count.

To prepare everyone for the Wyatt Swamp Fight at Extreme Rules; The Horror Show, they air the Universal Championship match between Braun Strowman and Bray Wyatt from Money in the Bank. Showing old PPV matches on their regular shows is sort of bothersome, but I get it. They’ve got personnel restrictions and they’ve got time to fill.

And I don’t know if the Fiend will return, but it must be noted that “normal” Bray Wyatt is almost equal in creepiness to the Fiend, which was my favorite part about the gimmick.

You can read Slam Wrestling’s review of Money in the Bank here.

Backstage, New Day gets their turn to cut a promo, and it’s so aggressively hyped up and loud that Big E is sweating profusely by the end. Granted, he was also sweating profusely before, but still. I didn’t care too much about this match when the show started, but all four competitors have got me rather excited with their strong promos.

And now it’s time for the karaoke. Jey Uso is the judge, which will either go really well or really poorly for Naomi. The contestants are Lacey Evans, Dana Brooke, Tamina, and Naomi. They’re supposed to be singing their favorite WWE theme songs, but weirdly enough, the “karaoke” songs … they still have words. They’re just singing over the theme songs with the words still in them. 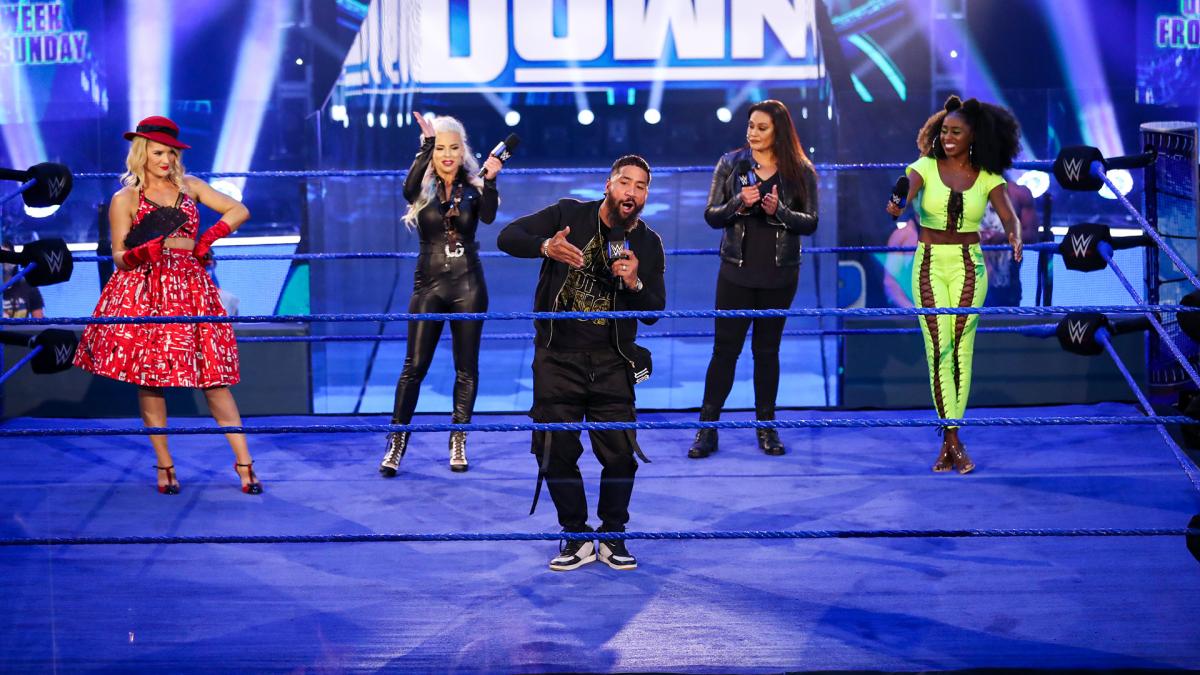 WWE brings you: a segment that shouldn’t have happened! Photo: WWE

Lacey Evans and Naomi are the only ones who get a fair turn, as Jey shuts Dana and Tamina down pretty much instantly. The results are determined by round of applause, which with a planted crowd, is a great way to make this scripted. Naomi gets the most applause, which enrages Evans, who shoves her. They end up throwing their heels at each other.

In the words of Obi-Wan Kenobi: “R2, we need to be going up, not down!” This segment resembles the silly,  moderately sexualized Divas segments that WWE has worked so hard to get away from.

Naomi fights back with three solid kicks to the head, forcing Evans to ringside. Evans pushes both Dana and Tamina around in frustration, and the two fight back, causing Naomi to be disqualified. Nobody is keeping track at the moment, as all four women erupt into a violent brawl. Lacey Evans runs out of the ring and receives a chorus of boos.

Backstage, AJ Styles cuts a promo, talking about how nobody is worthy, but gets a little scared when he gets the news that he’ll be facing Matt Riddle next week for the Intercontinental Championship, which will no doubt be a great match.

Shinsuke and Cesaro enter with separate themes, which basically means I won’t be accepting them as a real tag team. Honestly, you don’t need a new theme, just pick either one of theirs. And they need a name.

Nakamura starts strong, beating down Kofi with quick tags to Cesaro and double team action. Nakamura hits his double knees for a 2 count. Cesaro gets tagged in and gets a 2 count from a gutwrench suplex. Kofi fights back, tagging in Big E to deliver the Unicorn Stomp, which I didn’t realize how much I missed. Kofi launches to the outside to take out Cesaro, but instead gets his brains addled by a devastating uppercut as we go to commercial. 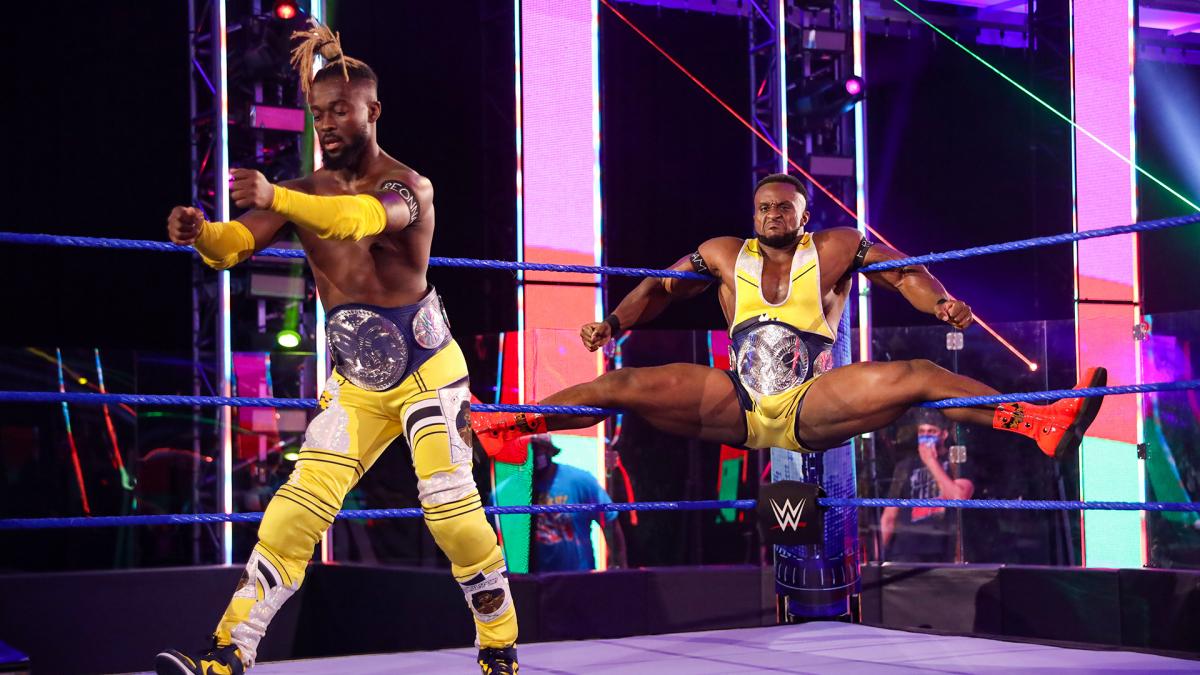 Some complex pre-match meditation from the New Day that I don’t have enough IQ to understand. Photo: WWE

When we come back, Nakamura is in control with a sleeper hold. He tries for a reverse exploder suplex, but Kofi counters into the S.O.S. Both Nakamura and Kofi make tags, and Big E comes in to toss Cesaro with some massive overhead belly-to-belly suplexes. Big E goes for his big splash, but Cesaro moves out of the way. Nakamura provides a distraction for Cesaro to roll up Big E for a 2 count. He then delivers some solid strikes in the corner.

Kofi tags himself in and hits Cesaro with an enziguri, and the tag champs deliver a devastating powerbomb-mushroom stomp combo, but Nakamura breaks up the pin. Nakamura interferes and Cesaro delivers a massive clothesline. Nakamura hits his reverse exploder suplex, but then it’s Big E’s turn to break up a pin.

The challengers beat down Big E and throw him out to the floor. Kofi fights back against both opponents, and Big E joins the brawl as well, causing the referee to end the match. The brawl continues despite this, and Cesaro pulls out a table.

They throw Big E into the steel steps, and Kofi fights back for a bit before being taken out as well. Cesaro sets up the table in the centre of the ring and puts Big E on it. In what I think is a pretty crazy spot, Cesaro powerbombs Kofi onto Big E through the table. The show ends with Cesaro and Nakamura standing tall over the New Day, holding the titles. A solid way to compromise neither team’s integrity and push their rivalry further.

Some solid action that was ruined a little by watching people I’d much rather see wrestling singing in a rigged karaoke contest that didn’t even have karaoke.