Figuring out ‘convention exclusives’ and the early dolls

San Diego Comic Con is cancelled this year and will be replaced by an event called Comic-Con-At-Home. Although the name implies otherwise, comic books do not even cover close to the majority of what can be found at SDCC as they once did when it came to be in the 1970s. The event now boasts a 460,000 square foot Exhibit Hall and hundreds of programs featuring comics and all aspects of the popular arts. These include: hands-on workshops, conferences, screenings, games, the Will Eisner Comic Industry Awards (the “Oscars” of the comics industry) a masquerade costume competition, an autograph area, an art show, and portfolio reviews from major industry artists for aspiring artists. The WWE has a presence in every aspect of the convention.

One incentive for attending the convention for collectors are “convention exclusives.” These items include things like action figures and comic books which are only available at the event and relate to sub-genre niches that usually are underserved. In the past Mattel has provided WWE convention exclusive action figures of The Shockmaster and a “Macho Man” Randy Savage right out of a Slim Jim advertisement.

This year’s selection is an Elite Mr. T, who 35 years ago bounced from The A-Team to the tag team to join the WWF as Hulk Hogan’s main event partner for WrestleMania I. The figure had a very limited online release and sold out within hours. Mr. T is no stranger to action figures. His past plastic incarnations include appearances as B.A, Baracus by Galoob, Clubber Lang from Rocky III by Remco and more. But this will be his first time being released as part of a WWE line. 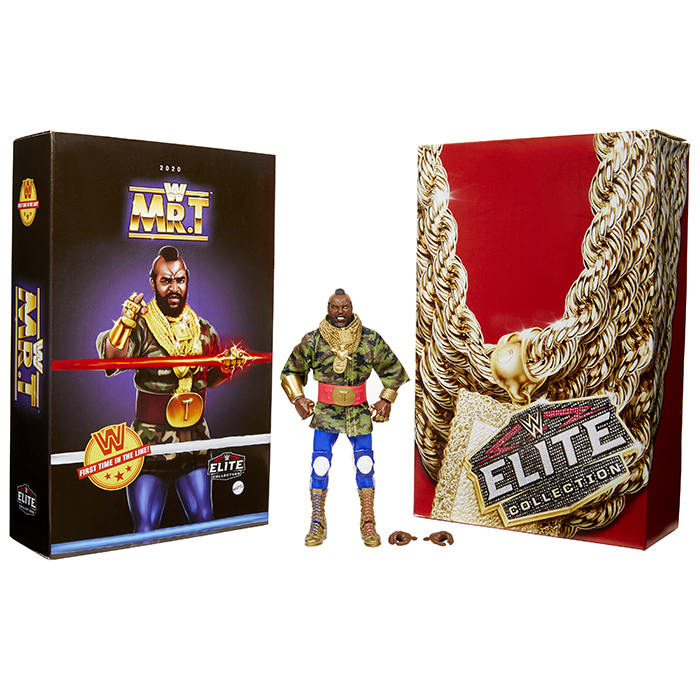 The notion of creating wrestling “Superstars” was another marketing success by Vince McMahon. WWF talent would go beyond the realm of “wrestler” by rubbing elbows with MTV and Hollywood’s biggest celebrities. This marketing machine that Vince McMahon started at WrestleMania I produced action figures at a rate only perhaps rivaled by Star Wars, but the WWF was not the first to produce officially licensed toys based on pro wrestlers. One wrestler in particular would be at the cutting edge for this and more in the world of marketing more than 30 years before McMahon would.

Gorgeous George in the 1950s carried with him an unprecedented level of pomp and circumstance for a wrestler. Although some say his entrance shtick was a plagiarization of Lord Patrick Landsowne’s (who wrestled in the 1930s) it did not end there for George. Everything George did, he did with the pomp of a Hollywood star. He rubbed elbows with celebrities of the day at the most exclusive clubs, issued press releases to the media and inspired others like Muhammad Ali and James Brown, who credit George for inspiring their theatrics. George was also lampooned in Merrie Melodies cartoons and bootlegged by Rittgers in a set of chalkware figurines. He himself would also be the inspiration and licensee for the first ever wrestling “doll.” Not quite an action figure, the puppet prototypes appeared in a wrestling magazine article that boasted they would be available for sale soon. It wouldn’t happen. Only a couple are known to still exist today. 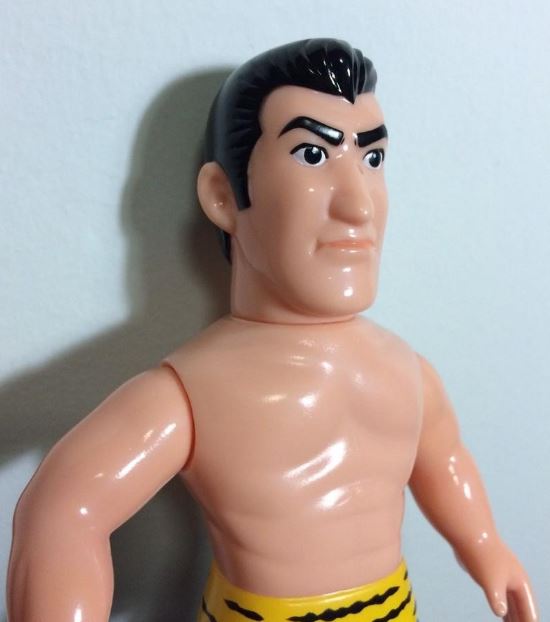 Japan however would be at the forefront of this toy genre nearly 20 years later. In 1969 JWA (Japan Pro Wrestling Alliance) figures were released by Bullmark. The series included the biggest Puroresu stars such as Antonio Inoki and Giant Baba. These “sofubi” (soft vinyl) figures were in the style that Bullmark was famous for and they also had such figures for Godzilla and Ultraman. Designer Toy company Medicom still releases figures in this style today under many different licences including Puroresu legends, WWE and more. Nakajima Production would also release a line of sofubi based on the Puroresu oriented TV show/Manga Tiger Mask. It featured a number of figures of actual puroresu stars who appeared in the series. The first action figure incarnation of a wrestler would too be based on an appearance outside of the squared circle.

Harold Sakata was a Japanese-American Olympic medalist weight-lifter, professional wrestler and actor. In the ring he was Tosh Togo and his most famous role on the screen was as the memorable villain Oddjob in the 1964 James Bond film Goldfinger. The 1964 Oddjob toy by Gilbert thus marks the first action figure of a professional wrestler. 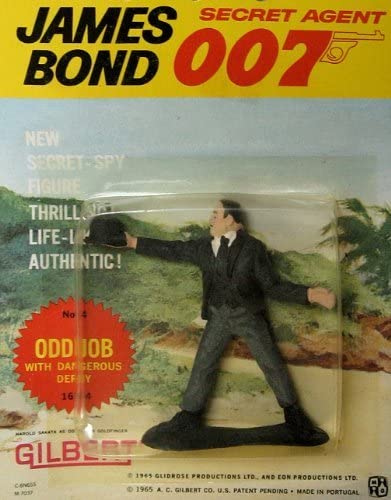 Action figures remain to this very day as a milestone of success for pro wrestling “Superstars.” The Babe Ruth of the WWE, Hulk Hogan, skyrocketed to the mainstream with his appearance as Thunderlips in Rocky III — and we’re back to Mr. T — and an action figure by Remco marked the occasion.

Today Dwayne “The Rock” Johnson is arguably the most famous celebrity in the world and he has the action figures to prove it.