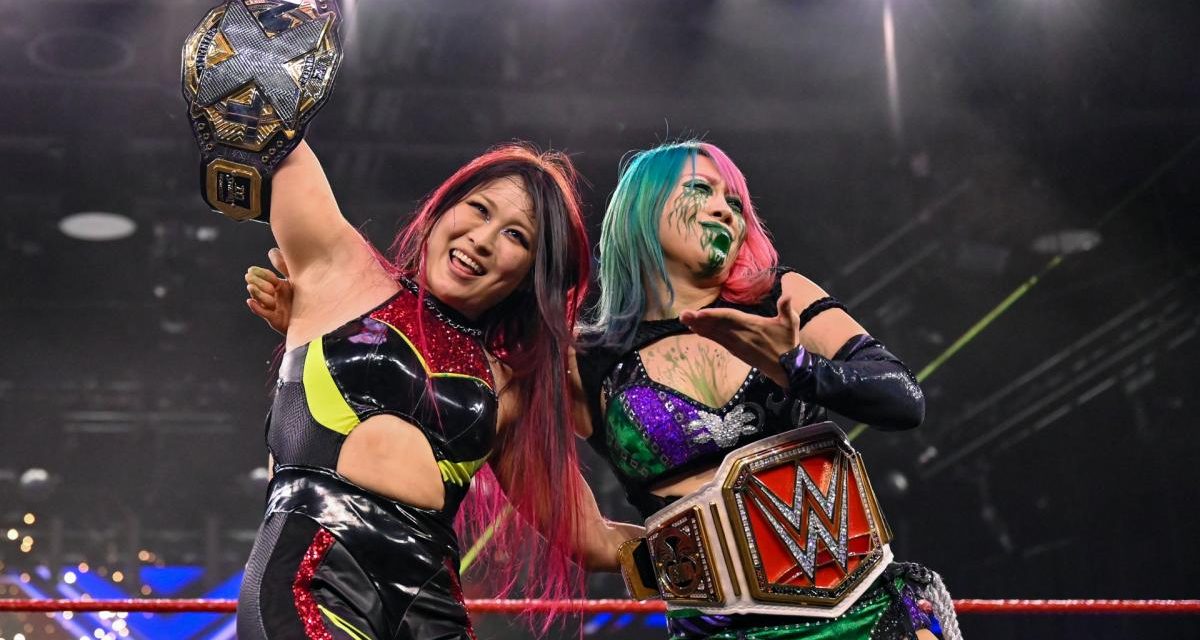 This week on NXT, night one of The Great American Bash features NXT Women’s Champion Io Shirai taking on one half of the WWE Women’s Tag Team Champions Sasha Banks in the main event!

We are on tape from Full Sail Live in Orlando, Fla. Mauro Ranallo, Beth Phoenix, and Tom Phillips have the call for this week.

Yim walks LeRae out of the ring and Nox and Yim walk Kai out as well. Yim and Nox feel each other out to start. LeRae drags Yim out and throws her into the steps. Kai distracts Nox and LeRae rolls her up for a nearfall. Kai takes out Nox and LeRae. Kai and Nox take each other out ringside. Yim and LeRae fight inside, but LeRae with a bulldog onto the apron on Kai. Diving plancha from LeRae takes out Nox. German suplex off the turnbuckles by LeRae gets a nearfall on Yim. Corner boots exchanged and Yim and Nox team up. Protect Ya Neck lands for Yim on LeRae.

Candice LeRae has been eliminated by Mia Yim via pinfall.

We return from the break with Yim and Nox landing corner cannonballs on Kai. A double cover sees Kai still able to kick out. Nox and Yim exchange. Yim with a jab and Nox falls to the outside. Nox gets back inside as Yim dives at her, so Kai attacks with a big boot. Yim lands a Dragon Suplex on Kai. Yim attacks Nox and Kai in the corners and lands flying headscissors on both. Suicide dives from Yim on both outside. Code Blue on Kai inside gets a nearfall. Nox with a crucifix nearfall on Yim. Yim with Sole Food on Nox, but she rolls out. Kai with an O’Connor Roll on Yim.

Mia Yim has been eliminated by Dakota Kai via pinfall.

Kai and Nox exchange forearms and open-handed strikes as we return from break. They both get to their feet slowly and Kai lands a superkick to put her back down. Nox with a headbutt and chops to start her comeback. Corner cannonball gets a nearfall on Kai. Bridging fallaway slam on Kai gets another. Kai with a big boot on Nox up top. Military press is followed by the Kai-Ropractor for a nearfall. Kai stomps Nox down and gets her up on the shoulders. Nox counters for an inverted Falcon Arrow that gets a nearfall. Shiniest Wizard misses and Kai with a crucifix into a Koji Clutch variation. Nox rolls and stacks for a nearfall. Nox with another headbutt and the Molly-Go-Round lands off the top. Shiniest Wizard follows.

A great start to the show with a fast-paced elimination match that built to the rivalry final two. Nox and Kai delivered on the intensity in that slot and capped off the match perfectly.

Damian Priest with McKenzie Mitchell and he says he needs to direct this to one person. Priest asks what kind of man Cameron Grimes is. Priest says Grimes has his full attention and Grimes will regret it. Priest challenges him to a one-on-one match and he says the beat will live forever.

Thatcher and Lorcan exchange submissions and chops in close quarters. Flying headscissors and armbar from Lorcan turned into a bow-and-arrow from Thatcher. Lorcan goes back for the arm and Thatcher rolls back and stacks for a nearfall. Thatcher struggles, but spins to an STF. Judo throw and Thatcher looking for the armbar now. Thatcher controls the arm and flips Lorcan down into a double wristlock attempt. Lorcan works out of a headlock and snapmares to a surfboard. Thatcher fights up, but Lorcan with chops and a back elbow out of the corner. Thatcher hits a running uppercut to knock Lorcan from the top to the floor as we break.

As we return, Lorcan fights out of a submission, but Thatcher with a belly-to-belly suplex that sends Lorcan rolling outside. Lorcan comes back with a half-and-half suplex inside and a European uppercut gets Lorcan a nearfall. Lorcan chops back into it and exchanges uppercuts with Thatcher. Chops to the face exchanges and Lorcan drops Thatcher with one for a single-leg Boston Crab. Thatcher fights up and counters with a double-underhook suplex for a nearfall. Thatcher looks for a submission and Lorcan fishhooks the mouth. Thatcher spins out to the Fujiwara Armbar.

Winner by submission: Timothy Thatcher, 3.5 out of 5 stars

As hard-hitting a match on the feet and as technical on the mat as you will get in the WWE.

Stone comes out in boxing trunks, goggles, and with a mouthpiece. Stone holds Aliyah back and wants Ripley first. Stone shuffles around the ring and does a Bas Rutten jump before Ripley uppercuts him out of the ring. Aliyah jumps on her back and is able to land a hurricanrana. Stone holds Ripley’s foot and Aliyah with a corner knee for a nearfall. Headscissors choke, but Ripley lifts out into a powerbomb attempt. Ripley with an electric chair drop for a nearfall that sees Stone drag her off the cover. Stone leads Ripley on a chase, but falls to the floor as Ripley sidesteps him on a slingshot crossbody attempt. Aliyah with a bulldog to the floor that takes Ripley out as we break.

Double suplex on Ripley as we return and Aliyah shoves Stone off the double cover. Stone says they are on the same page and they try another suplex, but Ripley suplexes them both. Ripley starts her comeback and throws Aliyah into the midsection of Stone. Ripley throws Aliyah into a facebuster below the belt on Stone. Big boot on Aliyah lands. Stone tries to roll Ripley up, but she headbutts him. Double Trailer Hitch in for Ripley.

Winner by submission: Rhea Ripley, 2 out of 5 stars

Fine, but standard sort of comedy match. Robert Stone was still able to carry the comedy and sell well for Ripley at least.

Strong paces around and tells Lumis to back up as he decides whether or not to put the strap on. Strong pulls Lumis into a punch and says he told us that he was not afraid of Lumis. Lumis drops Strong with a punch and puts the strap on the hand of Strong to make it official.

Strong tries to land a knee, but Lumis with an uppercut. Strong sent outside and Lumis pulls Strong into the barricade over and over. Strong comes back with a knee to the body. Lumis escapes a whip with the strap and takes it back inside. Lumis works Strong down. Strong gets to the apron, but Lumis with a hip toss back inside. Strong kicks out of the corner and Strong with a knee. Lumps lands a uppercut that sends Strong outside.  Lumis pulls Strong into the steel steps. Lumis carries Strong up to the stage and they fight there. Lumis pops open a trunk of one the car stage props, but Strong avoids it. Olympic Slam on the floor by Strong. Strong whips Lumis with the strap and punches him down. Strong works Lumis down. Lumis works Strong into the corner, but Strong kicks out. Strong runs into a Lumis clothesline and Lumis rallies. Hot shot suplex connects and Lumis whips Strong with the strap. Arm triangle fought off by Strong for a flying knee. Lumis put up top and Strong with a superplex for a nearfall.

Strong hogties Lumis into a Strong Hold. Lumis moves to the outside and Bobby Fish runs out and trips him up on the apron. Big boot from Strong gets a nearfall. Fish runs in and gets clotheslined into the strap. Lumis with a Side Effect into the Arm Triangle with the strap.

Winner by submission: Dexter Lumis, 2.25 out of 5 stars

The strap didn’t end up really add much to the match in comparison to their stuff over the last few weeks. This didn’t really feel like the payoff to the rivalry.

McKenzie Mitchell with Candice LeRae and Johnny Gargano. LeRae says the four-way match was them ganging up on her. LeRae starts a fight with Mia Yim backstage and Gargano gets in Isaiah “Swerve” Scott’s face for trying to break it up. Officials separate all four and Scott says he will take care of Gargano later.

Drake Maverick’s music hits and he comes out in a neck brace. Maverick takes it off and storms the ring. Maverick fights off Escobar’s Joaquin Wilde and Raul Mendoza, but they get the numbers. Escobar says he told the little guy that no one can touch him and looks to take Maverick out. Breezango make the save and clear the ring. Breezango challenges El Legado del Fantasma.

McKenzie Mitchell with Cameron Grimes and Grimes says he doesn’t have time to focus on the past in Damian Priest because he has his foot on the gas. Grimes challenges the winner of NXT North American Champion Keith Lee and NXT Champion Adam Cole because he says he is going to the moon.

Banks backs Shirai into the corner. Shirai comes back with an arm wrench and counters Banks with a kick out of the corner. Missile dropkick sends Banks outside. Suicide dive from Shirai lands. Shirai with pendulum double knees in the corner for a nearfall. Shirai mounts Banks in the corner and Bayley honks the car horn at the stage for the distraction. Shirai dropped on the top turnbuckle and Banks goes to grounding Shirai. Surfboard stretch in on Shirai. Shirai with knees and a headscissors out of the submission, but Banks uses headscissors to drive Shirai face-first into the second turnbuckle. Shirai rocks Banks up top for a Frankensteiner. Shirai starts the comeback and lands a flapjack and a 619. Springboard dropkick nearfall for Shirai. German suplex lands for Shirai. Bank Statement counter in for Banks. Shirai struggles, but stacks Banks for a nearfall. Banks with a nearfall of her own. Victory roll into a stomp for Shirai. Double knees in the corner and Shirai goes up top. Banks crotches her into the tree of woe. Dropkick misses as Shirai sits up. Moonsault sees Shirai land on her feet. Banks kicks out of the corner and a meteora off the top gets a nearfall.

Banks dropped on the second rope. 619 blocked by Banks. Shirai fights off the apron. Shirai stopped on the top rope and hit with a head kick. Banks with a sunset flip and she powerbombs Shirai into the Plexiglas before dropping her to the floor. Frog Splash misses for Banks and Shirai locks in a crossface. Bayley throws a title into the ring and Banks grabs it. The referee has to take the title away and Bayley levels Shirai with a forearm. Banks tries to get another title to hit Shirai, but WWE Raw Women’s Champion Asuka pops up and mists Banks. Shirai with a Shotei and a moonsault after taking Bayley out ringside.

Not quite as smooth as expected from these two, but they still delivered a great main event that built really well throughout. The Asuka interference was an unexpected and nice touch for the close.

A few underwhelming matches aside, this felt like a big name NXT show with two or three really great matches that lived up to the special Great American Bash billing of the episode. The builds for night two next week look even more promising.