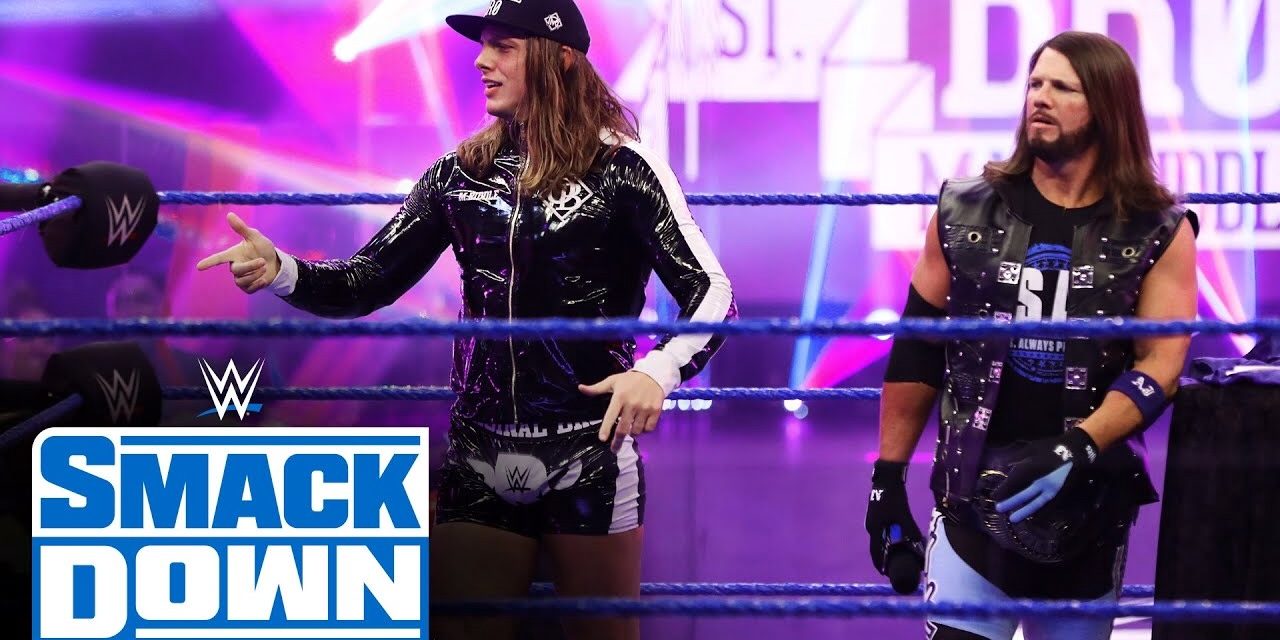 Amidst a hectic hour in professional wrestling, Smackdown supplied a mirthful program of entertainment. Headlined by the anticipated debut of Matt Riddle and return of Bray Wyatt, things are looking up for the blue brand.

Several rivalries have continued following an eventful Backlash — such as Jeff Hardy’s line-blurring feud with Sheamus and Bliss-Cross’s chase for gold against Banks and Bayley. New Intercontinental Champion AJ Styles resumes his conflict with Daniel Bryan as his championship ceremony opens the 6/19/20 edition of Smackdown.

The Smackdown roster surrounds the ring awaiting the Intercontinental Championship presentation. New champion AJ Styles enters the ring and plays it cocky, mocking the nearby wrestlers. Renee Young is about to present Styles’s title, but he demands that Daniel Bryan award him his belt. The fallen finalist is reluctant to strap the belt around Styles’ waist, but he eventually succumbs to the demand. It’s refreshing to see a face accept his loss to a boastful champion, and it’s very true to Bryan’s character.

But it isn’t enough for Styles. Bryan admits that Styles is the better man, and confesses his admiration for him. Bryan continues by naming the numerous, great championship matches Styles could have with the surrounding competitors — specifically Drew Gulak who defeated the champion weeks ago. However, Styles has had enough and threatens the next person who runs their mouth.

Enter “The Original Bro” Matt Riddle making his official debut! Waltzing to the ring with incomparable swagger, Riddle steps to the champion. Mimicking Styles’s catchphrase, Riddle declares, “I’m the bro that’s gonna run the show.” Styles comes back with a cheapshot, but Riddle strikes him out of the ring. The champion orders for a ref before the break.

In Riddle’s first Smackdown matchup, he battles with an all-time great for the Intercontinental Championship — a great sign for Riddle’s main roster future.

As announcer Greg Hamilton makes the championship introductions, Styles interrupts: “No shirt, no shoes, no championship title match for you.” Riddle doesn’t get his title shot, unfortunately. But he apparently gets a lumberjack match, seeing the roster hasn’t left ringside.

Riddle makes an aggressive start with multiple suplexes and knees. Styles attempts to fight back but is met with Riddle’s vicious strikes. The champion counters with a picture-perfect dropkick and a thrust to the throat sending Riddle to the outside. Riddle inadvertently bumps into King Corbin before commercial. This regrettably hints at Corbin’s next hot feud..

Styles has control and works down his opponent. He continually targets the left leg of Riddle, but the newcomer powers through with numerous forearms and suplexes. Riddle hits the “Bro-mission” which is countered by Styles’s “Calf Crusher”; Riddle grabs the ropes. The champion heads to the floor and shoves Daniel Bryan before the others hold him back.

Styles looks for the “Phenomenal Forearm” but is caught by Riddle’s “Bro-derrick”. Riddle keeps him down for the surprise three-count and huge upset victory! The surrounding faces storm the ring in celebration of Riddle’s extremely impressive and hopeful debut.

Jeff Hardy is seen backstage before an interview regarding his loss to Sheamus. He’s staring off into space — is he drugged or just disheartened?

Renee Young hosts this surreal interview with Hardy. He expresses how he’s continually tried to turn his life around and extinguish the constant fire. He explains his negative thoughts and admits that he’s a junkie and an alcoholic. But Hardy turns it around on Sheamus who he describes as a bully and obstacle. Hardy leaves with the thought, “I am not done yet.”

Shorty G is confidently interviewed before the match despite the mentioned disadvantage. He mocks Rawley’s relationship with Gronk before his opponent appears behind him. G has “eyes in the back of (his) head” and knocks Rawley down before the break.

Rawley overpowers the smaller opponent and ragdolls him across the ring. If G’s underdog persona proves anything, it’s that he’s an incredible seller — Rawley looks like a legit force in this bout. G counters with an impressive German to the 6’3”, 290-pound opponent. He flies off the top, gets caught, and hits a cradle for the victory. The match is short-lived but highlights both men’s strengths.

Miz TV hosts, The Miz and John Morrison, discuss their loss at Backlash. They blame the single-champion rule change and Otis for their defeat. They then invite their guest, Mandy Rose. It isn’t long before her ex-best friend Sonya Deville appears. Deville protests Rose’s unwarranted spotlight and her failed opportunities — she again proves her dark-horse abilities on the mic. She continues: “I’m going to rip you apart…until your outsides are just as hideous as what’s right inside of here.” The two begin to brawl before Miz and Morrison make a blockade. Rose slaps the Miz before exiting the ring. 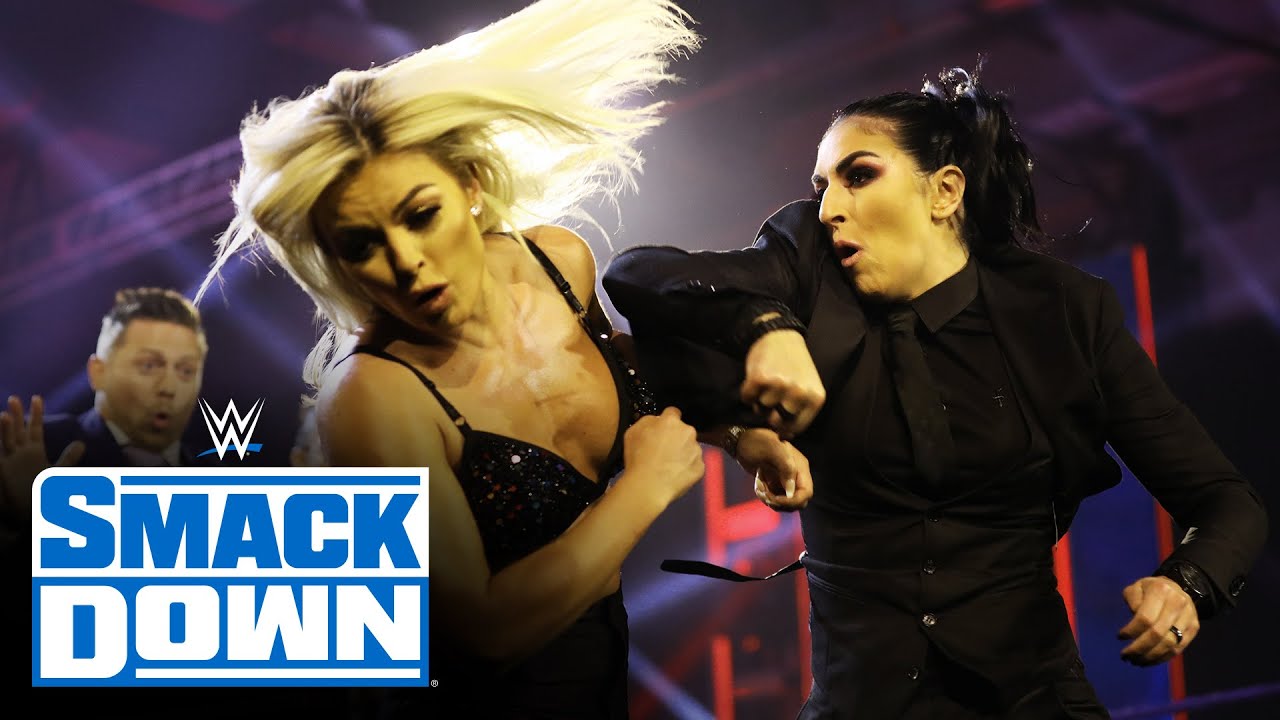 The Women’s Tag Team Champions Sasha Banks and Bayley are ringside on commentary. They claim to be the greatest tag team of all time, but Michael Cole points out The New Day in the ring. Kofi Kingston and Lince Dorado lock up and test each others’ skills. Big E and Gran Metalik tag in as Cesaro and Shinsuke Nakamura watch backstage. The luchadores perform simultaneous dives to the outside before commercial.

Big E hits his signature splash and stretch before Dorado counters with a springboard stunner. The partners tag in, and the Lucha House Party double teams Kingston. Big E pushes Metalik to the floor and sets up the “Midnight Hour” on Dorado for the win.

Nakamura and Cesaro immediately attack the victors. They debut an eye-catching Swing-Kinshasa finisher to lay out The New Day. As for the match, it would’ve been more enjoyable without Banks and Bayley’s constant screaming.

Alexa Bliss, Naomi, Lacey Evans, Tamina, and Dana Brooke argue over Banks and Bayley’s next opponent. Bliss looks for her partner Nikki Cross before the break.

Kayla Braxton asks Sheamus about Jeff Hardy’s previous words.  Sheamus proudly calls himself a bully and regrets not crushing Hardy’s voicebox. Sheamus announces a toast to Hardy for next week.

Cross shows up behind Banks and Bayley — who are still at commentary for whatever reason — and attacks the champions. Bliss shows up to separate the action. Bayley accepts Cross’s challenge for a fight and offers up Banks before commercial.

Banks is beating down Cross as Smackdown returns from commercial. Cross is able to catch her opponent between the ringskirt and delivers some blows. The champion regains control and works down Cross before getting hit by a tornado-ddt. Banks attempts the “Banks Statement” before multiple rolls-ups for the win. Not much to say about this encounter.

Bray Wyatt returns with Firefly Funhouse; Wyatt’s absence from WWE programming will hurt them no longer. He says he joined a book club, learned all the latest Tik-Tok dance moves, mastered the dark art of resurrecting the dead, picked up knitting, and infiltrated a reptilian stronghold.

Rambin’ Rabbit confesses that Wyatt was upset over his loss to Braun Strowman at Backlash.  The Funhouse is interrupted by Strowman’s entrance to the ring.

Strowman tells Wyatt that his opportunity is gone and their story is over. However, Wyatt says their story is only getting started. Flashbacks of Wyatt Family vignettes play as retro Bray Wyatt returns on-screen, Hawaiian shirt and all. Wyatt declares it’s his duty to destroy Strowman and tells him to “Follow the buzzards”. He closes with his signature line, “Run”, before blowing out the lantern of Smackdown. 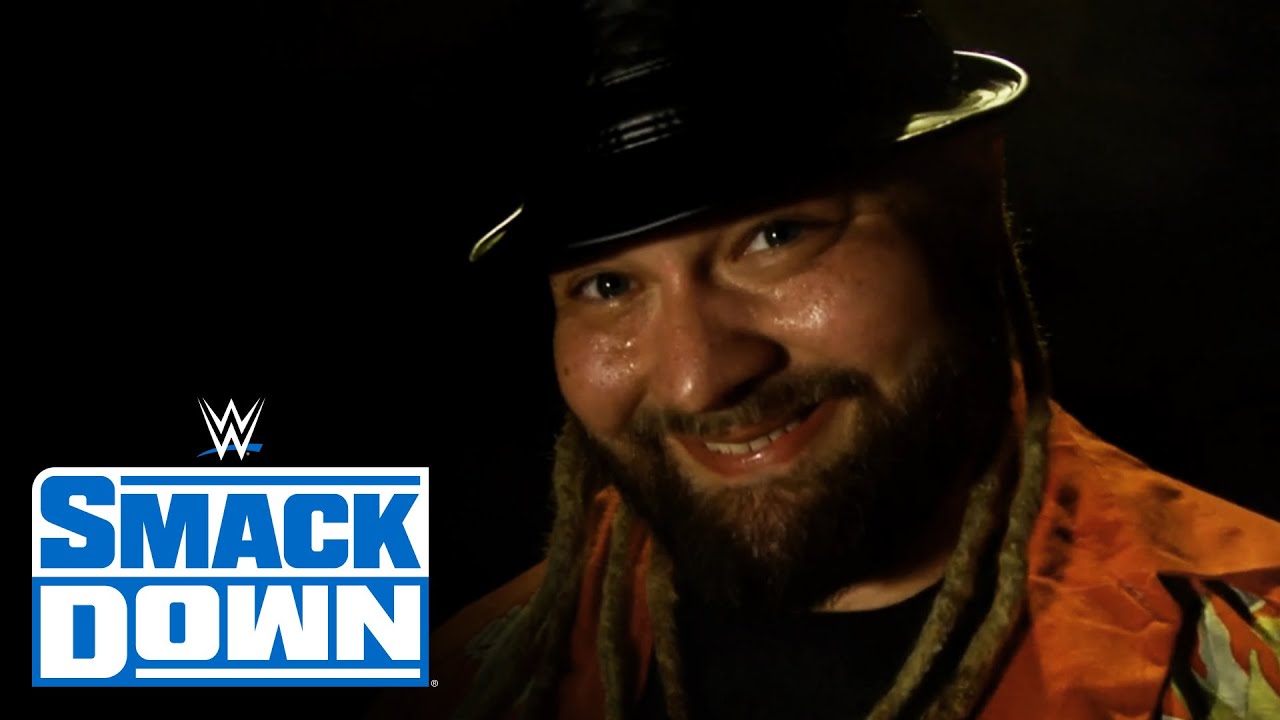 An easy-going and fast-paced episode of Smackdown with good action. This surely sets up a bright future for the blue brand.