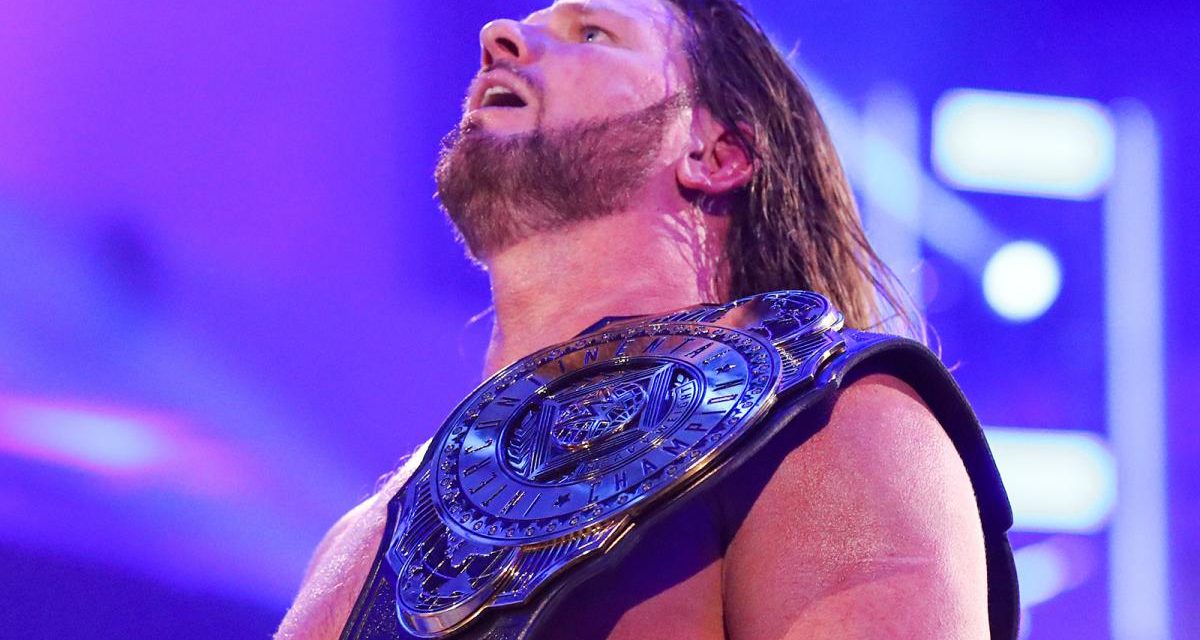 Forget about Backlash’s Greatest Wrestling Match coming up this Sunday. We saw one on Smackdown tonight.

Styles and Bryan, two of the best in-ring performers in action today, faced off in the finals of the Intercontinental Championship tournament.

The match started with wrist locks and arm locks aplenty until Bryan drop kicks Styles in the face. Bryan blocks a suplex and sidesteps Styles sending him to the floor. Bryan leaps onto Styles driving him into the ringside barrier with a great thud.

Bryan stretches Styles out working on his left arm. A drop kick stops Bryan in his tracks though. Styles lays in some shots to the head. Bryan fires back with some forearms. Now it is time for Styles to focus his attention on Bryan’s left arm and shoulder. Bryan tries to lock on a surfboard submission; however, his left arm won’t cooperate. He hasn’t the strength after the beating it took.

Bryan lines up Styles for stiff kicks in the corner. Styles and Bryan roll back and forth, back and forth almost pinning each other. Both men collide in the middle of the ring as they go for a body press.

Styles fights out of another submission catapulting Bryan right over the top rope. Styles misses a dive so Bryan chucks him into a steel post shoulder-first. Bryan stomps the shoulder on the ring apron. Styles cries out in absolute agony.

Bryan stomps on the arm again back in the ring before applying a hammer lock viciously wrenching the arm back. A Bryan comes charging in for a kick, Styles dives out of the way and Bryan crashes into a corner. Bryan hurts his left knee and leg. Styles immediately targets the leg, wrenching, smashing and crushing it. Bryan’s Insuguri and a series of kicks pauses the punishment.

Bryan follows up a Frankensteiner out of the corner with some Yes! kicks. Styles counters with kicks of his own. Styles and Bryan punch, kick, chop each other until Bryan backdrops Styles out of the ring. Styles catches Bryan’s suicide dive with a sliding kick to the noggin’. 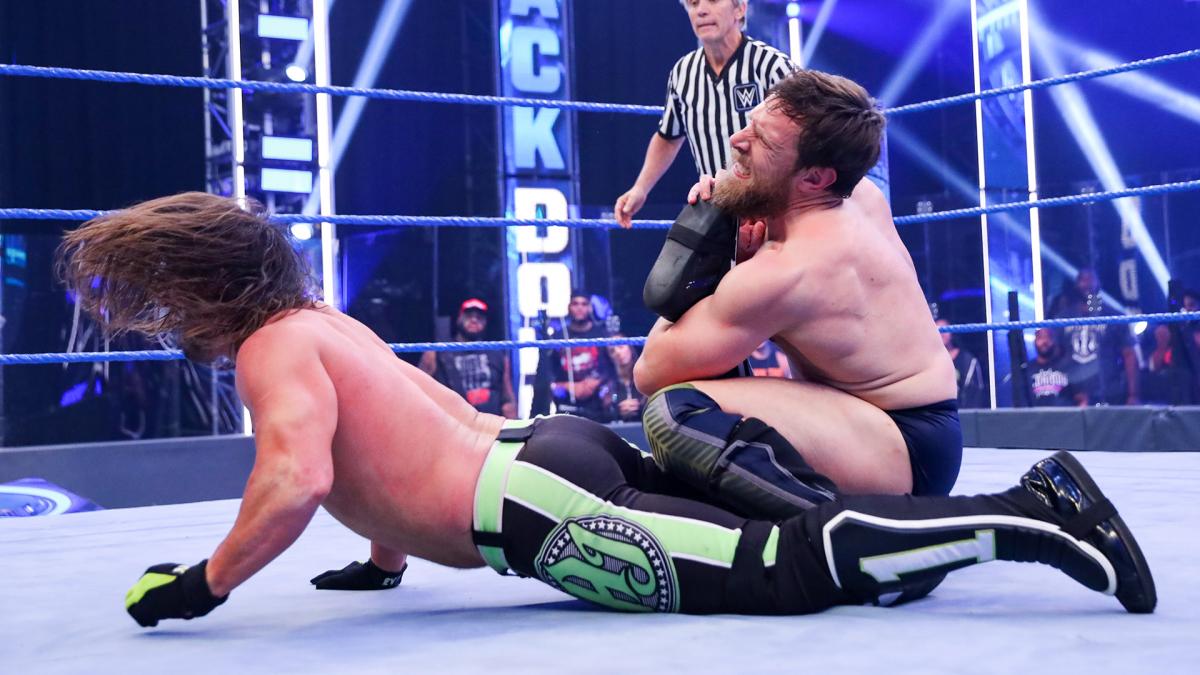 Daniel Bryan gets a leg u p on Styles. Courtesy: WWE.

Styles finds himself in the Yes Lock. He slowly makes it to the ropes to break the hold. A frustrated Bryan holds Styles’ arms stomping him in the face. Bryan goes for a running knee strike. Styles lifts Bryan into a Styles but it is a Phenomenal Forearm that finally puts Bryan away.

Following the match, Styles couldn’t help but to toot his own horn.

“I said it before and I will say it again. I am the best WWE champion the WWE universe has ever seen. I am phenomenal,” he said.

As Sheamus and Hardy get ready to sign their contract for their match at Backlash there is a medical doctor in the ring, well, at least someone wearing a stethoscope, a gown and rubber gloves.

“Before I sign this contract, I want some assurances,” said Sheamus before babbling that a leprechaun doesn’t change his spots.

“There is no way I am going to step in the ring with a junkie,” says Sheamus forcing Hardy to take a urine test.

“My name is Jeff Hardy and I’m an alcoholic. I am going to be a beacon of light for those who struggle with this,” says a defiant Hardy.

As Hardy goes behind the screen to do his business, Sheamus cuts a PSA.

“Don’t end up as a loser. Don’t do drugs like Jeff Hardy,” warns Sheamus.

Hardy completes the test and has a surprise for Sheamus. He throws the “urine” right into Sheamus’ face. 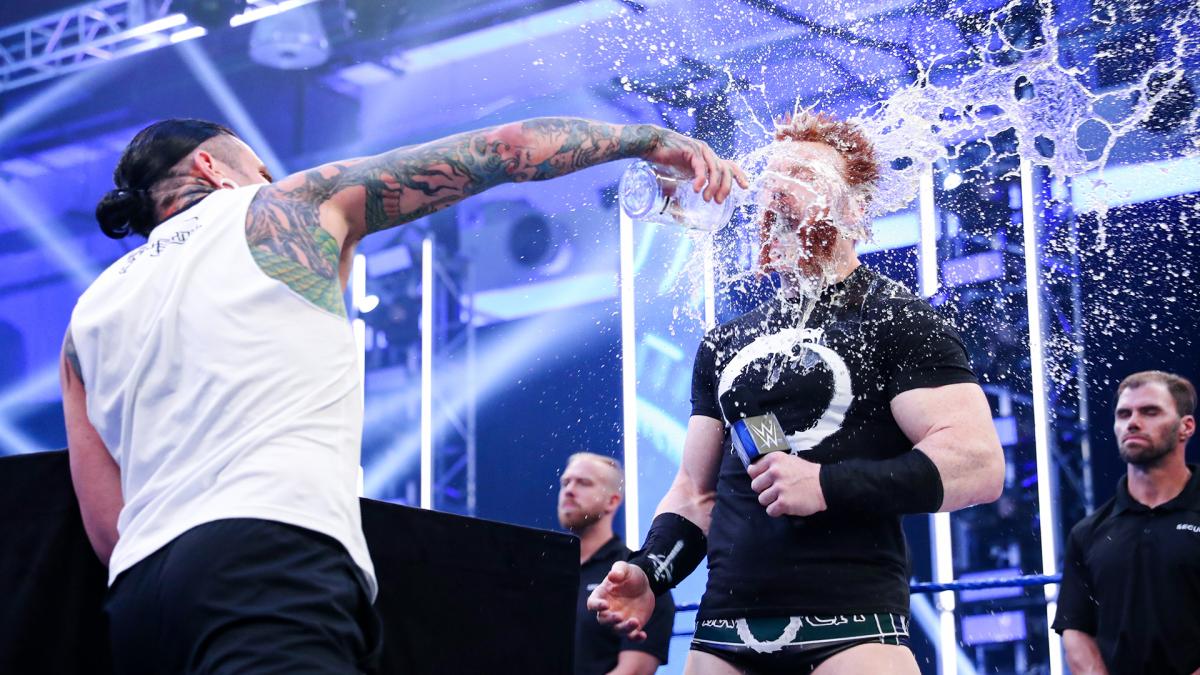 The crowd shouts…”You got pissed on!”…but the producers bleep the chant.

What in the world?

When I watch regular British and Australia television shows, the other word for feces is said all the time without being bleeped.

As Sheamus washes his mouth out in a bathroom the doctor informs him that Hardy’s test was negative. Sheamus snaps smashing everything in sight.

Kingston starts the match on fire. Cesaro catches him in a tilt-a-whirl backbreaker which stops his momentum. Nakamura tags in. Kingston knocks Nakamura out of the ring. Big E hurls Kingston onto Nakamura but Cesaro takes down Kingston on the floor. Big E takes down Cesaro in kind. Cesaro and Nakamura pull off a stunning win as Nakamura reverses Kingston’s leap off the top rope into a pinning roll-up.

Tucker has Otis blindfolded backstage, testing his sense of smell. Not sure how that will help in a wrestling match but at least dude is trying to get Otis back on track as part of the tag team. Mandy interrupts and gives Otis a kiss while handing him the Money in the Bank briefcase. Tucker reminds Otis that, well; Strowman is their tag team partner tonight. The camera cuts away to Sheamus and Hardy brawling in the backstage area.

Bayley and Sasha Banks celebrate their tag team title win with balloons and fanfare in the ring. The party is ruined by Alexa Bliss, Nikki Cross in the ring and The Iconics via the Titantron.

King Corbin appears on the Titantron. He confronts Mandy backstage about Otis stretching his crown with his “fat head” last week. Otis leaves the ring, runs backstage to attack Corbin. This leaves Strowman and Tucker alone against the heel trio. Tucker is beaten from pillar to post. Miz and Morrison double-team Strowman on the floor. Otis returns to the ring with Mandy in tow. Otis is tagged in. He goes mental destroying everyone. Otis pins Ziggler.

Styles and Bryan took up much of the airtime and for good reason. They deserved the spotlight and the match deserved the time on television not just because of the two phenomenally talented superstars involved but because of the importance of the championship. This is the way the WWE Intercontinental Championship and the match for it should always be treated. If you missed this one because you don’t normally tune in for Smackdown, go back and check this match out. You will be glad you did. It is a candidate for Match of the Year.