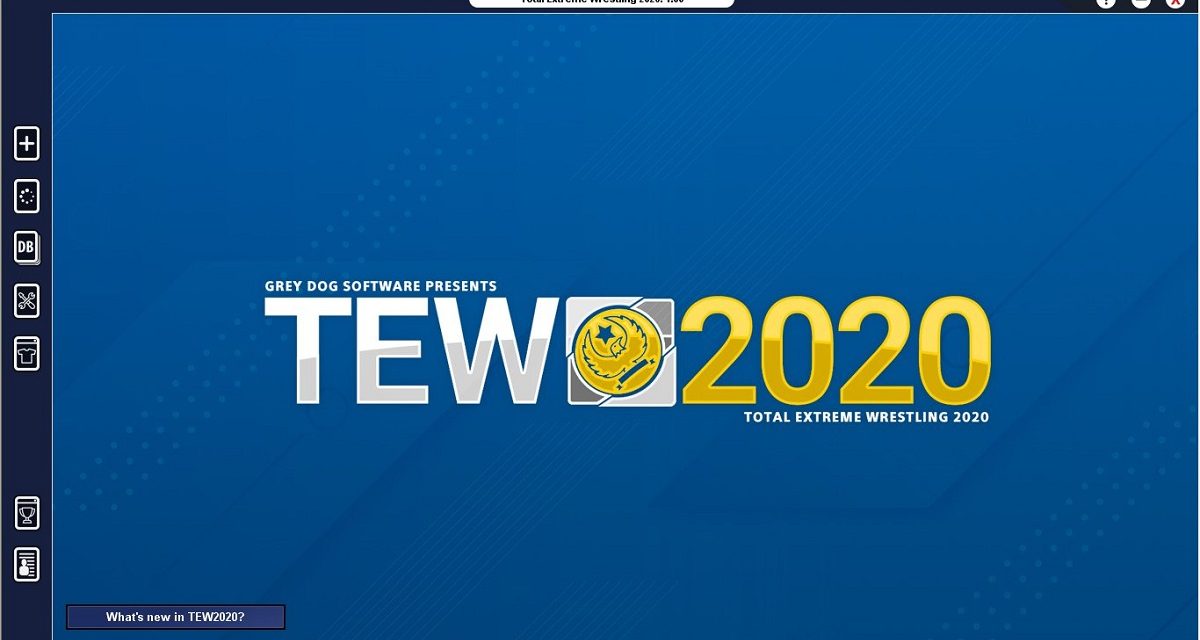 If you’ve ever curled up by the fireside with a good encyclopedia then Total Extreme Wrestling 2020 is the wrestling video game you’ve been looking for. It’s the perfect game for armchair owners and bookers but be forewarned: it will challenge you.

I’d even go so far as to say that it’s more like reading an owner’s manual but that sounds like a negative comment and I had far too much fun with Total Extreme Wrestling (TEW) 2020 to accidentally discourage anyone from trying it out.

This was my first time playing a game from the series that British programmer Adam Ryland began in 1995 with Extreme Warfare. It is a wrestling game without any actual wrestling gameplay but don’t let that turn you away because it has just about everything else.

There was once a very simple text-based wrestling game that I used to play on MS-DOS though I cannot for the life of me remember what it was called. It let you set up matches between characters unique to the game, input attempted moves by selecting numbers from a list and then do it over and over until the match was done. It was simple and addictive. In “Spinal Tap” parlance, TEW 2020 takes the strengths of that type of game and turns everything up to 11.

In brief, TEW 2020, produced by Grey Dog Software and available for Windows on PC, puts you in charge of the business side of wrestling. You choose a promotion and you run it: the bookings, the roster, the contracts, the TV deals, ticket prices, merchandise … it can seem endless.  The game comes loaded with original promotions, wrestlers, referees and others. It’s up to you to manage what has become known to the game’s loyal players as The Cornellverse (named after one of Ryland’s original game characters named Tommy Cornell).

To give you a sense of some of the options for storytelling within the game I’ll tell you about the tale of The Great Avatar and Leaf LeBaum. After choosing The Great Avatar to be my character, I took control of a company called United States Pro Wrestling. Among my first self-appointed missions was to familiarize myself with my roster.

For some reason, Leaf LeBaum stood out to me and not exactly in a great way. I didn’t care for the bemused look he wore on his profile picture. I started to explore his profile and attributes and clicked on a feature called “Talk to Worker”. In here, there are a slew of questions and topics that you can use to engage in a quick conversation with anyone within the company. 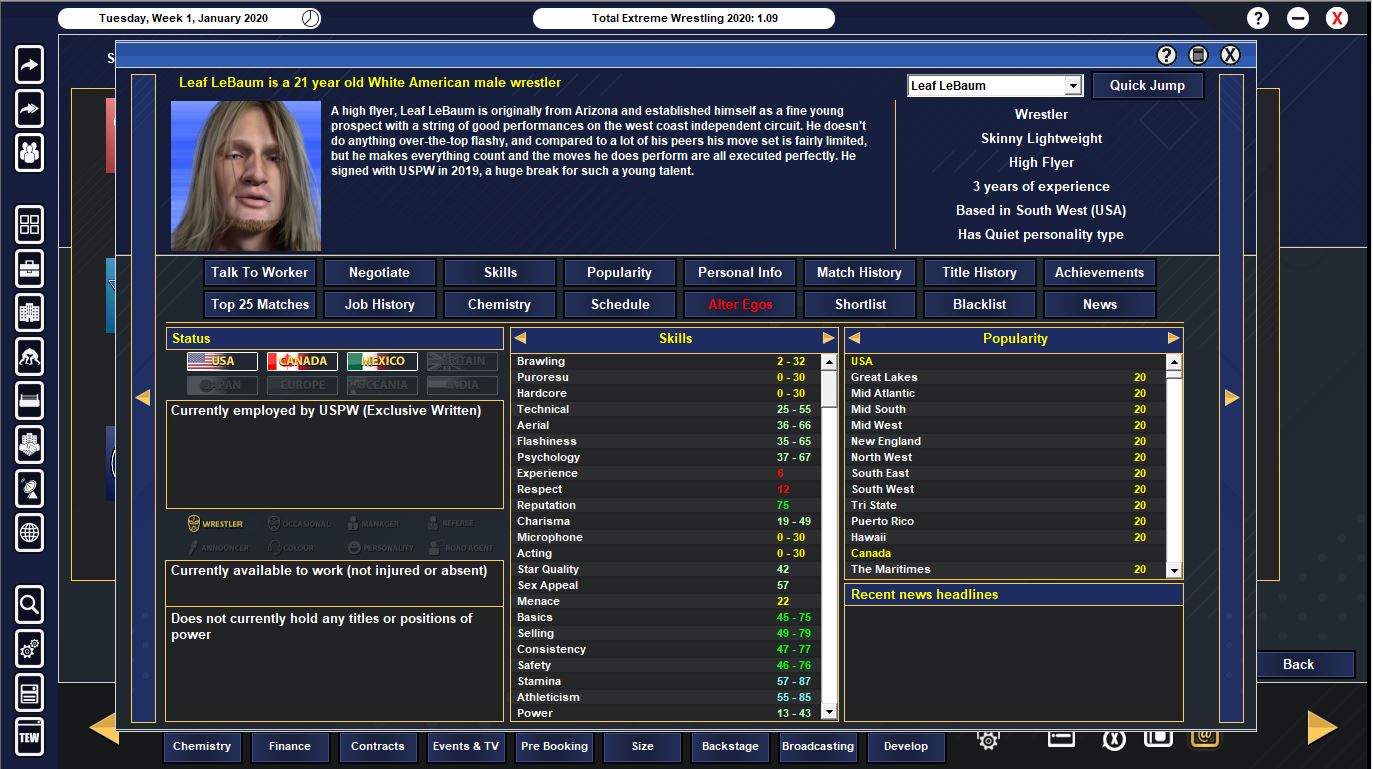 Something about the look on Leaf LeBaum’s face made me go a bit power-mad.

I start with what is for my money the only topic that matters: I tell him that “I’d like you to consider putting someone over”. I’m once again presented with the list of my roster and give LeBaum the name of the wrestler he’ll be losing to: Grandmaster Phunk.

LeBaum’s immediate response? “I’m not interested in considering putting someone over.”

Well, that puts me right into evil owner mode. I start asking him other ridiculous questions like if he’s open to being in a deathmatch, losing his hair, or whether it’s time for him to retire (he’s 21 years old). With each refusal to go along with my ideas, I become more determined to chop this guy down.

I finally do get a yes from him to change his style to a comedy wrestler. Then I place him into a stable of women wrestlers to play the role of “lackey”. I book the opening of a TV show between him and myself for me to give him an ultimatum: a “my way or the highway” kind of thing. The post-event breakdown claims that the crowd was confused and bored by the segment.

Let me pause here to explain my earlier comment about this being a perfect game for an armchair booker. If you’ve ever sat in your living room and listed off all of the improvements you would have made to an episode of any wrestling company’s TV show then you owe it to yourself to try booking a show in this game. What kind of match will get the crowd pumped up during the pre-show? What segment should you open with? For what length? How long do you give for a backstage clip of a wrestler getting ready for their match? How about for just walking around backstage? Will you listen to advice from agents and wrestlers that someone is not being used to their fullest potential in the type of match you’ve created? Will your top star get upset if you announce right before the show that he’s losing his title in a very short match? More on that later but the answer is yes. Yes, he will be very upset.

This is the kind of detailed storytelling that you can get caught up in with this game. The decision potential gamers have to make is whether they will trade the depth of gameplay for actual in-ring wrestling. If that’s not something you can do without, then this is simply not the game for you. If you’re happy to have a game like this to play in an in-depth universe sandbox, while playing another game to get your kicks in the ring, then you’d be hard-pressed to find a more thorough experience.

There are some issues with the game, naturally. The fallout from your decisions don’t always make sense. Some wrestlers will answer, as LeBaum did earlier, that they’re not willing to put someone over but if I use another, similarly-phrased question and ask them how they feel about losing to so-and-so at an event, they may answer yes.

The crowd’s reactions can seem arbitrary in terms of how much enthusiasm they show for a match, or an event, or for how over a wrestler is, but I’m willing to give that a break as, and let’s be honest here, crowd reactions don’t always make sense in real life.

I would like to see some kind of option for streamlining certain elements if you so wish. I’ll get back to detailing what happened with The Great Avatar and Leaf LeBaum in a moment, but the couple of weeks’ worth of story that I concocted took a long time to play through. That is, of course, part of what the game has to offer: both the macro and micro-management required consume both your time and attention. You won’t breeze through weeks, months, and years like you will in other wrestling games.

It would be nice for times, when you’re in the mood, to just blitz through some of the options. For those of you that know the dice-rolling baseball simulation game called Strat-O-Matic, you’ll know that it features a very in-depth and enjoyably complicated system of play, while also offering a stripped-down, simplistic and still fun version of rules as well. TEW 2020 could benefit from such options.

Back to me and LeBaum. Still seeking to have him bow down to my authority, I have him lose a bunch of matches on pre-shows, and none of them in pretty ways (you do have exact control over how matches will end by giving instructions to road agents). LeBaum, as you may expect, is becoming unhappy. It doesn’t get any better when I book myself into a match against him, squashing him in a couple of minutes thanks to interference. I even ridicule his performance in front of the entire roster backstage after a show.

At this point I stop and get control of myself. I’ve gone too far to the dark side. I look to make it up to him in a very WCW way: I give him the National Title by having him defeat the champ in two minutes to open a TV show. LeBaum is happy, though not as happy as you’d think. The crowd is not. My ex-champ is definitely not.

It seems that I’ve lost control of my own company mere weeks into ownership.  The good news is that I’ve got time and all of the decision-making power that I need to try and fix it.

One final thing to mention: The Cornellverse is not your only option for the population of your game. Another longstanding tradition with the TEW Series is the option of adding real-life user-generated modifications which will bring a massive library of promotions and workers into the world for you to manage. 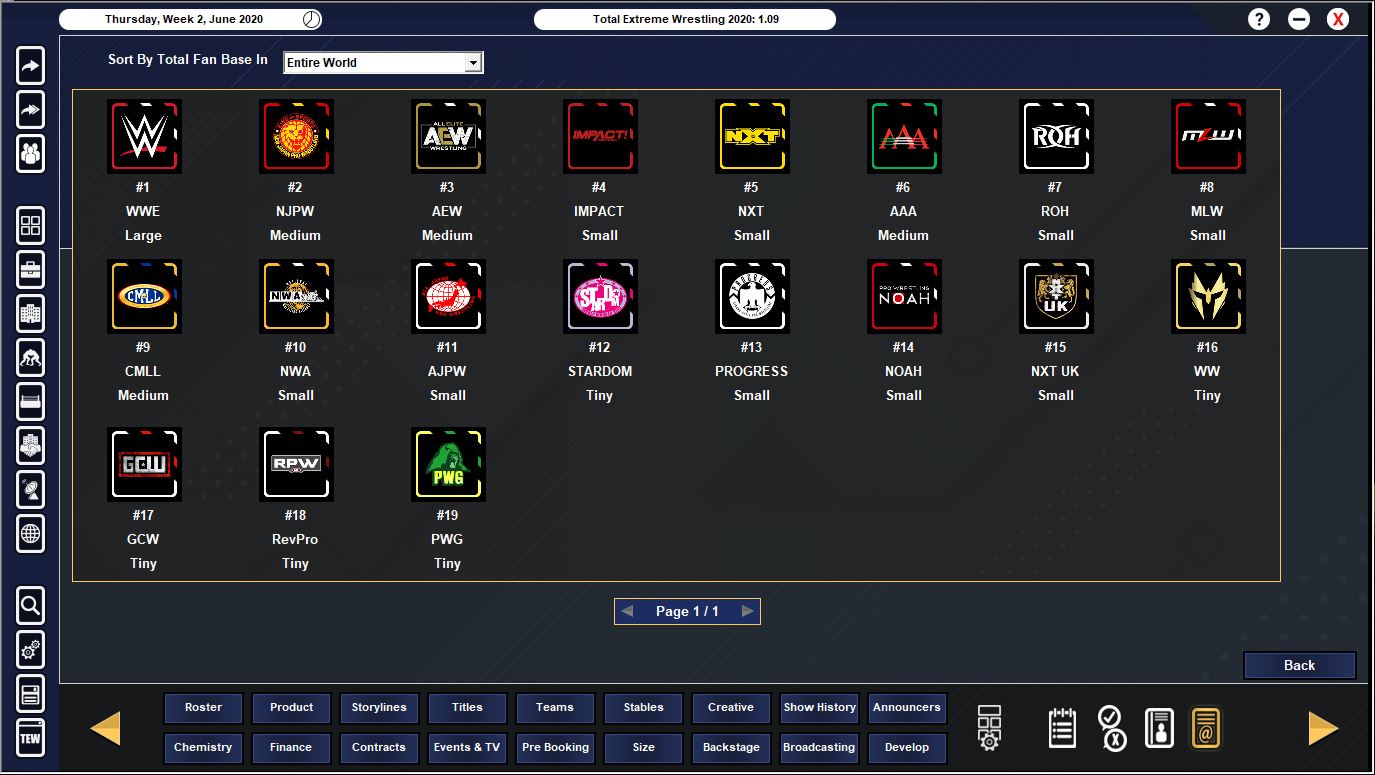 A listing of all promotions available to you once you’ve added the real-life mod.

This adds an obvious element of familiarity to the world and lets you fantasy book to your heart’s content. Want to see this year’s WrestleMania World Title matches last longer than a few minutes? Done. Want to take on ownership of MLW and try to topple the WWE? Go for it.

Me? I’m not done with Leaf LeBaum. I think maybe I’ll call a truce, become his manager and try to take him to the top the right way. Or, maybe I’ll put him in that “Loser gets his head shaved” match he’s so worried about. I guess it will depend on my mood that day.

A highly recommended, exhaustive exploration of what it might be like to run a wrestling promotion. Just know what kind of game it is, what it offers, and what it doesn’t!