El Phantasmo is one of the best, just ask him

He is his own biggest fan and why not? El Phantasmo has worked 15 long years to get where he is today. After making his in-ring debut in 2005, El Phantasmo left behind a promising career in film production to pursue his passion for pro wrestling full-time in 2016. He said goodbye to British Columbia and joined the British promotion Revolution Pro Wrestling. 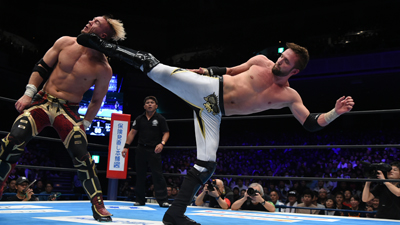 El Phantasmo is a pain in Will Ospreay’s neck. Photo: @bulletclub_official.

Now, he is one of the biggest stars not only in the UK but in New Japan Pro-Wrestling and the world.

Growing up in Vancouver, Phantasmo had no plans on pursuing a wrestling career although he excelled in drama and gym in high school, which perhaps foreshadowed his future in the business.

“Wrestling was never a dream. It was something else to call myself the best at. I was editing Emmy Award-winning cartoons for Netflix when I decided to make a name for myself in the UK. It took me less than two years of wrestling in England to have multiple companies vying to sign me,” Phantasmo told SLAM! Wrestling.

Watching his best-friend Artemis Spencer in the ring at a local Extreme Canadian Championship Wrestling (ECCW) show is what lit a fire in Phantasmo and sealed the deal to begin with.

“I put two and two together and decided I could easily outperform everyone on that show,” recalled a perpetually humble Phantasmo. 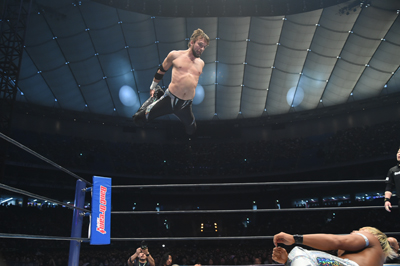 Phantasmo bounced around the Canadian indie wrestling scene winning the ECCW Championship three times, the ECCW Tag Team Championship once with Halo as the Masked Dudes of Doom and the Pacific Cup Tournament in 2009.

Artemis Spencer would win the tournament the following year beating now Undisputed Era, NXT fellow Canadian superstar Kyle O’Reilly. Spencer thanked Phantasmo for all his support by blindsiding him and nailing him in the “lower abdomen.”

Once in Rev Pro, Phantasmo won the British J Cup and stripped David Starr of the RPW British Cruiserweight Championship only two years after debuting for the promotion.

Things really took off for Phantasmo though when Rev Pro and NJPW held a joint show.

“I had some of the loudest reactions on the show as a virtual unknown to everyone there,” he claims of the impression he made on NJPW fans and management that day and who are we to disagree?

It wasn’t long before Phantasmo made the move to NJPW and became the newest member of NJPW’s most notorious and popular faction: Bullet Club. Wrestling in the shadows of former members AJ Styles, Finn Balor, Adam Cole, Kenny Omega, Cody Rhodes and others did cause Phantasmo to pause… but only for a moment.

“Of course there’s pressure. You’re going from wrestling on shows with 50 people to a live pay-per-view in front of 5,000 or more. You have one opportunity to make or break yourself but there really was no doubt that I wouldn’t make it. Flash forward nine months later and I’ve had one of the most successful debuts for any junior heavyweights in NJPW history,” said the former IWGP Junior Heavyweight tag team champion and 2019 Super J-Cup winner.

Phantasmo is only the second Canadian to win the prestigious J-Cup, the first being Wild Pegasus (Chris Benoit) during the first tournament in 1994.

Along with etching his name in the record books Phantasmo is proud of the other benefits winning the J-Cup brought him.

“It was great because I could wear the gold jacket instead of bringing my heavy LED jacket around,” he said. 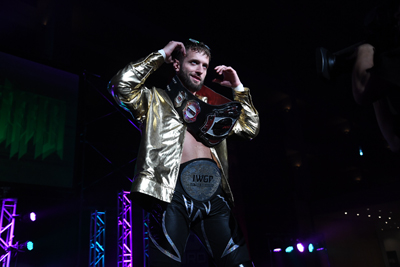 Naturally, when asked who his toughest opponent was during the tournament, only one name came to Phantasmo’s mind: Phantasmo, himself.

“My toughest opponent was myself because when I double-stomped Dragon Lee from the top rope over the barricade through a table I hit my head on a chair during the landing and gave myself a five-inch laceration on my forehead. There was blood pouring out of my head and to be able to retain composure, not faint and still put away one of the best wrestlers in the world is a testament to how tough I really am,” he said.

Although he has had a successful run as a tag team with his Bullet Club partner-in-crime Taiji Ishimori, El Phantasmo has IWGP Junior Heavyweight champion Hiromu Takahashi in his sights whenever he returns to singles action.

“I want to wrestle Hiromu (Takahashi) to become the new IWGP Junior Heavyweight champion and cement myself as one of the greatest Canadian wrestlers of all time,” he said without hesitation.

Whether it be as a loyal member of Bullet Club or as the leader of the HDBNG Club, Phantasmo feels he has something to prove to wrestling fans and his critics all around the world about what he already knows.

“My goals are the same when I decided to come to NJPW: Step into the ring with the best professional wrestlers on this planet and not only show the world that I can keep up but I can beat them,” he said.