Mat Matters: A professor, a snowstorm and Killer Brooks

The sad news that Tim Brooks has been moved to hospice care after battling cancer for years got me reminiscing. Here’s my odd tale of a professor, a snowstorm and a Killer.

In the fall of 1973, I was enrolled in college in Rochester, New York, studying photography. My love of pro wrestling traveled with me to the campus, and The Sheik (Ed Farhat) promoted shows at the nearby Dome Arena.

As a college project, I did a photo album of Killer Tim Brooks. The front cover was a classic oil painting titled “Portrait of an Actor.” The back cover had Killer posing with a beer. I gave a copy to Brooks, and he loved it.

But my professor gave me an A-. I asked him why I didn’t merit higher. “Because wrestling is fake,” he scowled. 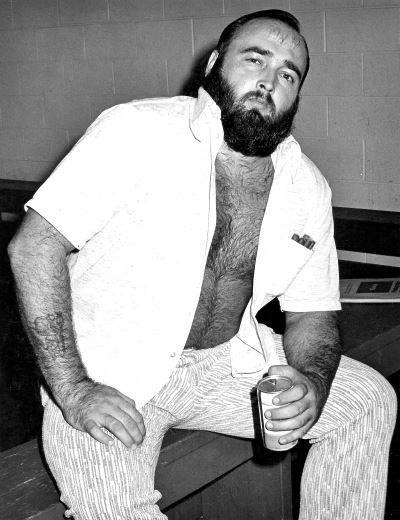 Brad McFarlin’s photo Killer Brooks from his photo essay that he did for school.

That winter, there was a big storm, and the snow was coming down hard. Brooks was traveling with Frankie Laine and they were worried about finding a hotel to crash in before the snow got really nasty. Generally, the wrestling shows started at 7 p.m., and ended by 10 p.m., so they figured they would be able to find a place to stay after the card ended. The next date was in Buffalo, N.Y. which was about an hour and a half away.

The main event that night had Tony Marino facing The Sheik, and the finish had Brooks running out with a chair to K.O. Marino, allowing Sheik to win, and start a feud between Brooks and Marino. For the record, they had off-duty Rochester cops at the Dome Arena, but they weren’t alert at the end of the night.

Brooks came running out with the chair, and some drunk fan tried to stop him by hitting him from behind with another chair. Brooks kept on going though! Frankie Laine saw the whole thing and even though he was a babyface that night, he walked up to the drunk fan, grabbed him and started punching his face in. Other drunks saw this, and a riot broke out. Brooks came back from ringside and waded right into it.

At some point, the cops finally got involved and eventually Brooks, Laine, Sheik and Marino made it back into the dressing room.

The guy who started the whole thing was rather busted up and had quite the bloody mouth on him. He insisted that Laine be arrested for hitting him, and he claimed there was no reason. The police were in no mood for any of it and just threw the guy out into the storm and encouraged the guy’s friends to leave as well.

The wrestlers asked me to watch the parking lot and report whether anybody was waiting behind to cause further trouble.

When Brooks and Laine came out, I suggested we head to my college dorm, which was only about 15 minutes away, and there was the promise of cheap beer sold right on campus (drinking age was just 18) not to mention pizza and other junk food. Maybe the thought of co-eds helped too. Long story short, Brooks and Laine got into their car and followed me and my buddy back to campus, driving carefully in the blowing snow. 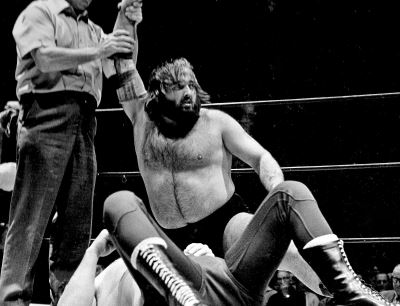 Killer Brooks is declared the victor. Photo by Brad McFarlin.

We got lucky and found them a vacant dorm room, so they had time for a quick shower and then we hit the bar. Damn, pitchers of beer were $2,00. We got a little drunk to say the least. Killer drank straight from the pitcher. Why bother with cups? Life was short and the beer was cold. So there we were, having a fun time without a care in the world. Sure, we got some strange looks but plenty of kids in the 1970s had dirty long hair and grew beards.

It probably helped in that Brooks looked like a killer. His hair was a mess, his beard unkempt, and he had dozens of gig marks on his forehead from blading through the years. I figure he was legit around 250 pounds and about 6-foot-2. Plus he and Frankie were both sporting fresh lumps and bruises from the riot. He was not somebody you mess with. And Frankie was Frankie.

At close to 2:00 a.m., my photography professor poked his head into the tavern. So me, being drunk and a smart ass, brought the professor over to our table. I announced, “Professor Klotz, this is the guy I did my book on.” The professor — who was about 150 pounds and 5-foot-7 or so — got very, very pale. He said, “Oh, that was some marvelous photojournalism.” He shook hands with Brooks, gave Frankie a quick glance, and got the hell out of there as soon as he could. We all laughed ourselves silly.

We left the bar with the “take outs” — 32 oz. plastic containers of more beer. It was quite the night. 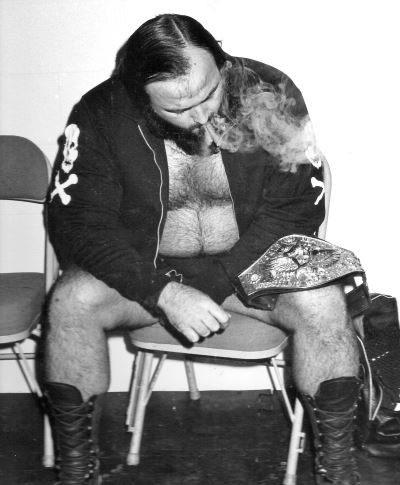 Killer Brooks, with cigar and title belt — what else matters? Photo by Brad McFarlin.

Killer, as your time draws nigh, thanks for the laughs and friendship through the years.

John (Bradford) McFarlin has been photographing professional wrestling since 1967. Starting with Wrestling Revue and having a long run with the Apter Magazines. After a brief retirement in 2002, McFarlin got involved again when his young son Matthew started showing a “fanatical interest” in the WWE. He also is manager “Handsome” Johnny Bradford on the Michigan scene.