While it’s sort of refreshing that AEW doesn’t have pay-per-views every three weeks, it’s been a while since the last one. We’re creeping ever closer to Revolution, however, and tonight’s show from Austin should put some more pieces in place. Live to TNT we go, and straight to in-ring action.

The Dark Order interrupts right before the opening bell, with Evil Uno promising that there are more of them than you might think and possibly closer than expected. He says they are preparing for the arrival of Matt Ha… I mean, the Exalted One, but Christopher Daniels offers to go looking for them as the match gets underway. The biggest questions are whether the Young Bucks will somehow get involved or whether Omega and Page will have problems among themselves. One thing’s for sure: Page is as over now as AEW probably hoped he would be when the promotion was first born. Sometimes it just takes a little longer than expected. The champs cook up a Buckshot/V-Trigger combo to finish off Frankie Kazarian, which is pretty cool.

After the champs depart, Evil Uno leads the four-man version of the Dark Order (no creepers today, apparently) to the ring. The Best Friends quickly come to the aid of SCU, but two more heel teams, Butcher and Blade and TH2, decide to wander down to the apron as well. The Young Bucks join the fray and now we’ve got ourselves a (superkick) party. The Jacksons clear the ring and dive onto everyone but SCU on the floor, perhaps

Jim Ross talks to Santana, who tells a very personal story about his dad losing his sight at age 14. They also discuss Jon Moxley, of course, as they’re going to meet in the ring tonight. Could be the first eyepatch match I’ve ever seen.

A video from Darby Allin uses the sign gimmick of Sammy Guevara in a clever retort, calling it a mistake to have smashed his throat with a skateboard and challenging him to a match at Revolution. The announcers note that Darby is out of action until he’s medically cleared to return, which conveniently seems like it might be in about two weeks. See, because that’s when Revolution will be, and … you see where I’m going with that.

Call this one a mild surprise, or at least a nice reminder that sometimes wrestlers are still booked to win in their hometowns. Despite the Big Hurt lurking on the outside, Rhodes gets a win. Afterward, he tells “Jericho’s bitch” to turn around, questioning whether Hager will ever step in the ring. Since challenges for matches at Revolution are the cool thing to do, Rhodes throws down the gauntlet for a bout against Hager. That would require him to actually wrestle, of course.

Wow, we’re going to this well again with Tony Schiavone interviewing Dr. Britt Baker again, eh? This one is at least taking a new, funny twist because Baker claims she did Yuka Sakazaki a favor by “extracting” an abscessed tooth last week. She also boastfully claims whoever wins the AEW Women’s Championship Match will still be second to her. The “horns down” hand sign though, Britt? That’s against Big 12 rules!

If you fancy the classic David vs. Goliath narrative, this should do the trick, with the exception that David is the champ instead of the chaser. There’s an interesting spot early on that sees Riho run along a table that Rose sets up on the floor to hit a dropkick, and the action continues to be very well laid out throughout, giving the impression that either woman could win. It’s not hyperbole to say this could be the best fan reaction to a women’s match in AEW’s short history. In the end, Rose has her hand raised, becoming the second AEW Women’s Champion.

Jericho cuts a promo on Moxley, revealing that if he survives Santana tonight, he’ll have to face Jeff Cobb next week. Yep, as rumored, Cobb is on his way in, and apparently at least aligned with the Inner Circle.

A video package takes us back through Cody taking 10 lashes from MJF last week, and Brandi Rhodes doesn’t seem too happy about having to relive it. Is her heel thing with Awesome Kong just done now or what?

Both men send their seconds (and in the case of Marko Stunt, thirds) to the back. The announcers talk about how young both men are (MJF is 23, Jungle Boy 22) and discuss how they could easily be PPV main eventers a decade from now — or much sooner. Excalibur has to be happy that he gets to say tope suicida twice in a row and then finish with tope con giro. And who wouldn’t, honestly? Up against a tougher fight than he probably assumed, MJF calls for Wardlow, who slips him his diamond ring, which he uses to put some extra oomph on a right hand. The Double Cross seals the deal, and Wardlow gets in a shot after the bell before the rest of Jurassic Express hustles to the ring.

To my delight, this is indeed an all eyepatch match. It probably doesn’t help when Ortiz spits alcohol into Moxley’s remaining good eye, though that doesn’t stop him from eventually finding Santana for a Paradigm Shift. Mox barely has time to take a breath after the bell before the dogs are all on him, as in the entire Inner Circle. Jericho’s championship belt and Ortiz’s loaded sock both make an appearance, and Guevara comes flipping from the top rope with a 630 Senton as well. A Judas Effect leads to a cover and mock three-count from Ortiz, and Le Champion calls for Cobb as well. He takes Moxley on a free Tour of the Islands, illustrating the very real hazards of having no friends on the roster as the Inner Circle stands totally triumphant at the end of the night. See you in seven! 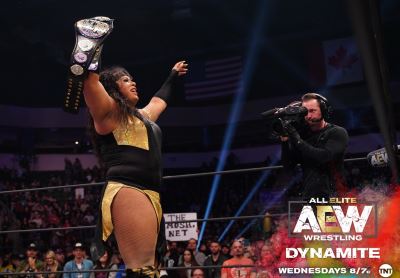