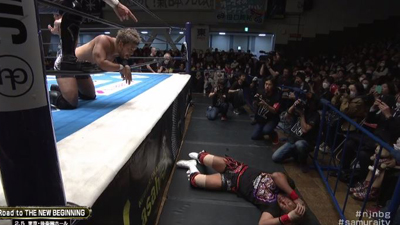 Just like last night, wrestlers are eliminated when they are pinned, submitted, DQ’d or thrown over the top rope and both feet touch the floor. The match continues until one team is eliminated.

Bullet Club jumps Los Ingobernables de Japón. Kenta rams Naito’s back into the ring. Phantasmo then assists Kenta in the beatdown. Phantasmo heads back into the ring with Ishimori to double-team Hiromu. Kenta slams Naito’s head into a steel table. Hiromu is whipped into an exposed turnbuckle over and over by Jay White and Kenta. Hiromu goes into survival mode as Bullet Club just pummels him for minutes on end while the rest of LIJ are hurt on the floor.

Sanada puts Jay White to sleep on the apron with Skull End. White falls to the floor. Gedo distracts Red Shoes so he doesn’t witness the elimination. White low-blows Sanada and he hits the floor too. Red Shoes rules that the pair of them should be eliminated so they are.

Unfortunately, Phantasmo is rolled-up in the ring seconds later by Hiromu. Kento kicks Hiromu to the floor as he celebrates.

The match comes down to Kenta and Naito, who just happen to be fighting for Naito’s IWGP Heavyweight Championship and IWGP Intercontinental Championship at Sunday’s show. Naito puts up a valiant effort on the apron. It isn’t enough though. Kenta kicks him off becoming the sole survivor.

As Naito is led away, Kenta mocks him.

“You will have to do better than that on Sunday!” he yells after him.

A back and forth battle between two Young Lions who have a very promising future in NJPW. The match is close to being a time-limit draw. Kidd does his best to fight through a Boston Crab but eventually he taps out.

Tsuji has the strength advantage over Taguchi. There is no countering Funky Weapon’s technical ability though. Tsuji who has a taped up shoulder even calls for time at one point. Funny that. Funky Weapon works over Tsuji’s ankle. Tsuji submits to the Ankle Lock.

Manabu Nakanishi and Hiroyoshi Tenzan work over Honma with Tenzan giving Honma a Kokeshi. Nice spot that. Honma and Makebe focus their attack on Nakanishi’s left leg, knee. Honma actually slams Nakanishi but he misses a Kokeshi of his own. Tenzan misses a second Kokeshi. Honma delivers one of his own on Tenzan. Makabe flips Tenzan off only to take a Mountain Bomb in response. All on his own, Nakanishi brings Honma and Makabe down to their knees with chops and a double clothesline. Makabe pins Nakanishi with the King Kong Knee Drop.

Eagles gives Douki’s leg a 450 Splash from the top rope and a Robinson Special to force him to quit. Sabre Jr. and Ospreay argue. “I am going to take that belt from you!” says Ospreay pointing to the RPW British Heavyweight Championship. “How many times have you tried?” responds the Most Electrifying Superstar in Wrestling today.

Suzuki-gun attacks before the bell. Taichi chokes Okada over the ringside barrier. El Desperado brings in a steel chair. Sho drop kicks it into Desperado’s face. Desperado clocks Sho in his injured knee with a steel chair shot. Taichi pins Sho with the Last Ride. Sho suffers a Conchairto to the knee. Yoshinobu Kanemaru, El Desperado pose with the IWGP Junior Heavyweight Tag Team Championships. Kanemaru and Desperado face Roppongi 3K for the belts this Sunday.