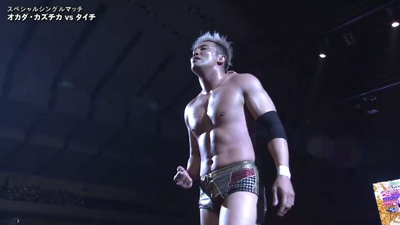 The main event of the second day of New Beginning was a grudge match between Taichi and Okada who were both young lions at the same time in their career. However, Okada went on to become the longest-reigning IWGP Heavyweight champion in NJPW history while Taichi has been a mid-card wrestler. Taichi fought like a true heel by using a metal glove and using his manager Miho Abe as a shield to protect him from Okada. Even with these unfair tactics, Taichi wasn’t able to defeat Okada.

Taichi brought a metal glove to the match and Okada saw it and was able to knock the metal glove out of Taichi’s hand. The match spilled to the outside and Okada hit a cross body on Taichi on the guard rail. Okada whipped Taichi into the guard rail. When the match returned to the ring, Taichi delivered a high angle suplex on the back of Okada. The match went to the outside again and Taichi wrapped the microphone cable around Okada’s throat. The match returned to the ring and Taichi delivered a series of hard kicks to Okada’s back. Okada hit a desperation DDT and both men laid on the mat to recover. Taichi rolled to the outside of the ring and Okada was about to dive onto Taichi but Taichi pulled Miho Abe in front of him. Okada rolled out of the ring and Taichi took advantage of the opportunity and brought Okada down the ramp. However, Okada delivered a shot gun dropkick on the ramp. The match returned to the ring and Okada hit an elbow drop from the top rope. Taichi delivered a dropkick to Okada. However, Okada delivered two rainmakers and Taichi hit a low blow on Okada to get a near fall. Okada hit another rainmaker followed by a tombstone and another rainmaker for the three count to win the match.
…
In other matches on the card:

Henare has won all three of their past single matches with Tsuji. Henare delivered a shoulder block to knock Tsuji off his feet. Henare followed up with a rear chin lock to keep Tsuji on the mat. Henare locked in a Boston Crab and Tsuji was able to grab the ropes to force a break. Henare hit the Toa Bottom for the win over Tsuji.
…
Hiroyoshi Tenzan, Manabu Nakanishi & Tiger Mask beat Togi Makabe, Tomoaki Honma & Yuya Uemura

Nakanishi and Uemura started this match with Nakanishi chopping Uemura down. These are the final matches that Nakanishi is wrestling before his retirement. Nakanishi and Makabe had a physical exchange with shoulder blocks and chops with Makabe eventually getting knocked down. Tiger Mask hit the Tiger suplex on Uemura for the win.
…
El Phantasmo defeated Gabriel Kidd

This match is a preview of the match we will see later in New Beginning where the NEVER Openweight 6 men titles will be on the line. Evil attacked Ishii when the bell rang. Eagles worked over Bushi’s leg. Eagles applied a leg lock on Bushi who gave up for the second night in a row with the same submission. Eagles said that they will be the new 6 men NEVER Openweight champs.
…
Jon Moxley, Roppongi 3K & Ryusuke Taguchi defeated Minoru Suzuki, El Desperado, Yoshinobu Kanemaru & Douki

The Bullet Club jumped Los Ingobernables de Japon before the bell rang as LIJ was making their entrances. KENTA delivered a DDT on Naito on the outside of the ring while White wrapped a camera cable around SANADA’s neck. Ishimori quickly got a small package on SANADA for a near fall. SANADA applied the Skull End on Ishimori who tapped out.
…
British heavyweight title: (c) Zack Sabre Jr. defeated Will Ospreay

Both men chain wrestled to start the match off. Sabre Jr. was able to push Ospreay into the corner of the ring and both men broke clean. Sabre Jr. was attempting to ground Ospreay during the match while Ospreay attempted to quicken the pace. When Ospreay was able to increase the pace of the match, Sabre Jr. would roll out of the ring to break Ospreay’s momentum. Sabre Jr. applied a ground cobra but both men rolled into the ropes and Sabre Jr. broke the hold. Sabre Jr. applied the cobra again while Ospreay was standing. Ospreay collapsed and the referee stopped the match and awarded the win to Sabre Jr. who retained the British heavyweight title. Don Davies is a life-long wrestling fan of 30 years that has enjoyed many eras from multiple promotions around the world.