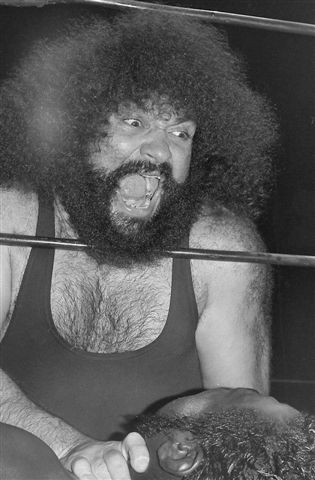 Pampero Firpo gets the better of Bobo Brazil in Detroit. Photo by Dave Drason Burzynski

Early on January 9, the family of Pampero Firpo released the news that the legendary wrestler had died just short of his 90th birthday.

“My beloved father, Pampero Firpo, (Juan Kachmanian), passed away today just a few months shy of his 90th birthday. As a professional wrestler for over 30 years, he thrilled fans around the world, wrestling in 21 different countries across 5 continents,” notes his Twitter account, run by his daughter, Mary Kachmanian Fries, and son, John Kachmanian. “At home, he was loving, generous, and protective. He was faithful to God, devoted to his family, and made friends wherever he went. At the end, he expressed gratitude and peace for his extraordinary life well-lived.”

Dory Funk Jr.’s greatest memory of Pampero Firpo is not in the ring, but from the road. “I made the most harrowing trip from the HIC Arena in Hawaii after wrestling there to the airport with Pampero Firpo driving. I feared for my life. He did get me to my flight at the airport on time. Man, the way he drove, I could not believe it!” said Funk Jr. in The Pro Wrestling Hall of Fame: The Heels. “He was a wildman outside the ring, he was a wildman behind the wheel.”

In the ring, Firpo, or The Missing Link as he was known in Hawaii, was equally unpredictable. His style was indeed that of a “Wild Bull of the Pampas,” all action and strength, and little science. During his 30-year career — 6,881 matches, 21 foreign countries, by his count — Firpo was a heel until the 1970s, with his frizzy, caveman-hair, guttural roars and smashed-up nose. And don’t forget his little shrunken head named Chimu.

“In my situation, I had to be a bad guy,” Firpo told Ring Around the Northwest. “For my style and my vocabulary, I think as a heel I was to be hated more than anyone else. When I switched to babyface the fans didn’t know what to do. That is when you have the complete control of two different personalities. Not too many people have that gift. I am not praising myself, just saying things I feel are true.”

One of those heels who tried to get heat on the miscast babyface Firpo was Killer Tim Brooks, who worked with him in Detroit. Brooks learned to “stay on him hard, because a guy that looked like him, it was not easy to get heat on him because the people weren’t going to feel sorry for a rugged guy, a rough-looking guy, they don’t feel sorry for that guy easy. So a heel really has to put out to build a heat on a guy like that.”

Whether as a good or bad guy, Firpo’s big move was his claw hold, el garfio, which went over an opponent’s face. Firpo was ahead of his time with the catchphrases, and no doubt could have made a fortune in merchandising in today’s WWE. “I weel take care of beez-nes!” he’d shout, his eyes sparkling with maniacal glee, and then end the interview with “It is I, it is me, Pampero Firpo, the Wild Bull of the Pampas….OOOOOOOOH YEAHHHHHHH!!!!”

Born Juan Kachmanian, on April 6, 1930, in Argentina, he grew up around sports, where his father promoted boxing. Kachmanian was into boxing and track and field before being drafted into the army. He learned the basics of wrestling at home, and in August 1957, he arrived in Texas, and found work with promoter Morris Sigel as Ivan The Terrible, a name he’d use until the early ’60s. Though his English was non-existent (but he would later speak seven languages), Firpo would claim the Texas title within three weeks. The tours of St. Louis, Chicago and Nebraska all built him for his runs in the Northeast’s Capitol Sports in the late 1950s and early 1960s, often battling his idol Antonino Rocca. He’d return to the New York rings during Pedro Morales’ WWWF title run as a formidable challenger.

Firpo “wasn’t a good mechanic or a good guy, wrestler-wise, but he was Pampero Firpo. He had a look about him that was believable,” said Larry Hennig. Al Tomko said Firpo was stiff to work with. “He was a short but stocky guy, a hard guy to move around. He wasn’t that easy to work with. He didn’t take bumps or anything.” 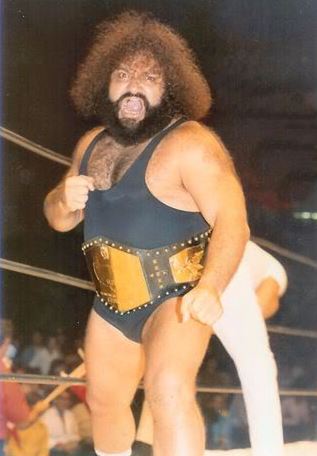 Pampero Firpo at the U.S. champion in Detroit. Photo by Dave Drason Burzynski

In Hawaii, Firpo became an institution, and his battle cry was imitated by the locals, as well as “Macho Man” Savage years later. “In Hawaii, after the governor, I was the most popular man,” he said. It was also where Firpo underwent life-saving surgery, where a one-foot long perforated part of his intestine was removed. But it didn’t stop his wrestling career, it just forced him to change his style.

“Firpo always told guys never hit him in the stomach or he’d die,” recalled Jim Lancaster, who worked with Firpo in the mid-’70s around Detroit. “You’d get in the dressing room and we’d be talking over the match and he’d say, ‘Jeem, you hit me in my stomach, I die. Don’t hit me in my stomach; I die.’ Then he’d start talking to you about some kind of surgery he had 20 years ago.”

With its natural ties to Pacific Coast territories of Los Angeles, San Francisco and Oregon, Firpo would work regularly until the late 1970s, and occasionally until his final match in 1986. Mando Guerrero only worked with Firpo at the end of his career. “He was using a lot of gimmicks to stay a heel, because he had the voice for it. But his body could not endure punishment anymore.” 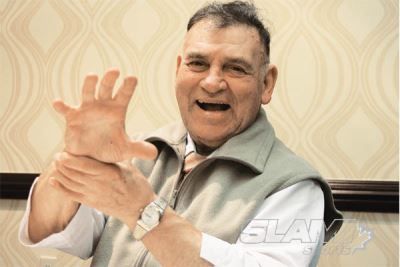 Pampero Firpo at the NWA Fan Fest in Charlotte in 2011. Photo by Ashley Forrester

Firpo recognizes that he wasn’t an ordinary character that had a lot of longevity, even if he did. “I always have that heavy respect for the wrestling fan. Even if I make them upset, even if I make them angry, even if I make them applaud, because psychology is so important,” he told RATNW. “I can cause a riot and I can cause peace to break out. Make it that way, you become a headliner. Now, in wrestling, you have four positions — preliminary, semi, special attraction, and then the main event. Above that, you have the Box Office Attraction. I will tell you without hesitation and not any bragging that I believe I was the top one, the Box Office Attraction. Wherever I went, I always was headlining.” 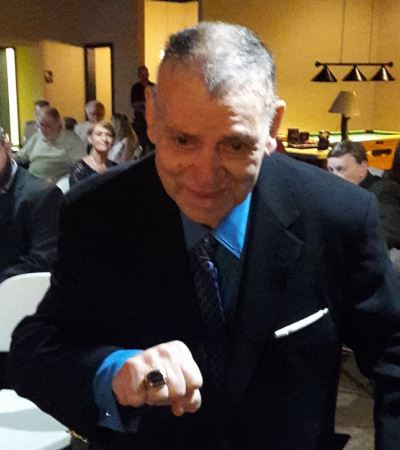 Wrestling enabled Firpo to bring his family to America, which he considers his greatest accomplishment. He worked for the U.S. Post Office near his San Jose home after retiring from wrestling, though his hair was not longer as wild as it once was.

He was inducted into the Wichita Falls, Texas-based Pro Wrestling Hall of Fame in 2018, a moment captured by SLAM! Wrestling writer Carmine DeSpirito, in his story: 88-year-old Pampero Firpo steals show at PWHF induction.