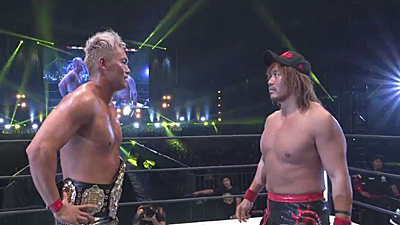 For North American fans, Wrestle Kingdom 14 at the Tokyo Dome ended in the wee hours of Saturday morning, but it was worth it for the double main event — Kazuchika Okada versus Kota Ibushi for the IWGP heavyweight Championship, and Jay White versus Tetsuya Naito for the IWGP intercontinental Championship. The winners will face off at Wrestle Kingdom 14 Night Two in the double gold dash. Both matches were terrific and worth seeking out.

After Liger’s 35-year career in the wrestling business, this will be his second last match of his career. This match kicked off the main card. It was very nostalgic watching the older wrestlers making their entrances. Liger entered the ring and bowed to each of his competitors.

Liger called out Sano to start the match. Liger quickly grounded Sano after the bell rang. However, Otani gave Liger a facewash in the corner of the ring. Otani isolated Tiger Mask in their own corner. Tiger Mask hit the Tiger driver on Takaiwa to give Tiger Mask time to make the hot tag to Fujinami.

Liger and Taguchi came into the ring and Liger got a near fall on Taguchi. Taguchi hit a Dodon on Liger for the win. After Taguchi celebrated, Liger’s music played and everyone in the ring hugged Liger.

This match is a preview of the British Heavyweight Championship match between Sabre Jr. and Sanada on night two. All men brawled in and outside of the ring to start the match. Evil and Suzuki were the only two in the ring and Suzuki applied an armbar on Evil. Both men went to the outside and Suzuki hit Evil with a chair.

El Desperado came into the ring and grounded Evil with a Camel Clutch. Taichi entered the ring and Evil hit a suplex to allow him time to tag out to Takagi who cleaned house on Suzuki-gun. Sanada put the paradise lock on El Desperado and then unlocked it with a dropkick.

Sabre Jr. and Bushi entered the ring and the pace picked up. Sabre Jr. locked in a submission hold and Bushi verbally gave up because both of his arms were trapped so Bushi couldn’t tap out.

This match is a preview between the NEVER open weight title match between KENTA and Goto that will occur on night two. Yano delivered a shoulder block to Fale. Yano fell down and tried to undo the turnbuckle pad. However, Fale chased Yano out of the ring.

The Bullet Club isolated Yoshi-Hashi in their own corner and made frequent tags to continue the domination over Yoshi-Hashi. Ishii came into the ring and knocked Owens off the apron of the ring and attacked Fale.

KENTA and Goto entered the ring and both men hit each other with stiff strikes. Other members of the Bullet Club continued to work over Goto. Goto hit the GTR on Yujiro for the win. Goto and KENTA stared each other down after the match. This gives Goto some momentum for night two when he takes on KENTA for the NEVER open weight title.

Robinson followed up with a cannon ball on Tanga Loa in the corner. The crowd started chanting “Juice.” Finlay entered the ring and they hit a double flapjack on Tama. The Guerrillas of Destiny hit the Magic Killer for a near fall. Finlay hit an acid drop on Tama to win the match and become the new IWGP tag team Champions.

When Archer split from the Killer Elite Squad with Davey Boy Smith Jr., he reinvented himself and became the IWGP United States Champion. As Archer has noted in interviews in the days leading up to Wrestle Kingdom, this will be the highest profile singles match in his career.

Moxley threw chairs into the ring as he entered the ring. This is Moxley’s first time in the Tokyo Dome. Archer came out with trash can lids and attacked the young lions at ringside. There is no pinfall or submission to end this match. A 10 count is the only way to win this match.

Both men brawled outside of the ring with Moxley whipping Archer into the guard rail. Archer and Moxley entered the ring and Archer hit Moxley with chairs many times and followed up with a trash can lid to Moxley’s back.

At the G1 special in San Francisco in July 2018, Hiromu Takahashi broke his neck and Wrestle Kingdom is his first major match back in action. Ospreay and Hiromu have had amazing matches in the past so it is a bit of a shame that this rematch has taken one and a half years to occur.

Ospreay took Hiromu down and rode him in an amateur wrestling style. Both men returned to their feet and the pace quickened. Hiromu powerbomb Ospreay on the edge of the ring apron. When they returned to the ring Hiromu chopped Ospreay.

Ospreay delivered a double stomp to the back of Hiromu’s head as he was draped over the second rope. The match went to the outside and Ospreay followed up with choking Hiromu over the guard rail.

The back and forth near falls in this match made the crowd cheer out of respect for both men. The pace of the match significantly slowed down as both men exchanged near falls. Ospreay hit the OsCutter for the near fall. Hiromu hit the Canadian destroyer for a near fall.

Hiromu hit a new finishing move that dropped Ospreay on his head for the win and to become the new IWGP junior heavyweight Champion. This was a great match with a great mix of high flying moves and the drama of the many near falls between the two men.

The winner of this match will face the Okada vs Ibushi victor for the IWGP heavyweight Championship on night two for the double gold dash match. After the bell rang, White went to the outside of the ring. Both men were about to lock up and White quickly went to the outside again to slow down the pace.

Naito grabbed Gedo by the beard and White attempted to save Gedo but Naito took advantage of the situation and attacked White. White delivered a series of chops on Naito. Gedo grabbed Naito’s leg so that White could inflict more damage.

Gedo grabbed a chair and hit Naito’s leg with it. The match went to the outside and White whipped Naito into the guard rail. White rolled Naito into the ring and suplexed Naito who quickly rolled out of the ring. When Naito returned to the ring, White delivered a dragon screw leg whip.

Naito spit in White’s face and hit a series of moves to turn the tide in the match. Naito insultingly slapped White on his head. Naito aggressively delivered a series of elbows while holding White’s wrist. White reversed it with a German suplex.

White spit on Naito’s face and hit a dragon screw leg whip in the ropes. White whipped Naito into the ropes but Naito fell down because his knee gave out. Naito was unable to put much weight on his knee when he stood up.

White delivered a snap suplex from inside of the ring over the top rope onto the edge of the ring, which looked nasty. White hit a chop block and followed it up with an inverted figure four to put pressure on Naito’s knee. Naito got to the ropes to break the hold and spit in White’s face.

Gedo came into the ring and Naito approached Gedo. White came up from behind Naito but he was able to turn around in time to attack White before White could attack him. Naito hit the Destino but the referee was knocked down. Naito hit a second Destino when the referee recovered but White kicked out. Naito hit the Destino for the third time and finally got the three count and won the match to become the new IWGP intercontinental Champion.

Naito limped from the ring to the outside. Kevin Kelly speculated how hard it will be for Naito to come back to the Tokyo Dome in 24 hours to challenge for the IWGP Heavyweight Championship.

The winner of this match will face Naito for the double gold dash match on night two. Both men circled each other while the crowd cheered for both wrestlers. Ibushi grounded Okada and worked over Okada’s leg. Okada attempted to pin Ibushi. However, Ibushi switched submissions and was on top of Okada’s back.

Okada was able to grab a headlock to ground Ibushi. Both men were wrestling cautiously as to not make a mistake. However, the pace quickened and both men exchanged a series of strikes. Ibushi grounded Okada again and locked in a submission, which Okada was forced to grab the ropes to break the submission hold.

The match spilled to the outside of the ring and Okada hit a draping DDT over the guard rail onto the floor. When the match returned to the ring, Ibushi hit a desperation drop kick and followed it up with a moonsault for a count of two.

Ibushi attempted to deliver a back-flip kick but landed directly on his head, which was scary to watch. Okada attempted a dropkick and Ibushi was able to double stomp Okada and followed up with a dive over the top rope to the outside.

When the match returned to the ring Okada hit the dropkick followed by the tombstone. Okada attempted the rainmaker but Ibushi held onto the ropes to save himself. Ibushi hit a series of very stiff punches on Okada. Okada came back with another tombstone on the apron of the ring.

Ibushi hit three kamigoyes for near falls. Okada hit a desperation dropkick so that both men were laying on the mat. Both men returned to their feet and exchanged forearms. Ibushi followed up with a series of stiff kicks. Okada hit a rainmaker for a very near fall. Okada grabbed Ibushi’s wrist and delivered a second rainmaker followed by a third rainmaker but Ibushi hit a series of stiff kicks. However, Okada hit another rainmaker and pinned Ibushi for the win and to retain his IWGP heavyweight Championship. Okada will face Tetsuya Naito on night two for the double gold dash. Winner: Kazuchika Okada