Mere days away from one of the biggest pay-per-views of the year for wrestling promotion Ring of Honor, appropriately named Final Battle, and Mark Haskins simply can’t wait to jump into that squared circle with his opponent for the night, the legendary Bully Ray.

“I’m super excited for it,” revealed the 31-year-old Haskins, via a Skype interview, recently. “I finally get my hands on Bully Ray, who has been a thorn in my side for the past few months.” 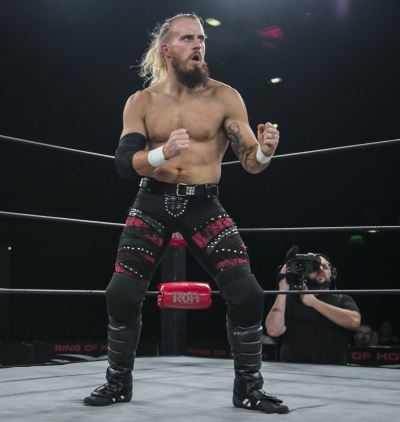 The two have been involved in an intense feud since the spring of this year, with Bully Ray throwing Haskins through multiple tables, attacking him from behind or when he’s been down and out, and after matches. Bully Ray even laid a beat down on Haskins in front of his wife during one event. While Haskins recognizes this may be the standard shenanigans for a guy like Bully Ray, given his hardcore pedigree, he is more than ready for retribution, and plans to dish some out at the Final Battle event on Friday in Baltimore, where the two are involved in a good old-fashioned Street Fight match.

“You can’t really prepare for Street Fights, it’s not like you can go to the gym and practise going through a table or something,” Haskins chuckled. “It’s one of those things where I know it’s going to be tough … I’m very excited at having a crack at him (Bully Ray) where we will both be standing face-to-face.”

While Haskins will have his hands full with Bully Ray that night, he’s also looking forward to the incredible card, which will showcase the best-of-the-best in ROH’s roster right now, and pro wrestling today.

“For example, the main event is PCO versus [ROH World champ] Rush, which promises to be one hell of a match. PCO is someone who’s had a career resurgence over the past few years. I wish I’m like him when I’m his age, because he’s a daredevil, risk-taker, and he’s yet, probably the same age as my dad. You, know, so it’s going to be super exciting to see him take on Rush, who’s been on an absolute roll since coming to ROH this past year.”

It’s not the only match he is anticipating. “Then you’ve got Bandido, who’s coming back from injury, fellow Life Blood member, teaming up with Flamita taking on Villain Enterprises’ Marty Scurll and Flip Gordon, that’s seem very exciting. Overall, the whole card seems pretty stacked … it’s going to be one hell of a show.”

Haskins’ love of pro wrestling began at the young age of nine, when his childhood best friend brought a wrestling video tape over to his house for the two of them to watch. He’s been in love with the business ever since, entering the indies circuit in 2006, and debuting in ROH in 2018, with plenty of career highlights during his tenure with the promotion.

“Winning the ROH International Cup, yeah that was one career highlight; getting to wrestle at Madison Square Garden, and being the guy to first win matches at both Wembley Arena and the MSG (outside of the WWE), is also a career highlight. I’ve had so many, I’m lucky enough to travel the globe and do what I love doing. Being able to do that in front of multiple and different audiences all over the world is a real dream come true.”

As the last ROH PPV for the year, Final Battle takes place this Friday, December 13th at the UMBC Event Center in Baltimore, and will be an estimated four-hour event, with the promotion offering the first hour for free to all its fans as a “thank you” for their support. Final Battle Hour One airs at 7 p.m. (EST) via Ring of Honor Wrestling Facebook Live, FITE TV, and all major satellite operators and cable providers. The PPV officially starts at 8 p.m., which can also be streamed via HonorClub, ROH’s VIP annual subscription service that offers fans access to live tour events, weekly television programs, PPVs, discounts, and more.