A.C.H. (AKA: Jordan Myles) took to Twitter to announce that he will no longer work for the WWE.

“As of today, I would like to officially announce that I quit f—–g WWE. I am no longer an employee,” said Myles in an angry video.

“I refuse to work for racists. I f—–g quit! F—k them! I hate that f—–g company and everything they stand for,” he continued asking people not to call him Jordan Myles as that is his “slave name”.

He ended the video by flipping off the company. 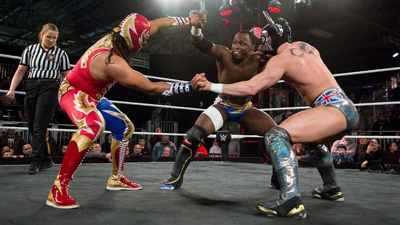 In the responses to his video, not everyone agreed with A.C.H.’s point of view.

“You’re an amazing and talented person ACH, one of the best I’ve ever seen and you’re better off without them. Good luck!,” wrote Games and Gimmicks (@gamesgmmicks).

The controversy between the WWE and Myles began over a t-shirt that was created for Myles which he and others say evoked Sambo imagery. The WWE responded by stating A.C.H. himself approved the shirt, it was redesigned and never put on sale.

In his response, A.C.H. called the WWE a “fraud” and criticized them for rehiring Hulk Hogan after his comments were brought to light.

Wrestling icon Booker T., who was inducted into the WWE Hall of Fame twice (himself and with his brother as the tag team Harlem Heat) and has won 33 championships during his time in WCW and WWE, commented on the situation.

“I don’t know where it’s going to go from here. I have been on this earth for 54 years and if you think one person is something, call them that, or if you think that person is something, call them that, but I cannot judge a group and say everybody is that. When you make a blanket statement like that you do no justice for yourself or the culture. I say this because I have had a lot of years and a lot of experience. I do know that I wouldn’t be here if it wasn’t for a white guy named Bruce Gasarch, who made this all happen for me as far as changing my life, which is another story,” said the host of the WWE’s Backstage.

“I could have easily could have judged everyone the same way after my situation of going to prison, being a kid who had never been in trouble before and for the first time being locked up in the back of a police car saying that, ‘the system did me wrong. I hate everybody of that color’, you know what I mean? If I did that, I would have done myself an injustice more than anything and I think that is the situation that I want to make clear here. The way he’s going by this, he’s doing himself an injustice,” he continued.