In the past couple of days, the Internet Wrestling Community has been engaged in a lot of debate, prompted by the clip of UFC legend Ken Shamrock falling prey to Joey Ryan”s “Dong Flip” on an IMPACT Wrestling show.

The move, which has been part of Ryan’s arsenal for the past five years, sees Ryan’s opponent latch on to Ryan’s crotch and, unable to let go, gets flipped over, ostensibly because of Ryan’s uncanny penile strength. Since he debuted the move, Ryan’s crotch has gone viral, with clips circulating of him flipping chains of opponents, up to eleven at a time, and wrestling legends, including hardcore legend Mick Foley. 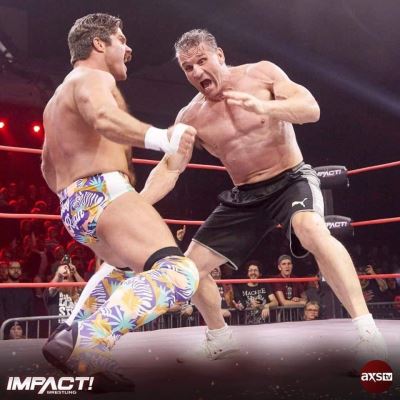 Joey Ryan and Ken Shamrock go at it on IMPACT Wrestling.

The recent outrage seems to stem from Shamrock’s legendary status as a mixed martial arts combatant. The common criticisms are two-fold: first, that it’s demeaning to Shamrock to sell such a move; and second, that it crosses too far into the “entertainment” side of “sports entertainment.”

The first criticism seems the easier to counter. Shamrock himself has gone on record, in an interview with WINCLY, and confirmed that he was fine with the spot.

“It was something that most people didn’t think would happen. So, I jumped in with both feet and it would be something fun for the fans. I even ran it by my kids to see what they thought and they were thumbs up.”

Of course, his comments may not change the minds of his fans who feel this has diminished his legacy in their eyes. But it’s clear that Shamrock isn’t going to lose any sleep over their outrage.

But that outrage does tie into the second point, and that’s whether the Dong Flip is too “over the top” for the world of professional wrestling.

Obviously, being a fan of professional wrestling requires a healthy suspension of disbelief. Even the most ardent of “purists” has to accept that what goes on in the ring is necessarily a bit of flim-flam, illusion, and trickery. Which is not to dismiss the athleticism that the performers — the athletes — display every time they participate in a match. And it’s not to say that anyone can do (or should do) what they do. But we have to accept that there is an artistic component to wrestling just like there is a sports component to it.

And, just as with any art form, what you like or dislike about it is subjective. As the oft-used analogy goes, some people like chocolate ice cream, some people like vanilla. Joey Ryan is definitely a distinct flavour of ice cream. And while some people may hate it, for others, it may be their top choice.

If his character and his move-set offends you, then the answer is easy: if you see him on TV, change the channel. Boycott the shows that he’s on. Start up a “I hate Joey Ryan” website.

But also recognize that he’s probably not going away, he’s likely going to continue using the move, and other legends will likely take the move in the future. And it won’t cause the end of professional wrestling — the business will endure.

Because, ultimately, that’s what professional wrestling is: a business.

And the true test of whether something is successful or not is, well, to steal a phrase, “that’s the bottom line.” As long as Ryan is drawing ratings, selling tickets, and moving merch, better get used to seeing the Dong Flip for some time. No matter how hard it may be to take.

Bob Kapur has been writing about professional wrestling for a couple of decades now, and this is his first use of “Dong Flip” in a story. Upset IWC snowflakes can email him their thoughts.