Suited up in plaid cut-off shirts and sporting long beards, Mathieu St. Jacques and Thomas Dubois have formed a tag team that can only be described as Quebecois. At 5-foot-10 and 6-foot-2 respectively, and a combined weight of 464 pounds, they are a force to be reckoned with.

They are know as Tabarnak De Team or “TDT” and are one of the few wrestlers from Quebec who display their culture in the squared circle. Both have a long history with wrestling and are proud to represent their province.

TDT are no strangers to big matches, and, at the time of this interview, teased a bout against an AEW tag team at Club Unity in downtown Montreal on November 8, a show promoted by International Wrestling Syndicate.

A few days later, it was announced that Private Party will be TDT’s opponent at the show, and the AEW team said they are bringing the party to Canada. “We are coming to take those tag team titles,” Private Party member Marq Quen said in a Facebook video.

Growing up, there wasn’t a big wrestling scene on the outskirts on Montreal for the two grapplers. Raised in Saint-Eustache, Quebec, about a 30-minute drive from Montreal, St. Jacques wasn’t exposed to local wrestling, as independent promotions didn’t make their way through the town. “I only knew what I saw on television,” said St. Jacques. 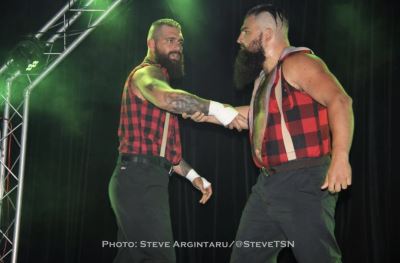 Likewise, Dubois grew up in Saint Hyacinthe, Quebec, 90 minutes east of Montreal, and didn’t get to see wrestling live. “We didn’t have cable either so my dad let me rent wrestling tapes.”

Once they got a little taste of this new world, they were hooked.

As soon as they grew into teenagers, they would find somewhere to start training. It wasn’t as easy as they thought, especially for Mathieu, who found himself training on mats in the basement of a building.

It was only later on when St. Jacques and Dubois met at Combat Revolution Wrestling in Montreal that things started happening.

They formed a tag team as sort of an accident. “We were both heels, so the owners decided to put us together. We started tagging sporadically,” St. Jacques explained. “The matches were really fun and we got along so we thought, Why not make it official?”

Although he didn’t envision himself being in a tag team, the 31-year-old Dubois said that they had chemistry. “If we hadn’t been thrown together to try this out, I don’t know that it would have happened.”

TDT has become one of the best tag teams on the independent wrestling circuit, according to IWS CEO Manny Joe. “In my 21 years of putting on IWS events, I have never seen a team with more in ring presence and chemistry than TDT,” said the promoter.

Every wrestler has their fair share of frustrations and hardships, and Tabarnak De Team is no exception. Having the expectation of getting those opportunities when they don’t come is certainly one thing this team has experienced. “We did a match for Impact Wrestling and we thought we had it made. Then nothing ever came from it. Those things are disappointing,” admitted Dubois. Their journey, however, has made it all worthwhile.

One of the more exciting parts of their job is being able to proudly represent Quebec when they grapple out of the country. “Our team name is an homage to our culture,” said St. Jacques. He explains that it was important for them to keep their last names for their in-ring personas because it reflects where they began in the industry. “Most wrestlers from Quebec have English names, so it was special for me and [Thomas] to show we are proud to be French Canadians.”

Although quite unique, TDT wasn’t the first name that came to mind. “We started shooting names to each other back and forth as a joke,” said St. Jacques. When they finally had the idea to call themselves Tabarnak De Team, they never thought it would actually stick. “We decide to give it a shot.”

Fellow Quebecers will understand the term “tabarnak” — it’s a vulgar French swear word meaning pissed off — but Dubois revealed that it’s interesting explaining to others who don’t. He said it’s worse when the ring announcer attempts to pronounce TDT as they enter the ring. “I know that they are going to butcher it, and that’s probably one of my favorite parts,” Dubois chuckled. 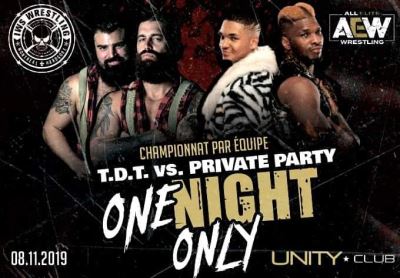 You can purchase your tickets for the November 8th event in Montreal, headlined by TDT vs Private Party, at the Ticket Leap website and check out the event on IWS’ Facebook page.

Private Party, one of the breakout teams in the short existence of AEW, will be a great challenge for the two lumberjacks. “They may at the top of their game but we are a top team in Canada. All I can say is that it’s going to be wild,” warned Dubois.

Manny Joe believes that one day TDT will make it to a top stage promotion as well. “I predict they will be signed by either AEW, IMPACT or NXT within a year,” he predicted.