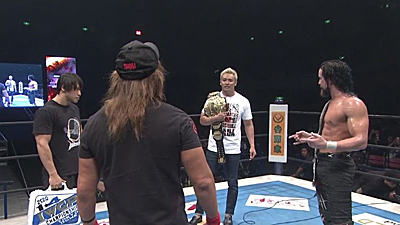 Wrestle Kingdom 2020 will be held on two nights, January 4th and January 5th at the Tokyo Dome in Tokyo, Japan.

In card stacked with title matches, Roppongi 3K won the Super Jr. Tag League 2019 tournament by defeating Suzuki-gun’s El Desperado and Yoshinobu Kanemaru in the finals at Power Struggle. Roppongi 3K made history as the only team to win the tournament three years in a row.

It was not an easy road for the dynamic, young team. Suzuki-gun attacked Sho and Yoh from behind while they were making their entrance. El Desperado slammed Sho on the rampway. As Sho remained motionless, the official started the match forcing Yoh to wrestling a handicapped match for almost 10 minutes.

Once the odds were even it didn’t take long for Roppongi 3K to put away Suzuki-gun. El Desperado fell victim to the 3K.

You would think that with the victory Roppongi 3K would be living it up but that wasn’t the case. While they were posing for pictures with the trophies they were mugged by the current IWGP Junior Heavyweight Tag Team Champions, El Phantasmo and Taiji Ishimori from Bullet Club hitting them with the title belts in the face. They then posed with the trophies before leaving the ring with them.

AEW Champion Chris Jericho sent a message to Hiroshi Tanahashi at the event after the team of Kazuchika Okada, Yoshi-Hashi lost to Kota Ibushi and Tanahashi.

As Ibushi and Tanahashi were leaving the ring, Jericho in his Sad Clown make-up appeared on the Jumbotron.

“The Painmaker versus The Ace. It is going to be a classic match. It is also going to be your last match. Sayonara!” said Jericho in his brief but powerful statement.

Tanahashi accepted Jericho’s challenge and will be wrestling him on Night Two of Wrestle Kingdom.

In another shocking appearance, Will Ospreay came face to face with the returning Hiromu Takahashi.

Following Ospreay’s match against Bushi, the message of a Time Bomb blowing up in 62 days appeared on the Jumbotron. 62 days is January 4th the first day of Wrestle Kingdom.

Hiromu Takahashi appeared throwing away his neck brace to the crowd, running down to the ring with his toy cats Daryl and Carol.

“This is what I have wanted to do with so long!” said Takahashi hurling himself into the ringside barrier.

Ospreay laid down the IWGP Junior Heavyweight Championship in the ring begging Takahashi to come for it.

“Thank you for waiting for me for so long,” said Hiromu to crowd as he came face to face with Ospreay.

Hiromu threw himself around the ring to prove he was fully healed from his broken neck which has had him on the sidelines since July 7, 2018.

“You are the strongest junior heavyweight wrestler but Hiromu is back. I challenge you at Wrestle Kingdom!” said Hiromu. Ospreay readily accepted the opportunity to fight Hiromu.

Stealing a win over challenger Hirooki Goto via the interference of Gedo and Kenta, IWGP Intercontinental Champion Jay White demanded to face the winner of the IWGP Heavyweight Championship match on January 4th between Kazuchika Okada and Kota Ibushi to a winner-take-all match on January 5th. The idea of the winners of the IWGP Intercontinental Championship and IWGP Heavyweight Championship matches meeting on Night Two of Wrestle Kingdom brought out some other interested parties.

Tetsuya Naito was first. Naito said it was about time White gave him his belt back and that holding two championships was a great idea.

Ibushi had his say next agreeing to the scenario. He demanded that Okada came out.

The IWGP Heavyweight Champion did just that.

“What the hell are you guys talking about? Everyone wants double titles? What the hell is this all about?” said Okada.

Okada polled the crowd about the idea then left the ring with Ibushi and Naito leaving White to celebrate his IWGP Intercontinental Championship victory.
…
In other matches:

Volador Jr. is dressed like the Spider-Man from the Sony/PS4 video game. TJP pins Uemura with a Detonation Kick. Here’s hoping NJPW signs TJP to a full-time contract.

A Bloody Cross from Ishimori and a CR2 from Phantasmo pins Romero. Bullet Club is not happy they are the champions and not in the finals. “It is bulls—t, Kevin! We should be in the finals!” says ELP to Kevin Kelly.

Sanada pins Sabre Jr. after a series of back and forth roll-up. Takagi and Suzuki brawl on the floor. Sabre Jr. puts an arm lock submission on the official and a Young Lion.

Sanada pins Sabre Jr. after a series of back and forth roll-up. Takagi and Suzuki brawl on the floor. Sabre Jr. puts an arm lock submission on the official and a Young Lion. Lance Archer, the IWGP United States Champion, challenges David Finlay at a title match on American soil on November 9th at New Japan Showdown.

Tanahashi pins Yoshi-Hashi with High Fly Flow. Why hasn’t Chaos fired Yoshi-Hashi yet? He needs change of some sort in NJPW. Maybe have him cost Okada the title at Wrestle Kingdom or something.

Naito removes his entrance attire on the entrance ramp rather than in the ring. The two men lock horns before the bell can even ring. Naito throws the official out of the ring as Taichi and Naito throw fists and kicks. Naito chokes out Taichi with a microphone cord and smashes his head into the announce table. Taichi runs with Naito whipping him into a steel post. Taichi super powerbombs Naito off the top rope. The official checks on stunned Naito. Taichi screams: “Is that all you’ve got?” in Naito’s face. Naito has trouble getting back to his feet and his punches seem to have no effect on Taichi. Naito just barely kicks out of an Axe Bomber and a Last Ride. Taichi no sells a Destino, popping right back up. Naito insults Taichi by hitting Black Mephisto and Destino on him to pin him.

Kenta retains by putting out Ishii’s lights with two GTS’s.

Ospreay popped out of the MX from the top rope. Ospreay retains with an Oz Cutter, Hidden Blade, Oz Cutter from the top and a Storm Breaker.

Goto had White beat with the GTR but the official was pulled out of the ring by Gedo. Katsuyori Shibata rushed down to the ring to put Gedo in his place by choking him out. Kenta arrived sending Goto to DreamLand with the GTS. Kenta hammered on Shibata. White pins Goto with the Blade Runner.

Winner: Jay White.
…
John Powell is a veteran entertainment journalist, the Editor-in-Chief and one of the founders of SLAM! Wrestling.