Fernand Fréchette was both a Scorpion and a Green Hornet

Fernand Fréchette, a former Quebec wrestler, also known for portraying the masked characters of the Green Hornets and the Scorpions, died Tuesday, September 17, 2019, at the age of 75. Here’s a look back at his life and career.

Born on December 16, 1943, in Trois-Rivières, Fernand Fréchette was a huge wrestling fan growing up. He moved to Montreal in 1954, and his godfather, a wrestling enthusiast, took him to the Montreal Forum every Wednesday. Two years later, at the age of only 13, he began to go to St. John the Baptist Recreation center to learn how to wrestle. He remained there from 1957 to 1965. In 1967, he left to go wrestle for The Great Antonio, who had his own wrestling organization at the time. But it was in 1969 that his career really took off, when he began to work for the All-Star Wrestling promotion, owned by Johnny Rougeau.

THE GREEN HORNETS, IT WAS HIM!

In the spring of 1969, Rougeau took two young wrestlers, Michel Lamarche and Alexandre Lepine, and made them the Green Hornets, two masked characters based on the famous comic book character and the popular TV show. They were known simply as Green Hornet #1 and Green Hornet #2. But the adventure lasted only one month, since Rougeau did not believe Lamarche was ready for the big leagues. He replaced Lamarche with Fréchette.

“Johnny came to see me and made me wrestle in the Green Hornet costume,” Fréchette told me when I met him in 2011. “I kept the suit for two years with Lepine.”

The other Hornets are notable too. For his part, Lamarche, who died on January 5, 2019, would go to the Maritimes and Kansas City, before returning for All-Star under the name Michel Dubois. Better known later as “Justice” Dubois, he was also successful in the United States as Alexis Smirnoff. Lepine would be known a few years later as Cowboy Jones. 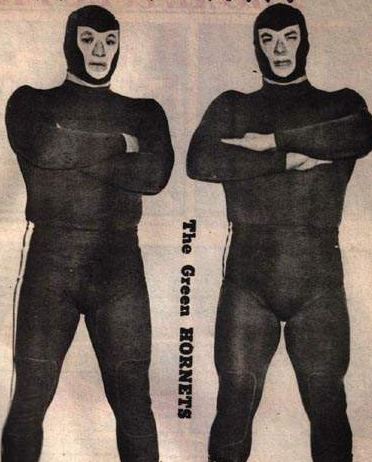 Fernand Fréchette was half of the Green Hornets.

After two years, still in the Green Hornet costume, Lepine was replaced by Len Shelley, and then, by Chin Lee.

“With Chin, we had memorable main events against Johnny and Jacques Rougeau,” Fernand recalled.

An often-forgotten figure in the history of Quebec wrestling, Fréchette worked for about three years as a Green Hornet. Often used in prelim matches, they still had the chance to work in front of large crowds, such as March 30, 1970, when more than 15,000 were crammed into the Montreal Forum to see the main attraction between Johnny Rougeau and Abdullah the Butcher. The Hornets, for their part, wrestled in a handicap match against Jos Leduc. Also, in 1970, Fréchette wrestled in Montreal against a young American who was in his first career match: Kevin Sullivan. The latter enjoyed an international career, working for the NWA, Jim Crockett Promotions and WCW, among others.

Like many of his peers, Lee and Fréchette joined the ranks of Grand Prix Wrestling in January 1972, when the territory was split in two. It was the war between All-Star and Grand Prix, a rivalry similar to the one that fans would experience years later between WWF and WCW. They were on the card when Grand Prix brought wrestling back to Ottawa on January 31, 1972, after a few years of inactivity. While Jean Ferré (André the Giant) beat Paul Vachon, the Hornets had the upper hand over Pierre Gagné and Akim Manuka in a match that went less than 13 minutes. 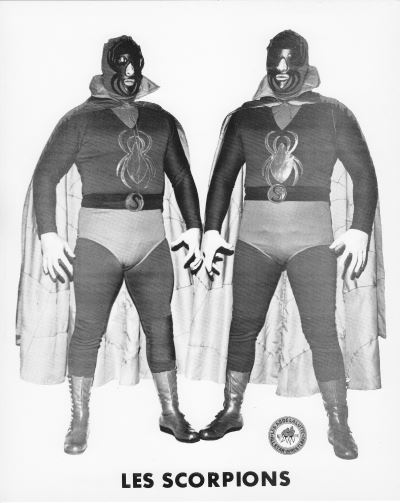 Fernand Fréchette as half of the Scorpions.

THE SCORPIONS IN ALL-STAR

They stayed more or less a year with Grand Prix before returning to All-Star.

“When we left, Johnny told us we would never work for him again. But when the time came, he welcomed us with open arms,” Fréchette recalled, laughing.

However, Rougeau believed that the Green Hornets were done as a gimmick, and wanted something new. That’s when the Scorpions, two other masked characters, dressed all in red and black, were born with a scorpion in the center and an “s” on the belt. It was a futuristic idea at the time, straight out of Fréchette’s imagination. In total, Fréchette and Lee fought together everywhere for six years, including Japan, where the Scorpions’ costumes received a good reaction from fans. Known for having the ability to have a good game with almost anyone, Lee was also very important in Fréchette’s career.

“Chin helped a lot of people, many young people; without him, I wouldn’t have passed through Japan, among other things,” Fréchette said. 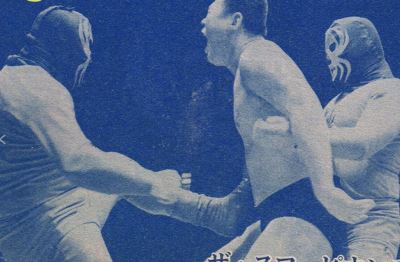 Fernand Fréchette in Japan as a Scorpion.

In 1974, when Grand Prix had lost all of its momentum, the Aces and Grand Prix presented joint events. The first in Montreal was the most successful, when Jacques Rougeau Sr. faced Don Leo Jonathan in front of 18,000 spectators. The Scorpions faced the Italians, Dino Bravo and Gino Brito.

They worked for Johnny Rougeau until All-Star folded in 1976. It was then more and more difficult to pursue a career only in the province Quebec. As a result, the Scorpions wrestled elsewhere in Canada, such as in Alberta and Saskatchewan. It was also at this time that they worked in Japan. In April and May 1976, they were part of a tour in Japan for IWE, the third-largest promotion in the country at the time, taking on the likes of Rusher Kimura, Mighty Inoue, Great Kusatsu and Animal Hamaguchi. They also returned in March and April 1978.

However, Fernand’s career would remain concentrated in Quebec. He preferred the safety of his job at the city of Montreal rather than the uncertain life of a professional wrestler. At the dawn of the new decade and now 36 years old, Fréchette saw the end of his career ahead of him. “I wrestled in the early 1980s for Lionel Provost, and then in 1983 I stopped everything,” he told me. He had no regrets.

There was a special bond between those who had been lucky enough to wrestle at the St. John the Baptist Recreation center, with its coach, Pat Girard. Despite his retirement, Fernand remained friends with several other wrestlers from that time, such as Lee, Louis Laurence, Jim Kelly, brothers Ludger and Serge Proulx, Georges Guimond, and Johnny War Eagle. The latter had also travelled extensively with Fréchette.

The last few years were a challenge for him. He was diagnosed with lung cancer two years ago, and had chemotherapy and radiotherapy treatments. Later, asthma and emphysema weakened him and a bacteria caused cavities in his lungs and caused repeated cases of pneumonia and bronchitis. A week before his death, he was admitted to the comfort care of the Pierre-Boucher hospital in Longueuil, Quebec. His condition deteriorated very quickly, faster than the family thought. Strangely, he was in the hospital at the same time as another former Quebec wrestler, Lionel Robert, who suffered from a stroke in recent weeks. However, Robert’s situation has improved since then.

Fernand Fréchette is survived by his wife of 54 years, Jeannine, as well as their only daughter, Manon. Many local wrestling personalities came to his funeral on Sunday, October 6, in Longueuil, such as Gino Brito, Gilles Poisson, Ludger Proulx, Pierre Gagné, and Dan Ferris. 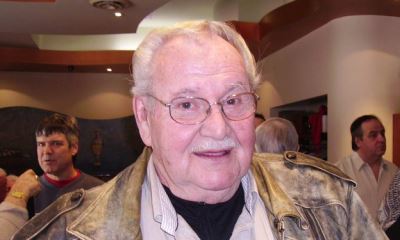 Fernand Fréchette in his later years.

On a more personal note, Fernand Fréchette was one of many who helped me a lot when I started working on Mad Dogs, Midgets and Screw Jobs, the book on the history of Quebec wrestling that I wrote with Bertrand Hébert. It was ICW promoter Ludger Proulx who told me about him first, while I was still learning about the history of wrestling in the province. He gave me his information. I contacted Fernand and he welcomed me at his house twice. He was very generous, giving me several hours of interviews and allowing me to digitize his photo and wrestling memorabilia collection. He came to our book launch in 2013, and we always kept in touch afterwards. I would often give him a call if I had a question or need to clarify information.

Life being what it is, it was a few years since we spoke when I found out he had been sick. Before it was too late, I called Fernand at the beginning of the summer. I was happy to talk to him once again. Strangely, I had the strong impression that we were saying goodbye. Yet at that time, even her daughter did not believe that her father had only a few months to live. I thanked him for all the help he had given me and told him to take care of himself. That was our last conversation. He was appreciated by his peers and I can understand why.