There was a point in time when Tommy Fierro was really the only one running pro wrestling conventions. That’s not the case today, as everyone and their mother seem to be running one in different parts of the country. But he’s still at it, with a different take on it: All ’80s, all the time. 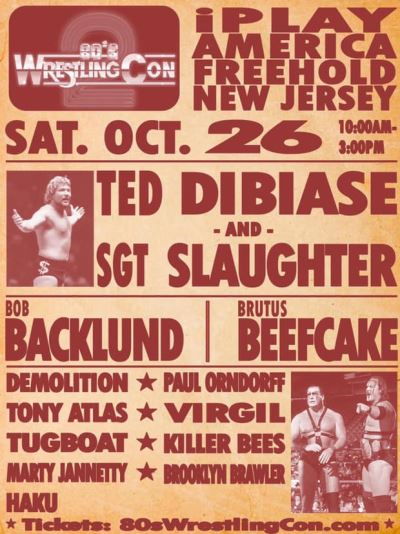 The first convention that Fierro ran, after attending some of John Arezzi’s fan fests in the early 1990s, came when he was just 16 years old in December 1993. It grew from there, with his biggest success, by far, the weekend of WrestleMania XX in New York City, when he reunited 18 stars from the first WrestleMania.

Then he got married in 2010, and his wrestling involvement waned, save a few wrestling cards that he promoted.

Online, Fierro began social media accounts on Instagram, Facebook and Twitter related to 80sWrestling. It was a way to stay connected to his love of pro wrestling. As they say, it grew from there, or, as Fierro puts it, “It blew up.” Both the Instagram and Facebook accounts have more than 100,000 followers, and Twitter is inching closer to there.

It’s not just fans either, he said. “Tons of big stars follow it too, like The Rock, Hogan, Stone Cold, Ronda Rousey, Jericho, Edge—a big list of guys,” he said.

“It got to the point where I had this online social media following and I was thinking to myself, ‘It would be stupid if I didn’t capitalize on this, do something with this following that I have.’ A light bulb went on over my head, ‘Wow, let me do an ’80s wrestling convention.’ Everyone is still doing conventions, but there never was really a theme convention, dedicated to the ’80s.”

His first took place back in April. “It was just supposed to be a one-time thing. It was real successful and a lot of people showed up to it. So, I’m like, ‘Hell, how can I stop?'”

IPlay America is a huge indoor amusement park, with rides, games, and food, so there’s a place for the rest of the non-wrestling fans to hang out while mom or dad seek out their favourites from their youth in the separate portion of the facility, more akin to a warehouse than a funhouse.

When putting together the recent conventions, Fierro stepped back from being a promoter and considered as a fan, what would he want to see?

“I tried to make it more than just a signing. I try to make it an experience, a fan festival,” he said.

So on Saturday, at 80’s Wrestle Con 2, fans are encouraged to come in costume related to 1980s pro wrestling, and “The Million Dollar Man” Ted DiBiase will host a contest, and will award the $100 prize — not revealed is what he might make the winner do to earn the dough.

There will be a question and answer session with former WWWF World champion Bob Backlund hosted by John Arezzi, a tag team Q&A panel with Demolition and the Killer Bees, ’80s wrestling trivia, ’80s wrestling karaoke, and even a Sgt. Slaughter push-up challenge.

“It’s real interactive as far as fan participation goes. I was just trying to be different than what everyone else is doing — and I think that I have,” said Fierro. ÈAt the last one we did, back in April, we did Koko B. Ware singing ‘Piledriver,’ we had Greg ‘The Hammer’ Valentine do a Figure-Four Challenge.”

Tommy Fierro, far left, with some of the 1980s stars at his first 80’s Wrestling Con.

At the previous 80’s Wrestle Con, Fierro presented Arezzi, the godfather of wrestling conventions, with a thank you plaque for pioneering it all. He vows to never run another without Arezzi — who also stepped away from pro wrestling for years and years.

Fierro reminisced about Arezzi’s old Pro Wrestling Spotlight radio show in New York City from the early 1990s, where Arezzi was able to promote the conventions.

And where Fierro memorably got to promote his: “Here’s this 16-year-old kid who doesn’t know s*** about the wrestling business, is going to steal my idea in New Jersey, the next state over, and do something to what I’m doing, and he still let me come on his radio show and promote it.

“I never forgot that, and I let him know how much I appreciate him for that, and for coming up with the idea to begin with.”