A few years ago ago, I reviewed a novel called Bodysmasher, a cheesy, pulp spy adventure story with a pro wrestling twist — including the legendary manager Captain Lou Albano as a prominent character. At the time, I couldn’t find anything good to say about the book. In hindsight, I was wrong. Because, on further reflection, it’s much better than its sequel.

Yes, during another visit to a different used bookstore, I stumbled across Death Match: Bodysmasher 2, which continued the tale of Rick “Bodysmasher” Harrison, the former soldier who was recruited by the CIA and trained as a wrestler for undercover operations. 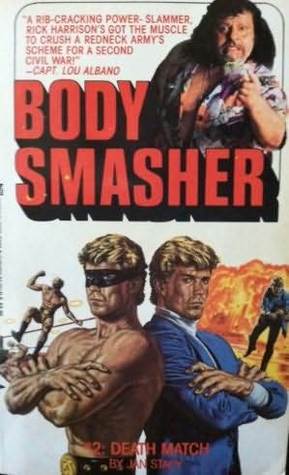 The plan is for Bodysmasher to wrestle at various state fairs in the deep south, where this group is amassing a stockpile of people and weapons, and stop them. It’s about as vague a plan as South Park‘s “Step 1: collect underpants. Step 3: profits.” But why let a smart plot line clog things up, right?

So, Harrison has a series of matches — and, mind you, in the Bodysmasher universe, all professional wrestling is a shoot, with potentially deadly outcomes. The matches are absurd, including one with one opponent who spends the whole match whipping Bodysmasher with a bullwhip, and a tag team match against the Skunk Brothers, whose costumes spray poisonous gas at their opponents.

Somehow, the hate group learns of Bodysmasher’s plan — there’s an inside mole in the government, apparently, but this flimsy plot thread (like many) isn’t ever really followed up on.

They attack Harrison and Albano on the highway, leading to a nonsensical portion of the book where Harrison has to find his way out of a jungle. Yes. A, by God, jungle, smack dab in the middle of the United States. Several pages are dedicated to Harrison’s battle with quicksand, insect swarms, a pack of wild warthogs, and even an alligator. Of course, there’s absolutely no sense that he’s in any real peril during all of this, since it happens with still a third of the book to go. But, there you go.

Eventually, they all get captured, there’s a shootout and a car chase in a junkyard, and in a bold display of lazy writing, everything is resolved through a textbook example of deus ex machina.

Oh, and did I mention the deformed inbred ogre? Picture Sloth from the Goonies but the size of Andre the Giant, and you get the idea. And Harrison also fights a tank. No, not a man built like a tank. A tank. Let that sink in.

Other dumb things, so you don’t have to waste your time reading this book:

– For a band of toothless yokels, the bad guys sure can do some creative killing. In one chapter, they skin a man alive. Later, they tie men onto the fronts of cars and play smash-up derby. It’s sad when over-the-top torture-porn scenes are the most realistic and interesting parts of the book.

– At one point, Bodysmasher meets a female wrestler, and falls in love at first sight. There are pages dedicated to describing her modified, multi-level treehouse, where she takes him after a show. Those details end up being completely inconsequential to the rest of the story, as does she. Despite how hard he falls for her, after that night, she’s never heard from again.

– Early on, as Harrison is learning about his mission, he gets training on all sorts of fancy spy gadgets that they’ve equipped him with, including a title belt that shoots knives, and heavy-artillery-laden sports car. Which he promptly forgets about. Basically, the main character is an idiot.

– And, ugh, the writing. Author Jan Stacy never came across a purple prose phrase that he didn’t love, including these nuggets:

I could go on further, but hopefully you get the point by now. If not, let me be more blunt.

In the book, the fanatical leader of the cult-like southerners goes on a rant about how books are evil, and he and his cronies build a huge bonfire where they burn hundreds of works of classic literature. Certainly, a heinous act by any measure. Well, Bodysmasher 2: Death Match is so bad that if every copy of it were on the pile, I’d be out there with marshmallows and a stick.