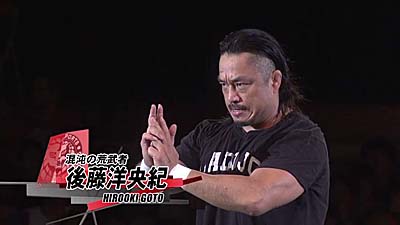 It will either be Hirooki Goto, Jay White, Jon Moxley or Tetsuya Naito who will be your G1 Climax B Block winner this year.

All four superstars are tied with 10 points each following last night’s tournament action.

Jon Moxley, who had been undefeated for most of the tournament, lost his third match in a row. Hirooki Goto took all the punishment Moxley could dispense including being thrown into the ringside barriers. Goto was victorious over Moxley with a GTR.

The finalist of B Block will be decided on Sunday while A Block will be settled on Saturday ushering in the finals on Monday, August 12th. The winner of the G1 Climax 29 tournament will win a spot in the main event of Wrestle Kingdom.

Sneaky Style wins again. Yano ties Taichi up in the ring apron. Taichi was counted out.

It took two Destinos to pin for Naito to pin Cobb.

Robinson is slammed on steel chair. White also smashes his knee with the chair. Robinson submits to White.