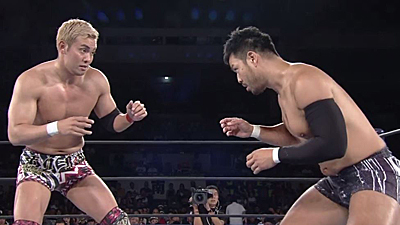 There is a tie no more. IWGP Heavyweight Champion Kazuchika Okada has defeated Kenta for the top spot in A Block.

In their main event match which was rather disappointing and sluggish considering those involved, Okada took everything Kenta had to throw at him and still came out on top.

As soon as the bell rang the Aichi crowd was solidly behind Okada chanting his name in unison. Kenta leaned back in his corner looking slightly irritated. Okada smiled at him from across the ring.

The match was incredibly slow to start with both men feeling each other out for the longest time. Kenta finally let loose backing Okada into the ropes. While Okada just slapped his chest breaking clean, Kenta slapped Okada in the face. The match degenerated into a forearm slugfest which saw Kenta collapse into the ropes. Kenta caught Okada in the ropes laying in some stinging kicks and a flying knee to the back of the head from the second rope. Kenta damaged the neck even more leaping off the apron burying a knee in Okada’s neck then throwing him into the steel post.

Okada took strike after strike demanding more kicks to his exposed chest. Okada finally stood up face to face with Kenta firing back the best that he could in what was turning out to be a very methodical match.

Okada booted Kenta over the barricade only to be draped across the barrier and suffer a running double stomp off the apron from Kenta. Kenta celebrated inside the ring nailing Okada with drop kick after drop kick stunning the champ. Okada rallied back with a shotgun drop kick of his own.

An Okada drop kick foiled Kenta’s running kick and an attempt at Go to Sleep became a Tombstone Piledriver when Okada was done. A Rainmaker Clothesline gave Okada the A Block lead.

Archer brilliantly stopped a Kamigoye with one of his own. Archer shook off another Kamigoye and a Bomaye. A second Kamigoye finally pinned Archer.

Will Ospreay Versus Bad Luck Fale

Chase Owens and Gedo double-teamed Ospreay before the bell rang. Ospreay fought them off though. Gedo continued to interfere whacking Ospreay with his kendo stick. Fale throws Ospreay into the official. Fale hits the Grenade but there is no official to count. Ospreay had Fale beat with the OsCutter but Owens yanks the official out of the ring. Owens hits Ospreay with a kendo stick and a Package Piledriver. Red Shoes takes the official’s place. He counts two then gives Fale a double Steve Austin salute and disqualifies him.

The Most Electrifying Superstar in the world today loses to Everything is Evil.

Tanahashi gets the win with Aces High and a High Fly Flow.

Tomohiro Ishii and Toru Yano beat Chaos (Yoshi-Hashi, Hirooki Goto). Yano punched Yoshi-Hashi in that “sensitive area” below, rolling him up for the win.

Los Ingobernables de Japón (Shingo Takagi and Tetsuya Naito) defeated Shota Umino and Jon Moxley). Shingo put Umino away with the Pumping Bomber. Moxley and Naito mixed it up. Moxley swung a chair at Naito. Naito rolled out of the way mocking Moxley with his traditional taunt. “You think that is funny?” asked Moxley. Naito spat at him.