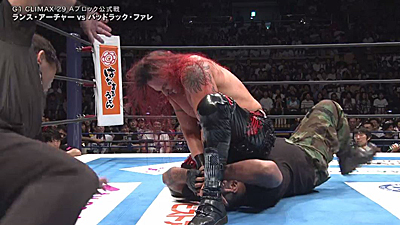 After their second night of A Block competition Lance Archer, Kenta and Kazuchika Okada are tied at the top of the division, each having won two matches in a row.

In a battle of the big men, Fale kicked out of a chokeslam leaving Archer and the crowd completely shocked. Archer had to resort to his new finishing move – the EVD (Everybody Dies) Claw – to pin Fale.

It was a real clash of Japanese wrestling styles when Kenta and Hiroshi Tanahashi clashed in tonight’s main event. Kenta opened things up with a hard slap to the face which sparked some boos from the crowd. Tanahashi slapped him back as they engaged in a slugfest.

As Tanahashi played air guitar after slamming Kenta and dropping an elbow smash on him, Kenta no sold it kicking Tanahashi in the head. The crowd didn’t like that at all. The battle went to the floor where Kenta DDT’ed Tanahashi on the concrete floor and slammed head-first into a steel post.

In a clear message to the NJPW locker room that this is the Kenta of old not Hideo Itami, sent Tanahashi to Dreamland with a running knee strike and his Go to Sleep finisher.

Will Ospreay versus Sanada

Sanada has his OsCutter blocked. Ospreay got the pinfall with his own OsCutter and Storm Breaker.

Mr. Excitement was no match for the Rainmaker who fought through the submission nonsense. Okada struggled out of an Octopus, landed a Spinning Rainmaker and a Rainmaker to defeat The Most Electrifying Superstar in wrestling today.

Evil counters the Kamigoye with a clothesline, Darkness Falls and Everything is Evil for a convincing win.

Ren Narita and Jeff Cobb beat Shota Umino and Jon Moxley. Cobb pinned Umino with Tour of the Islands. Moxley came back into the ring, got into Cobb’s face and helped Umino from the ring.