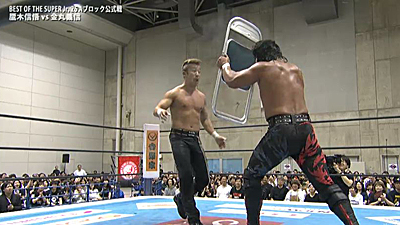 The Bone Soldier of Bullet Club and The Dragon of Los Ingobernables de Japan retained their perfect records on Night Five of the Best of the Super Juniors. With six points each now, Taiji Ishimori and Shingo Takagi are tied for first place in A Block neither having lost a match thus far.

Taichi joined the commentary team earlier in the evening apparently with the intention of helping out his stablemate Yoshinobu Kanemaru in the main event, much to nobody’s surprise. Having injured his knee with a steel chair on Thursday night, Kanemaru spent most the match working on that knee. His most damaging attack was when he drove it through a ringside table. Takagi almost didn’t make the 20 count back into the ring.

Near the end of the match, Taichi left the announce table while Kanemaru clocked Red Shoes knocking him out of the ring. Kanemaru hit Takagi twice in the knee with the steel chair. Red Shoes raced back into the ring tearing the chair out of Kanemaru’s hands. Kanemaru shoved him to the mat. Kanemaru took a big swig of his whiskey and blew it at Takagi. Takagi blocked it with a steel chair hitting Kanemaru with a Pumping Bomber.

As the Young Lions held Taichi outside of the ring, Takagi took a drink from Kanemaru’s bottle, spit whiskey in his face and pinned him with Last of the Dragon.

It was a civil war of sorts when Bullet Club’s Gedo and El Phantasmo took on Bullet Club’s Jado and Robbie Eagles. You would think the teammates would pull some shenanigans to avoid doing battle and they did but that only lasted so long.

Jado and Gedo tried to sneak attack each other before the match.

“I saw that you sneaky bastard!” said Phantasmo to Jado.

Phantasmo and Eagles go to punch each other but instead they Too Sweet each other.

The crowd cheers as legendary tag team Jado and Gedo enter the match. Each offers to shake the other’s hand. For some reason though they don’t trust each other.

Phantasmo and Gedo get nasty hanging Eagles on the Tree of Woe and standing on his crotch.

While Eagles distracts the official, Jado reaches for his kendo stick outside the ring. He cannot find it and that is because Gedo has already taken it. Gedo taunts Jado with the kendo stick. Phantasmo rolls up Jado for the three count.

Sho gets his first win by giving Taka the Shock Arrow after a back-and-forth match.

Scurll puts Tiger Mask’s fingers in the turnbuckle tie rods and cranks away with a wrench handed to him by Brody Clay. Tiger Mask gets his revenge as he ducks and Scurll punches the steel post. Scurll gets his second win with Black Plague.

Dragon Lee keeps Gresham at two points with a win.

Suzuki-gun (Taichi and Douki) defeated Yota Tsuji and Bandido. Tsuji submitted to the Stretch Plumb. Douki ripped off Bandido’s mask and left with it.

Juice Robinson, Ren Narita and Will Ospreay beat Shota Umino, Rocky Romero and Yoh. Pestered by that mysterious video, Robinson is all business as he makes Umino submit.