Best of the Super Jrs. Night Six: Canadian El Phantasmo tied at the top of B Block 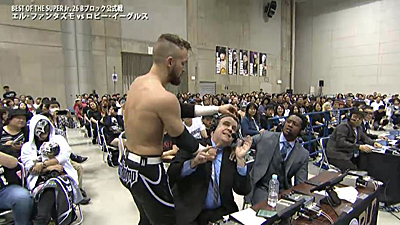 Canadian El Phantasmo, Ryusuke Taguchi and Will Ospreay all sit at the top of B Block after Night Six of the Best of the Super Jrs. tournament. Each has a perfect record thus far with three matches won and six points for those matches.

The British Columbia native El Phantasmo had to battle his Bullet Club stablemate Robbie Eagles to earn another two points.

On the way to the ring, Phantasmo stopped to break a child’s replica belt in the audience as Robbie Eagles looked on from the ring.

Both men were slow to start off. They Too Sweeted each other before getting down to business.

Although Eagles gave him a clean break in the ropes, Phantasmo doesn’t do the same for Eagles. He slapped him in the face. A ticked off Eagles shoved Phatantasmo down to the mat.

El Phantasmo apologized. Eagles helped him to his feet but instead of Too Sweeting Eagles, Phantasmo kicked him in the stomach. Eagles walked the ropes flipping Phantasmo over time and time again. Phantasmo ducked out of the ring.

In anger, Phantasmo went after the announce team. He smacked away Caprice Coleman’s water bottle and grabbed Kevin Kelly by the throat.

“You match isn’t with him. It is with me! Kevin is not a wrestler!” shouted Eagles breaking things up.

“It is you and me. Let’s get back in there and do this thing,” pleaded Eagles.

“I overreacted. I am sorry. Let’s wrestle,” said Phantasmo pointing to the ring.

When his back was turned Phantasmo shoved Eagles into a steel post and laid in some punches.

Back in the ring, Phantasmo put the boots to Eagles in a corner and laid in a series of chops. Eagles fought back with his own chops. Two moonsaults off the ropes and Phantasmo gets a two count.

Phantasmo took home the win by reversing the Turbo Backpack, pulling Eagles’ bandana over his eyes and pinning him with the CR2 (Canadian Revolution 2).

Romero wins with the Rewind Kick and an arm-bar submission.

Bandido teaches his one-time student a lesson with the 24 Plex. It is Bandido’s first win of the tournament.

Will Ospreay Versus Yoh

Yoh gets caught in a One-Man Spanish Fly which sets up Storm Breaker.

Bushi kicks out of Dodon but gets caught in the ankle lock. Bushi submits.

Juice Robinson, Tiger Mask defeated Toa Henare and Dragon Lee. As per the trend in the tournament, Robinson once again pins Henare with Pulp Friction. Juice tries to leave the ring before the mysterious video plays. It begins as he is heading to the locker room. Juice pauses and then continues to the back shaking his head.