In their mid-twenties, young adults are enrolled in post-secondary education and pursuing their degree of choice. Some may have a sports scholarship and are looking to turn professional one day. Not many 22-year-olds, however, live a double life as an executive producer in a major wrestling company.

Although this grew into her passion, de la Renta had never even watched wrestling as a kid. “I know that most people who had cable watched WWE, but the majority of the people aren’t rich or even middle class so keeping up with sports wasn’t always an option,” she said in an interview with SLAM! Wrestling.

Her introduction to wrestling came in an unexpected way, to say the least.

In 2014, the young Puerto Rican left home to study film in Florida. “One of my film assignments was to study reality television,” she continued, “and I came across the show Total Divas.” 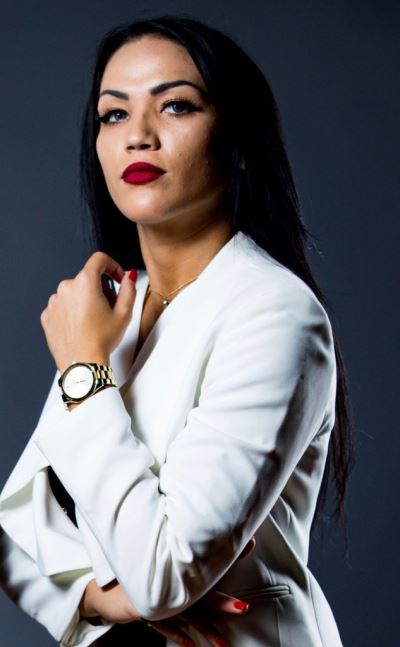 de la Renta didn’t known that women could fight for a living and was instantly curious to learn more. “There was scene in the very first episode when someone told Nikki [Bella], ‘You’re one of the top athletes in the world,’ and I said to myself, ‘Man, I want to say that to myself one day.'”

She knew this was a world she could fit into. “Within a week I joined a wrestling school and chased my career.” As she sat by the pool doing this phone interview, The Empresaria revealed that she didn’t play sports growing up, as she always found herself on the bench.

Wrestling, on the other hand, started to become second nature to her. “I started picking it up really fast and I never felt so good at anything. I really think I am built for this,” said de la Renta as she reminisced about her early beginnings, excitement in her voice.

The Latina began her career training under Mister Saint Laurent and he saw that she had special talent that would take her as far as she wanted.

Another prominent wrestling impresario also took notice of de la Renta’s potential. MLW CEO Court Bauer said that she has talent in every aspect of the business, something you don’t come across everyday. “Salina is a once-in-a-generation star. She’s exceptionally talented and ambitious and has incredible instincts in front of and behind the camera. The combination will ensure her star shines bright for years to come in the sport,” Bauer explained.

de la Renta now works with MLW where she showcases the best lucha libre talent there is.

Make no mistake, de la Renta does not consider herself a manager (though she was a supervisor at McDonald’s at one point in her life).

“I don’t stand in the corner and shout what I want wrestlers to do and how I want them to do it,” she said firmly. She explained that she has recently been referred to as a manager, which brought out that heated personality that she is known for. “I stand with them. Once they are out there it’s all them showing everyone what they can do.”

de la Renta brings a new meaning to a “fiery Latina” and because of this, she intimidates most people she meets, including men. “It’s really the face I was given, it’s not my personality,” she laughed in a way only another woman could understand.

This has also transcended into her personal life. “Every time I walk into a room no one talks to me, I don’t get asked out regularly like other women and people usually try and find a different approach than a face-to-face talk with me.” She didn’t sound disappointed when she said this.

But this will never stop her from chasing her dreams, whether it’s her Dramatic Arts degree or in the ring.

The Empresaria has broken other boundaries and was the first-ever Spanish female commentator in the United States. Surprisingly, when she initially got the job, she wasn’t aware that she would be put in that role. “It was more like, ‘Hey Salina, do you think you would be able to do play-by-play commentary?’ Of course, I couldn’t say no,” she said.

When she found out about this historic moment, de la Renta turned back into a little girl. “I was so proud of myself and I called my mom, my dad, everybody.”

Bauer is proud of this young powerhouse. The sky’s the limit for her, he vowed. “She put in the work, remained hungry and exceeded all expectations. Fast forward two years later and she now works behind the scenes, is the first Latina to produce professional wrestling in North America on national television, the first Latina to do commentary in prime time and the central focus of MLW. Just imagine where Salina de la Renta will be in another two years?”

Veteran Mike Bucci, who wrestled as Nova and Simon Dean, is a fan. “Court Bauer has white gold on his hands with Salina De La Renta. She is one of the best pure heels in wrestling. Male or female,” he posted to Facebook.

Only time will tell where she will be down the road, but we know where she’ll be in a few days. MLW will be invading Wisconsin for its Fury Road PPV at Waukesha County Expo Center on June 1. The event features Austin Aries, Low Ki, Ricky Martinez and of course, Salina de la Renta.

While she doesn’t have any set goals, de la Renta does want to make a statement in the world of wrestling. “I want to be the face or spokesperson for all the minority groups out there.”

“I want to speak for those who don’t really have a platform and this is definitely my platform.”