Ambrose, presented Hawk with the award on his last night as a WWE employee — his social media switched to Jon Moxley at midnight ET — said he began training with Hawk at 16 years old at Heartland Wrestling Association in Ohio and Hawk always treated him with respect and took him seriously.

Hawk said the CAC honor, which has only been issued three times, is “super humbling” and “just a little bit overwhelming.”

Hawk “did plenty of jobs” for WWE and WCW — specifically noting his work as a druid and a “rosebud,” and wrestled in 3,500 matches nationwide.

“I was a guy with a dream and a love. A guy with a passion and drive,” Hawk said. His journey started 23 years ago under Les Thatcher at HWA and “just sort of happened” to become a trainer after setting out to wrestle. When HWA was part of then-World Wrestling Federation’s developmental system, Thatcher had Hawk work with non-contracted talent, learning from the likes of Dean Malenko and Raven. In 2003, Hawk bought out Thatcher and from 2003-07, HWA was broadcast on the America One network in more than 100 cities throughout the United States. Hawk’s trainees include Eli Drake and Ambrose, among others. The CAC award recipient still actively wrestles and trains in Cincinnati, Ohio. 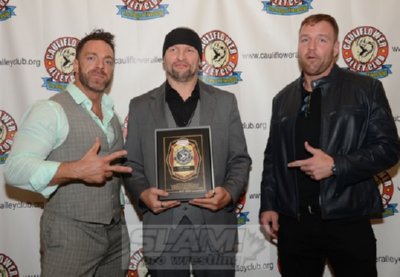 The Bockwinkel Baloney Blowout, at Las Vegas’ Gold Coast Hotel & Casino, was the first of two nights of awards as a part of the 54th Cauliflower Alley Club reunion. More than 500 people from all walks of pro wrestling life were in attendance, from current stars like Harry Smith/British Bulldog Jr. of New Japan Pro Wrestling and MLW, and free agents Ambrose/Moxley, and Drake/Shawn Ricker, to the 89-year-old David Cantu, who wrestled under a mask after serving in the Second World War. The evening was hosted by JJ Dillon with an assist from SLAM! Wrestling Producer Greg Oliver.

Scrappy McGowan earned this year’s Charlie Smith Referee Award, thanking Morgan Dollar for its creation. Simmons said his referee career began in Albany, Ga., when a referee was late and McGowan, whose father worked in the office, was asked to fill in. He refereed his first match donning a white T-shirt, bell bottom blue jeans and tennis shoes.Jeff Walton became the inaugural recipient of CAC’s promoter award. Walton began his career writing for several wrestling newsletters and magazines, then began doing publicity for the L.A.-based promotion in 1969. He ultimately became a part of the booking office and in 2004, chronicled his career in his book, Richmond 9-5171, referring to the phone number fans were encouraged to call.

“There are a lot of young wrestlers here in the audience, striving to be the top, the best… [But there’s also] so much else in wrestling,” Walton said. “I started as a fan, took coats and jackets of the wrestlers. Carried wrestlers to the back when they were injured. I set up rings, I did everything there is in wrestling to do.”

That is to say that Walton encouraged those wrestlers also to not be discouraged if there comes a time when they can no longer wrestler.

“There are other facets of [the business] that you should challenge yourself to do,” Walton said.

The James C. Melby Historian Award went to Mike Rodgers, who started his career writing about wrestling in with a three-page newsletter called Ring Around the Northwest that he sold for 50 cents. Rodgers said he was “honored and so humbled” by the honor.

“We want to remember everything that we appreciate,” Rodgers said. “We want it to be remembered so the next generation… they don’t have to start over. I like to say it’s a puzzle that will never be finished, but we’ve got the outline.”

Tony Vellano received the Art Abrams Lifetime Achievement Award, and was introduced by James J. Dillon. Vellano, the man behind the original Pro Wrestling Hall of Fame, said that he worked with George “The Animal” Steele to establish the brick-and-mortar museum for the industry. Vellano relayed a story of how Killer Kowalski said, in the early stages of the inaugural museum, that despite how many times he has sold out Madison Square Garden, he can walk by it and nobody knows who he is. But with the museum, Vellano said, that Kowalski said future generations will know who he is.

“The hall is something like that because these people appreciate it,” Vellano said. “They put their heart and soul [into it].”

Larry Matysik, the voice of Wrestling at the Chase, received the posthumous award. St. Louis area wrestling promoter Herb Simmons presented the award to Matysik’s widow, Pat. Simmons, who has known Larry Matysik for 50 years, said the announcer and broadcaster was a household name. Matysik died in November after years of health complications, but Simmons said that up until the week prior to his death, he was putting together match finishes for an upcoming show. “The outpour of support for somebody who was never a wrestler or worker in the ring was just overwhelming,” Simmons said.

Pat said her husband helped a lot of people because he “felt like he was one of them.”