A slow start to The Road to Wrestling Dontaku 2019 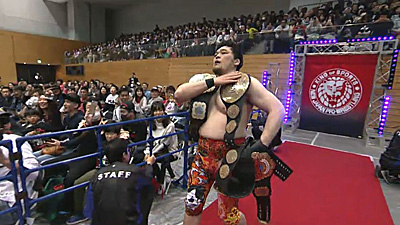 The first lead-up card to May’s two night NJPW Wrestling Dontaku 2019 event featured decent wrestling but not much else.

One of nine events meant to push the upcoming Dontaku show, tonight’s card was mostly devoid of any big angles or intriguing happenings.

At the end of Tomoaki Honma, Toru Yano and Togi Makabe’s tag team match with Bullet Club, Yano lived up to his nickname as the “Sublime Master Thief” by running off with all of Bullet Club’s championship belts as Bullet Club stared with disbelief from the ring.

Zack Sabre Jr. delivered a message to Kota Ibushi, the current IWGP Intercontinental Champion, by giving him a Michinoku Driver after their tag team match while Taichi battered Jyushin Thunder Liger and Yoshi-Hashi with his microphone stand.

During the first night of Wrestling Dontaku 2019 on May 3rd, Jeff Cobb will put up the Never Openweight Championship against Taichi and Dragon Lee, the current IWGP Junior Heavyweight Champion, will defend the title against Taji Ishimori.

Night two on May 4th will be headlined by IWGP Heavweight Champion Kazuchika Okada defending the championship against Sanada.