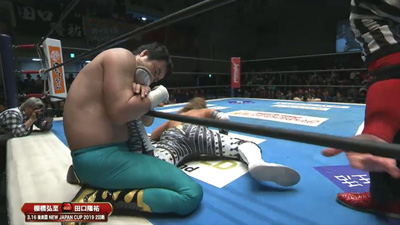 Another New Japan Cup Quarterfinal match has been set. Hiroshi Tanahashi will be taking on the dazzling Zack Sabre Jr.

On Night Seven, Tanahashi defeated Ryusuke Taguchi in a match billed as the Ace versus the Ass and in a shocker of sorts, Kota Ibushi lost to Zack Sabre Jr.

Taguchi relied on his ankle lock; however, Tanahashi had an escape plan each and every time. Everything went downhill for Taguchi when Tanahashi hit two Slingblades and a Dragon Suplex to advance.

The most entertaining man in pro-wrestling today, Zack Sabre Jr., surprised Ibushi by reversing a Kamigoye into one of his electrifying submission moves to take the next step in the tournament.

Mikey Nicholls, Michael Elgin and Juice Robinson defeated Bullet Club (Hikuleo, Chase Owens and Bad Luck Fale). Many fans were cheering for Mikey Nicholls. He is really getting over in New Japan. Nicholls pinned Hikuleo with the Mikey Bomb. Owens attacked Robinson again super kicking him into Dream Land. “You better watch your back, Juice!” said Owens before walking away.