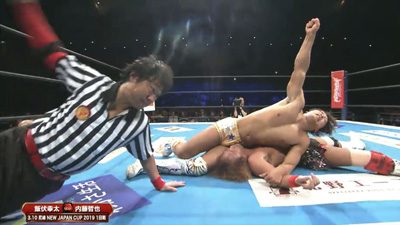 Kota Ibushi made a triumphant return to the square circle by defeating the leader of Los Ingobernables de Japón and current IWGP Intercontinental Champion, Tetsuya Naito, in their New Japan Cup match-up.

Back in January, Ibushi was injured at Wrestle Kingdom. He suffered a concussion in his match against Will Ospreay.

In one of the best matches so far this year, things got out of hand as Naito and Ibushi hammered on each other with palm strike after palm strike. Naito punished Ibushi though with a Tombstone Piledriver on the ring apron and then Gloria back inside the ring. Ibushi avoided a Destino by turning Naito around into a reverse package piledriver.

Naito clobbered Ibushi with a DDT, however, Ibushi countered with a running clothesline. Red Shoes slapped a two count after Ibushi gave Naito a Last Ride. Ibushi kicked out of a Destino, blocked another with a high kick to the head. Naito kicked out of a Bomaye.

An Ibushi Driller and Kamigoye ended Naito’s run in the tournament.

Ibushi will face Zack Sabre Jr. in Round Two.