Just 24 hours before WWE Fastlane, WWE Live made a pit stop on the Road to Wrestlemania in Detroit, Michigan. Headlined by a blockbuster main event – AJ Styles vs Randy Orton – the Motown crowd was treated to an exciting Smackdown Live house show event. They ran wild for fan-favorites like The New Day, and Rey Mysterio, and despised WWE Champion Daniel Bryan the most. While Little Caesar’s Arena in Detroit was less than packed, the audience’s energy made up for the empty space. Here are my top five moments from attending Saturday night’s event. 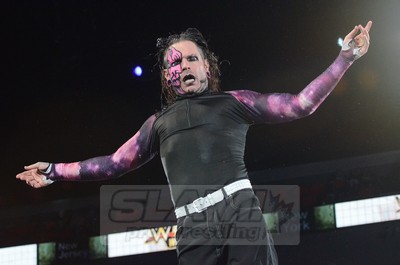 Samoa Joe retains the US Title against Jeff Hardy

The “Charismatic Enigma” Jeff Hardy made the introductory entrance to the very eager crowd. He’s followed by the brand new United States champion, Samoa Joe, who the crowd was unanimously against in this match. Hardy picked up some steam with a Whisper in the Wind, and attempted to hit the Twist of Fate, but was countered by Samoa Joe’s Coquina Clutch. The referee picked up Hardy’s arm three times, and declared Samoa Joe the winner. 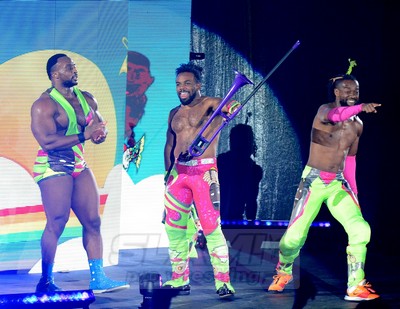 Detroit always rises to their feet when they hear the cries of Big E and the New Day over the speakers. This time was no different, as the three men pranced to the ring, throwing their famous pancakes into the crowd. They danced to their opponents entrance themes — Shinsuke Nakamura/Rusev and The Bar — and threw pancakes at them as well! During the match, they performed their usual gags while hitting The Midnight Hour on Nakamura for the victory. They proved that they were still atop of the WWE tag division. 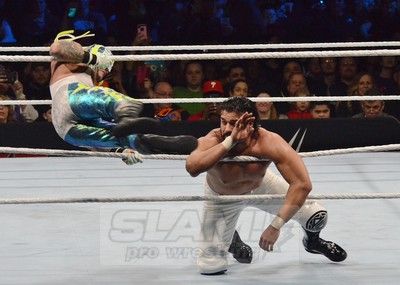 Rey Mysterio hits the 619 on Andrade.

The rivalry between Rey Mysterio and Andrade continued during WWE Live. Andrade refused to do battle for the first handful of minutes while mocking the crowd as well. He and his manager, Zelina Vega, definitely upset the audience. Mysterio eventually caught Andrade with his incredible lucha style, and both men had some impressive offense in the match. It all came to an end when Zelina Vega was thrown out for interfering, and Mysterio capitalized by hitting his patented 619 for the win. 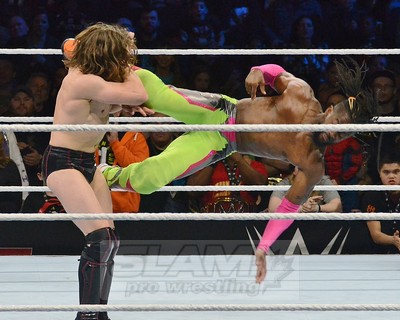 WWE Champion Daniel Bryan was easily the most hated man in the building. While making his entrance alongside his eco-friendly bodyguard, Rowan, he stood on the top rope for almost two minutes, soaking in the jeers. He then proceeded to take the microphone and call the Detroit crowd “idiots.” His challenger for the belt, Mustafa Ali, returned the favor and call Bryan the idiot. “You’re an idiot!” chants were directed at Bryan for the majority of the match. Ali seemed to be in for the win until Rowan knocked him off the top rope for a DQ. Kofi Kingston came running down to save Ali, and the crowd erupted. KofiMania was definitely running wild in Little Caesar’s Arena. 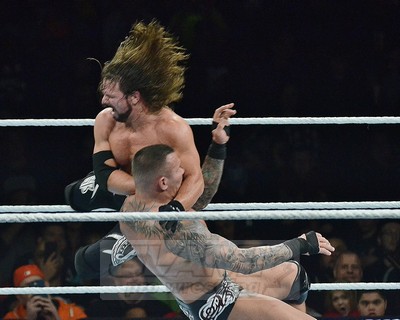 Two of WWE’s biggest stars squared off in the night’s main event. Randy Orton and AJ Styles faced off in what was definitely a big fight feel, as the veterans split the crowd in half. While the bout definitely started slow, the crowd was still loud and invested, as they cheered for the side that they were on. Randy Orton went for many RKO attempts, and AJ Styles almost tapped Orton out with the Calf Crusher. This was an “edge of your seat” type of match because you truly couldn’t tell who would prevail. AJ Styles though, was able to hit the Phenomenal Forearm and score the victory to close out the night. 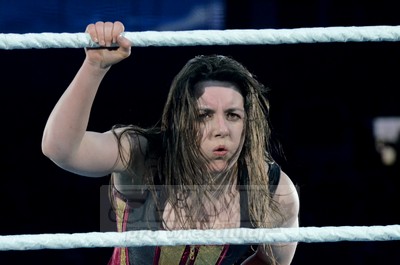 – Samoa Joe submits Jeff Hardy to retain the United States Championship with the Coquina Clutch
– Nikki Cross defeats Sonya Deville with a swinging neckbreaker
– The New Day (Xavier Woods and Big E) defeat Rusev and Shinsuke Nakamura and The Bar by performing the “Midnight Hour” on Nakamura
– Rey Mysterio defeats Andrade with the 619 and big splash
– Mustafa Ali vs Daniel Bryan ends in a no-contest when Rowan interferes. Kofi Kingston comes out to help Ali 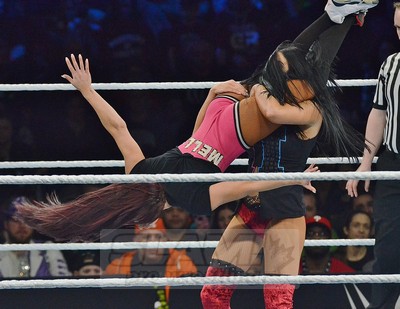 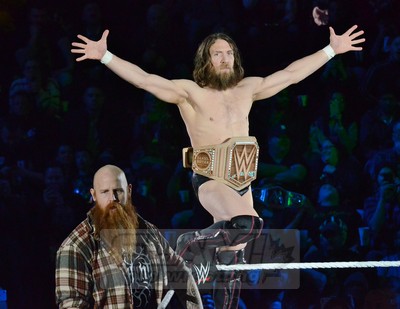