When I was growing up my mother hated pro wrestling. She despised it so much that she would occasionally raid my room throwing out any issues of Pro Wrestling Illustrated, Sports Review Wrestling, Inside Wrestling or any copies of WWF Magazine she could find.

One thing she never touched though was my copy of Wrestling’s Greatest Grudge Matches: Battle and Feuds by Bert Randolph Sugar and George Napolitano. Perhaps because it was an actual book she never paid it any mind, ever.

As a Canadian kid my wrestling knowledge and news was sourced from any magazines, books, video tapes I could find as well as house shows at Maple Leaf Gardens and the weekly Mid-Atlantic, WWF, AWA and local wrestling shows like George Cannon’s Superstars of Wrestling every Saturday afternoon. 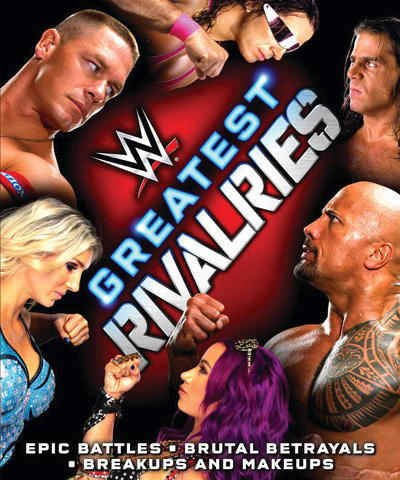 We didn’t get NWA or WCW broadcasts until TBS became available in Canada in the 1990s. One of the ways I discovered and relived many of those feuds I had missed like The Fabulous Freebirds and The Von Erichs or Bruno Sammartino versus Larry Zbyszko or Superstar Billy Graham versus Bob Backlund were through the detailed accounts I found in books like Wrestling’s Greatest Grudge Matches.

A new release from DK Books, WWE Greatest Rivalries by Jake Black, is the modern equivalent of Sugar and Napolitano’s classic tome. It has all the reverence, detailed research that makes it not only a great source of wrestling history but it is fun to read again and again. Having written comics for DC and Marvel as well as a host of wrestling books, there is nobody better than someone like Black to not only impart important information but to present it in an entertaining way.

The book is divided into Classic, Attitude and Modern eras. The Classic Era includes everything from Bruno Sammartino versus Superstar Billy Graham and Don Muraco versus Superfly Jimmy Snuka, all the way to Diesel versus Shawn Michaels. The Attitude Era is composed of Mankind versus Triple H, The Rock versus Stone Cold through to Kane versus Rob Van Dam. Edge versus Matt Hardy, John Cena versus Randy Orton and others like Charlotte Flair versus Sasha Banks make up the Modern era. Although I might quibble with putting Mickie James versus Trish Stratus or Eddie Guerrero versus Rey Mysterio in the Modern Era, the judgement calls and categorizations are right on.

Each feud in the 200-page hardcover book is given its own colourful two-page spread complete with photos, a description of the feud, its key matches, facts and figures and if the rivals had a breakup like Shawn Michaels and Marty Jannetty, a makeup like Bret and Shawn Michaels or even both like Macho Man and The Ultimate Warrior. 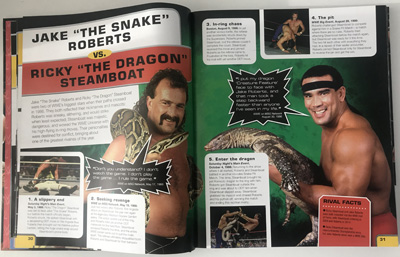 Jake Black really knows his facts. He has certainly done his homework. For example, as one of the important matches in the Jake Roberts versus Ricky Steamboat feud, he mentions and chronicles their Snake Pit match at The Big Event in Toronto or that the Hart Foundation had a chance to regain the WWE Tag Team Championships from the Nasty Boys during a match on WWE on the MSG Network.

Whether it was a pay-per-view, an episode of Wrestling Challenge, a house show or a closed circuit broadcast, Black goes back in the archives to really give you those important dates and descriptions taking you back in time to where and when it all happened.

Individual or tag team feuds are not the only rivalries listed either. There are pages devoted to ECW versus WWE, WCW versus WWE and Raw versus Smackdown. Superstars like Hulk Hogan and Chris Jericho and their storied WWE rivalries are also given their own pages.

The only thing missing from WWE’s Greatest Rivalries is a video companion which would have been an massive effort to put together but man, that would be a priceless piece of WWE history to have all those matches and all those feuds in one complete package.

WWE Greatest Rivalries is another extensive, compelling and engaging entry in Jake Black’s growing list of WWE historical digests. If you are a veteran fan like me or someone who just discovered the world of professional wrestling, WWE’s Greatest Rivalries is essential, critical reading material for its thorough gathering of the facts and as a wonderful trip down memory lane from someone who respects the wrestling industry, its performers and its fans, both young and old.