Readers who crack open author Steven Verrier’s latest book, Gene Kiniski: Canadian Wrestling Legend, expecting a tell-all on the wrestler who died in 2010 might be disappointed. Verrier has gone way beyond the expected tenets of a professional wrestling biography. This book isn’t just a guide to all things Kiniski, it would also make a suitable textbook for a wrestling history course!

Published by McFarland, the book opens with moving forewords written by Kiniski’s sons, Nick and Kelly. Verrier’s extreme dedication to detail — the book’s bibliography section consists of five pages! — is immediately evident in the Introduction, which consists of a Canadian “historical backdrop” prepping readers, Canadian and international alike, with a context of what Kiniski’s Canada looked like for him and his ancestors. The details keep coming as the chapters follow the self-proclaimed “Canada’s Greatest Athlete,” from his humble beginnings in Chipman, Alberta, to his time on the football fields and eventually the squared circle. 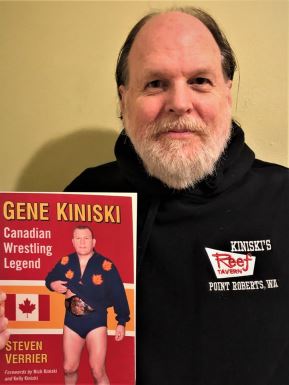 This writer must confess, that even though I am a Canadian and a wrestling fan, I didn’t know much about Kiniski before reading this book. My knowledge was limited to stories shared by my father and his brother who grew up watching him wrestle. Verrier’s commendable research and the inclusion of recollections of Kiniski’s friends, family and fellow grapplers have filled my knowledge gap. By the final page, I was well versed on the gruff and witty nature of Kiniski and finally understood why he was such a beloved heel.

The 254-page tome boasts a crisp layout with plenty of high quality pictures. Verrier was given ample access to the Kiniski family archive and he made use of this privilege including amongst the book’s photos, scrapbook-like pieces including certificates of achievements, personal correspondence and Kiniski’s obituary. These personal mementos, such as a letter from Fritz and Doris von Erich thanking Kiniski for his support after their young son died, provide the reader with a deeper understanding of the multi-faceted Kiniski.

While the writing can be dry and heavy at times, this is not a book you will be reading in one sitting, Verrier succeeds in achieving a balanced perspective on Kiniski. This is no easy feat as Kiniski is quite a dichotomy having his share of both accolades and contempt. Verrier does not shy away from the facets of Kiniski’s personality and history that are far from shiny. Included in the book is coverage on Kiniski’s wandering eye and sexist proclivities, the breakdown of Kiniski’s 20-year marriage, the subsequent suicide of his ex-wife, his penchant for not putting rising, younger wrestlers over, and his often extreme stance of tough love towards his sons.

It is clear that Gene Kiniski: Canadian Wrestling Legend was a labour of love for Verrier, who also wrote Professional Wrestling in the Pacific Northwest A History, 1883 to the Present. Readers will get a lot of bang for their buck and will learn more than they may have intended about Kiniski and professional wrestling. Verrier even goes so far as to include a chapter on each of Kiniski’s parents highlighting their own achievements and tenacity. Nothing is missing here. The book could very easily be renamed The Kiniski Bible. Verrier has astutely crafted the complete and definitive biography on Kiniski.