Coming off another great NXT TakeOver, Triple H plans to raise the bar again but this time with veteran Impact Wrestling stars.

Abyss and Sonjay Dutt have departed Impact Wrestling to take roles with the WWE — Triple H confirmed the news at a conference call after NXT TakeOver. 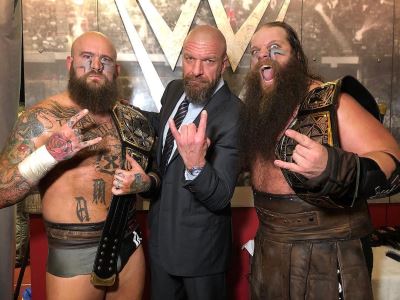 “We are always on the lookout for talented people that can contribute to the product and to the WWE as a whole. It doesn’t matter where they are from. The quality people that are talented that have a passion for this and want to go to the next level and succeed, I’m always looking for those people,” said Paul “Triple H” Levesque. “Sonjay coming in here, Abyss coming in here for behind the scenes roles. We are going to see where the best fit is for them. I’ve heard of them. I know of them. So many people speak highly of them and their jobs over the years from a talent standpoint and from another standpoint. I’m looking forward to working with them and seeing where they best fit. Everyone here will determine where they fit, what they want to do and how they can help contribute in the best way to the product going forward.”

It is the whole team effort that makes NXT great and Triple H was pleased with NXT TakeOver: Phoenix. “I thought it was an amazing show. I thought once again, the locker room of NXT continues to take it to another level and delivers something more. They raise the bar every time they go out there. I was very proud of the show tonight, very proud of them.”

NXT TakeOver was a great show even with key wrestlers not performing including Velveteen Dream and Adam Cole, though both showed up after it went after the air to confront Johnny Gargano and Tommaso Ciampa.

“You can only fit so many people into a card. There is a lot of people and you can only fit so many. That’s part of the awesome aspect of this and the variety and you aren’t seeing everybody every single time and you are not doing all that stuff,” he said. “[Velveteen Dream] had star moments in the show just in the little bit of stuff that he did. He walked out there and sat in the crowd. It’s all little steps of being a star and the one thing about Velveteen Dream is and I think everybody fails to realize that he’s been in the business for a minute, and how far he is, and how he gets this. I think you want to make sure he takes the right steps to get there in the right matter so that it all works out in the best way possible and doesn’t become too much too soon, where you put him in a position where he might not be ready for or could fail,” said Triple H.

Big stars such as Velveteen Dream and Johnny Gargano are contributing to the NXT brand, which keeps reaching new heights all the time, which Triple H could not foresee in the future. “Could I have envisioned it (NXT) going in the way it’s going and where we are right now? I couldn’t envision that. Although, the talent was there and the ability for them to be seen by the world. As you move forward how do you go about trying to top it? You hope that everything is done when you get there. You hope that the stories are there that back all this up. That’s really what it’s about is the storytelling and the characters.”