Christopher Daniels not done yet

Christopher Daniels has been making the media rounds, promoting tonight’s Ring of Honor Final Battle pay-per-view, where he is facing a “The Villain” Marty Scurll one on one for the first time ever. In the words of ROH’s publicity, Daniels is “starring down the sands of the hourglass of potentially his ROH career.” 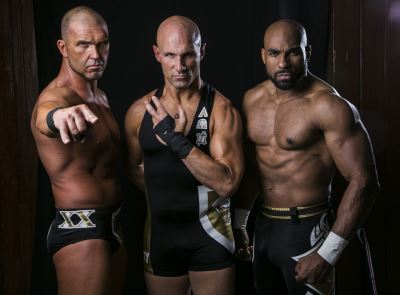 It’s a complicated storyline, with Scurll offering up a contract for a future ROH World title bout if he loses, while Daniels is under pressure, his future in the company with the SCU (SoCal Uncensored) faction, including Frankie Kazarian and Scorpio Sky, up in the air.

But in conversation with SLAM! Wrestling back when ROH came through Toronto on November 11th, Daniels was pretty optimistic about many more years to come as a full-time professional wrestler.

What is left to accomplish? Is there a deadline?

“There’s a deadline for all of us, and mine is closer than a lot of people’s. I don’t know when it is. It’s still inconceivable for me to think that I’ll have to give this up,” Daniels told SLAM! Wrestling. “But, you know, I’m 48, and I’ve got injuries and wear and tear that’s building up, so it’s closer today than it was yesterday, and tomorrow will be closer still.”

SoCal Uncensored is made up of Daniels, his long-time partner Frankie Kazarian, and Scorpio Sky — who dropped out of the wrestling business for a little while, giving his body a chance to heal.

Daniels said he never considered that, in part because he was never on the go every single day.

“I never really had the schedule that, for example, the WWE go through, that grind of five days a week, 365 days a year. I avoided that,” he said. “But still, you’ve got a set number of bumps on your card, and that number’s coming close for me, I’m sure. I don’t know if it’s a year or two years or five years, who knows? But it’s closer now than it was five years ago. That’s something that I think about every day. I wake up in the morning, depending on how I feel, and think, how much longer can I do it? There definitely is a deadline for me, I just hope it’s farther away than it might be.”

This writer first met Daniels in 1998 at the NWA 50th anniversary show in Cherry Hill, New Jersey, when he was a part of Dory Funk Jr.’s class of potential WWE trainees. Steve “Dr. Death” Williams was getting back into shape, and fellow trainees included Kurt Angle, Teddy Hart, Shawn Stasiak, Glenn Kulka, and Test.

Despite the training, Daniels never got a WWE shot; he doesn’t dwell on the “What If?” aspect. “That was never offered to me, honestly, it was never offered to me, I never had that opportunity with WWE. I think the only times that I might have been something that they might have been interested in, were times where I was firmly entrenched with TNA or firmly entrenched with Ring of Honor. That never happened, so it’s not really a ‘What If?’ it’s more like, circumstances fell a certain way, and we just never got close enough to decide to work together.”

But he does work well with Kazarian and Scorpio Sky — those two are current ROH tag champs, and defend the titles in a three-way ladder match at Final Battle — and the SCU faction has almost rejuvenated Daniels in a way.

“The stuff I’m doing now, especially with Frankie and Scorpio as SCU, I feel like there’s a lot of momentum on our side right now, in terms of popularity. So I’m trying to find ways to build that momentum in every match that I have, whether it’s a singles match, a tag match with Frankie, or a six-man tag with the both of them,” said Daniels. “We’ve got a little bit of magic here, and I’m trying to cultivate that. It’s just another facet of my career that hopefully will last a good many years.”

Decidedly a veteran in the ROH locker room — though ROH just signed the 50-year-old PCO (Carl Ouellet) — can Daniels feel the success of SCU in a way that a younger performer maybe cannot sense yet?

“Yeah, maybe. I think guys, they have to have success and they have to fail to know the difference. I’ve had stuff that has gone really well, and I’ve had stuff that flopped and died on the vine. So, I appreciate when things are going my way. I’ve had the benefit of tenure too, where even when things weren’t going 100 per cent well creatively, I feel like people respected my work and respected me enough that I wasn’t booed out of the building, I wasn’t thrown off the roster anywhere I was at. I’ve been lucky in that respect to have the fans’ respect and to have them at my back for a lot of the way.”

As for advice, getting used to the travel — going from California to New York City for Final Battle at the Manhattan Center’s Hammerstein Ballroom — for example, Daniels is willing to share. “Everybody handles it their own way. Coming from southern California, we do a lot of red-eyes, so we learn to sleep on planes. I’m really good at that. It’s not too bad. And then going home is a little easier on me because I get all my hours back.”

— with files from Don Davies