No matter what Tom Petty sang sometimes it isn’t good to be king. At ROH Global Wars at the Mattamy Athletic Centre in downtown Toronto, Kenny King came within mere moments of becoming the ROH World Champion.

In the main event of the evening, the former reality star took on champ Jay Lethal who has tried to put King back on the straight and narrow. Feeding into his new heel ways, King attacked Lethal before the bell even rang. After stunning Lethal with chops and kicks King dove over the top rope onto him. Lethal rebounded by suplexing King on the floor. King and Lethal brawled around the ring. King struck the ringside barrier hard.

After trading two counts in the ring the battle between Lethal and King went back to the floor where King let loose on Lethal bouncing him off the steel post. Both men fought on the top rope where Lethal got the better of King Superplexing him to the mat. King rolled out to the floor. Lethal speared King with three suicide dives in a row.

Lethal Jay Drilled King, however, his plan to put him away with Hail to the King was thwarted when King rolled him up for a two count. The champ hit the Lethal Injection but … King kicked out shocking Lethal and everyone in attendance.

Taken aback, Lethal reclined in the ropes for quite some time thinking of what to do next as King lay quite still.

Lethal spit at King dove onto him, peppering him with punches.

“Get up! Get up!” yelled Lethal stomping and kicking King as he got back to his feet.

King shoved the referee, kicked Lethal in the face. The official counted three while King had both feet on the ropes. The decision and victory was waved off once the referee saw the tell-tale wobble of the ropes which have ruined the plans of many a nefarious wrestler in the past. 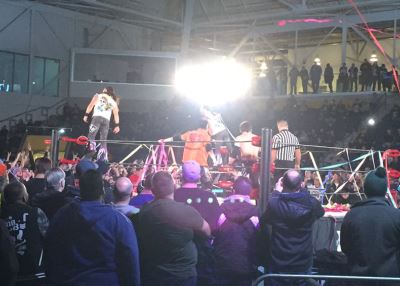 Streamers fly at the Young Bucks arrive to face Chris Sabin and Kushida.

An irate King flipped another attempted Lethal Injection into a roll up but a third put him away as Jay Lethal retained the ROH World Championship.

Lethal offered his hand to King after the match. King slapped it away and walked off.

Although one understands the custom of booking a world championship title match as the main event, tonight it probably would have better served Global Wars to book either The Briscoes versus Los Ingobernables de Japon (Evil and Sanada) or The Young Bucks versus Kushida and Chris Sabin as the main event as it was almost impossible for Lethal and King to follow up those two incredible bouts. I remember the WWE at Maple Leaf Gardens (where the Mattamy Athletic Centre now stands) when the main event of Hulk Hogan, Ultimate Warrior or Randy Savage defending the WWE World Heavyweight Championship was held before the intermission and an alternative match being the final match or main event. It is not that the match placement hurt Global Wars. It is just the flow would have been much better if King and Lethal hadn’t been the final match of the night considering all that came before it.

I would be remiss if I didn’t mention the absolute mat classic that Juice Robinson and Beretta put on with Robinson taking some very, very nasty bumps in and out of the ring including one where he missed a cannonball outside the ring, hit the ringside barrier and went right over crashing into the front row. That’s gotta hurt.

In a bout for a spot in the four corner match for the WOH Championship at Final Battle, Karen Q beat local talent Kaitlin Diemond via submission. After the match, a brawl between Q, WOH Champion Sumie Sakai, Kelly Klein and Madison Rayne broke out. Security eventually had to intervene.

Later in the evening, Diemond chatted with SLAM! Wrestling and expressed the challenge in playing the babyface, since she is usually a heel … but it is her hometown and she did get some good pops. She also said that, using ROH’s Honor Club streaming service, they all gathered around Klein’s phone after to re-live the match itself and immediate critiquing of what worked well and what could have been improved.

Bushi sprayed his mist into TK’s face. Naito pinned Marseglia with Destino. Matt Taven ran into the ring to assist in a beatdown on Los Ingobernables de Japon. Christopher Daniels evened the odds…and coincidentally the next match was …

Matt Taven defeated Christopher Daniels when TK O’Ryan and Vinny Marseglia came back down to the ring to interfere.

The Briscoes Versus Los Ingobernables de Japon (Evil and Sanada)

Mark threw a chair into the ring which distracted the official. Mark took another chair and battered Evil. Jay hit Sanada with the Jar Driller for the win. A ticked off Evil drove The Briscoes out of the ring as he smashed them with the steel chair.

Who names themselves ‘The Octopus’ for crying out loud? A spinning cutter wins Gordon the match.

After an amazing match, Robinson got the pin with Pulp Friction.

The Young Bucks Versus Kushida and Chris Sabin

Another fantastic match with Matt winning the match for the Bucks by making Sabin submit to the Sharpshooter bringing cheers from the mostly Canadian crowd.