At the end of August, Heaton was admitted to a hospital in British Columbia, and never left.

Throughout his lengthy career, Don Leo Jonathan was one of the top wrestlers in the world, period. At 6-foot-6, at usually 280-320 pounds, he was both hulking, but also fast and agile, able to do a nip-up.

Contrasting his size was his voice, which was squeaky and high-pitched, yet measured and thoughtful, menacing when it needed to be, motivating when he wanted to rally the fans to his size.

He was born on April 29, 1931 and always billed from Hurricane, Utah, but he grew up in nearby Harmony and Kanab. His father, Jonathon Delaun Heaton, entered pro wrestling in 1927, and worked as Brother Jonathan, Don Delaun and Sparrow Condelmedis. “Hurricane was a small place, and everybody who was there during my time, they would remember me, but they wouldn’t remember me as Don Leo Jonathan or Don Heaton. All they would remember would be my nickname ‘Mutsy,'” laughed Jonathan. His father gave him the nickname. “He was good at nicknaming everybody.”

At Cedar City High School and Hurricane High, Heaton excelled in track (shot put), wrestling and football, where he was a tackle, and as a part-time job, worked as a butcher. His success in wrestling wasn’t a surprise to his father, who had the family on the road often, and young Don Leo learned the amateur moves at age five at his dad’s heathatorium in Phoenix. As a child, Don Leo also appeared in a few episodes of Our Gang but not any sort of featured role; as an adult, he would appear in numerous films as well, and a 1963 TV commercial for Wheaties, Breakfast of Champions, which aired during the World Series. 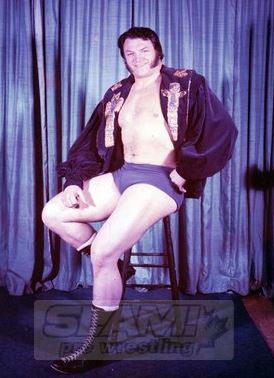 A promo photo of Don Leo Jonathan from the 1970s.

After he graduated in 1949, he had scholarship offers for college, but elected to enter the Navy Special Services, training in San Diego in deep sea diving. It would be a passion that he would keep throughout his life. In 1963, he went back to school to learn how to drive a submarine, and followed that with lessons in bell diving and deep gas diving. The result? A Vancouver-based business, Can Dive Ltd., which built and operated diving equipment, and DLJ Enterprises Ltd., a parent company to oversea many ventures.

His partner in the company, Dr. Phil Nuyten, said that some old truisms describe Jonathan best. “The thing that comes to mind is a whole string of clichés. Those clichés are strong as a bull; straight as an arrow; smart as hell; you get your money’s worth; one face for your face and the same face for your back, most unusual; and one of nature’s gentlemen; his word is his bond; and all that sort of thing. Those old clichés epitomize Leo because they are fundamental, old-time values.”

Recognizable years after he retired from pro wrestling, both because of his bulk and his then-grey muttonchops, Jonathan said that he was happy to be stopped for the memories. “Guys 50, 60 years old that I talk to, ‘Oh, I used to come and see you with my grandpa. My grandpa would take me every week to go see you. … makes you feel kind of good, especially those that say, ‘You signed my autograph when other guys wouldn’t.’ To some of the kids, that little thing that you do, you stop and give them an autograph — it’s nothing to me, but they, some of those kids remember that and they tell me about it. One of the kids told me he got my autograph 10 times and sold each one for a dollar,” he laughed. “That’s how he kept going to the wrestling matches! He’d always manage to get several autographs from me.”

Of course, for many years, young Don was one of those kids going to the matches. After getting out of the Navy, and giving up on his aspirations to compete in judo, Don’s wrestling career overlapped his father’s for a couple of years, beginning in California before moving worldwide. On a handful of occasions, he strayed from the name inherited from his dad, including El Loco in Baltimore and El Diablo in Columbus.

While he was World champion in Montreal in 1955, and held numerous other titles, Jonathan avowed that titles never meant much to him. “I always seemed to be more interested in learning as much as I could,” he told Scott Teal. “There were times I wrestled and it didn’t even occur to me that it was a title match.” To prove his longevity, Jonathan would reign again in Montreal, under the Vachon’s Grand Prix banner, in 1974. He really made an impression earlier in the territory with his “Battle of the Giants” against the newcomer to North American shores, Jean Ferré, later Andre the Giant. 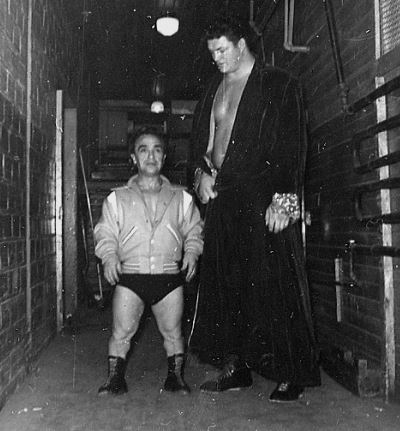 Tom Thumb and Don Leo Jonathan in London, Ontario, in the mid-1950s. Photo by Terry Dart.

Ever adventurous for travel, Jonathan would headline from New York City to Vancouver, from Tokyo to Sydney, from Cape Town, South Africa, to Berlin. “I loved the travel, I loved foreign places, I loved foreign languages. I just liked the atmosphere and it fed my ego to a great degree also. But to get that recognition, you had to do the work,” he said.

Jonathan’s stardom meant bookers would often pair him with up-and-coming stars for the rub, or create interesting Mutt and Jeff pairings, the giant and the shrimp. Consider the mayhem-causing paring of Don Leo and Gene Kiniski (champs in Toronto in 1959), or a rookie Rocky Johnson, in Vancouver in 1967, where The People’s Father listed Jonathan as his brother on a car lease. 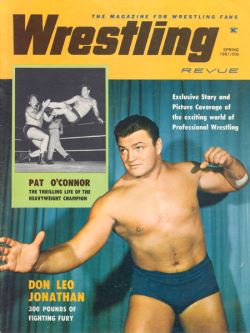 “To me, Don Leo Jonathon was probably the greatest human that ever lived,” said John Quinn, who held the tag titles in B.C. with him in 1979, and faced him countless times. His strength was only matched by his sense of humor, said Quinn. “He’d pick me up … and start to giggle. Ever hear him giggle? He’s worse than a fucking girl!”

His greatest opponent was Killer Kowalski. The two worked out a pattern. Time and time again, Jonathan would be in a territory as a bad guy, terrorizing the local heroes when something happens to put him on the right side of the law. And a great hero needs a great villain. It was often Killer Kowalski.

“He was the most athletic wrestler I ever came across. He comes up the steps, stands on the apron, hands on the rope, does a flip right over top and lands in the middle of the ring,” recalled Kowalski. “We were a tag team, all over, everywhere. And, what did I do? Quite a few times, just to make sense of a match, I double-crossed him. So called, anyway. We’d wrestle one another that way. We enjoyed it, wrestling one another. We’d go on the road, we’d be a team again and I’d do the same thing again and we’d wrestle one another here, there and everywhere. We’re acting like more than family. He was my brother, I was his brother. We wrestled like that all over the country. We’d just keep on going. We became really close as friends, very, very close, as two wrestlers rarely become.”

To Jonathan, it was never cut and dried. “A lot of the matches I had with Kowalski, we had a split fan base, some liked me and some didn’t. You really never know how the fans are going to take you, but if you’re an outsider coming in, and you’re wrestling somebody that they know, that’s been there a while, automatically they go for the guy they know.”

The Mormom Giant philosophized a little further on how fans react. “You take two guys the people don’t know, and you put them in the ring for five minutes, and the people will have made up their mind what they want. Sometimes, you just can’t do what you want to do. You just go with the flow. Why fight it?” he said, adding that you just have to feel it. “Nobody can really tell you. What you do is you watch. You pay attention and you watch. I’ve probably watched twice as many matches as I was ever in — especially when I was younger. I studied Kowalski like a book. He was the best. And if you want to be the best, you have to work with the best.”

Then there’s the brawny tale of Don Leo bodyslamming a braggadocios Haystack Calhoun, who claimed it couldn’t be done. That night, in the battle royal, Don Leo instructed all the boys to head for the ring ropes at once, leaving him alone with a stunned Calhoun, who had only just met the Mormon Giant. “Calhoun turns around and Leo is facing him and he crotched him. When he crotched him, Calhoun tried to sit down,” explained Dutch Savage, a tag partner in ’77. “Leo picked him up with his right arm, picked him up in the bodyslam position and bodyslammed him. When he did, he crapped himself. The big fat guy, his stomach went, wobble, wobble, like a rubber ball. You know those overalls he used to wear, the cutoff overalls? Crap went all over the audience, people were screaming, yelling, laughing.” Back in the dressing room, Calhoun is mumbling to himself about revenge, and Jonathan, chew in his mouth, calmly said, “Well, there ‘Stacks, if you ain’t careful, I’m going to do it here on the concrete.” (Naturally, Jonathan and Calhoun would be championship partners later, in 1966, in B.C.) 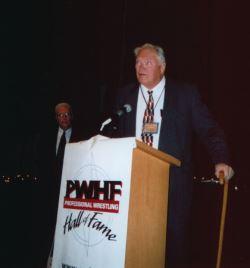 Don Leo Jonathan is inducted into the Pro Wrestling Hall of Fame in 2006. Photo by Greg Oliver

Ever the free spirit, Jonathan would plan his bookings around hunting season, or great places to fish or dive. He’d bring friends along, whether it was taking Red Bastien diving for octopus, ribbing Dutch Savage with wacky dishes on his first trip to Japan, or killing a deer with his bare hands while hunting with Killer Karl Kox, who was hesitant to get blood in his car.

At his induction into the Pro Wrestling Hall of Fame in Amsterdam, NY, in 2006, Jonathan put everyone over but himself. “To learn, I was hoisted on the shoulders of many, many, many great men,” he said, thanking everyone from his wife, Rose, to his three children, to his half-brother, who was in attendance, that he had only met four times in his life. Lastly, he thanked the fans.

“A lot of times people don’t take the time to look back and consider, ‘Why did I get here? How did I get here?’ There were a lot more people that deserved credit for me. I didn’t do this by myself. And anybody who tells you they did it my way, they done it themselves, it’s not reality,” Jonathan said afterward. “The thing is the fans don’t get enough credit, because without them, we wouldn’t have had a business.”