There was one clear match that stood out among the rest on Wednesday’s Mae Young Classic, and it was one that wrestling fans could only dream about. The boss, Meiko Satomura took on the seasoned veteran, Mercedes Martinez.

It seemed as though that these two ladies each had their own plan of how they were going to defeat their opponent. One thing that was evident, however, was that they both went into the squared circle wanting to leave everything between the ropes and gave all they had to advance to the quarter finals.

This meet was filled with neck breakers, arm bars, hard-hitting slaps and frog splashes. I was pleased that Martinez had exceeded my expectations in this episode, as I wasn’t too impressed by her last performance. Could it be that she just needed to go up against someone of her own calibre? I’m starting to think that was the case. 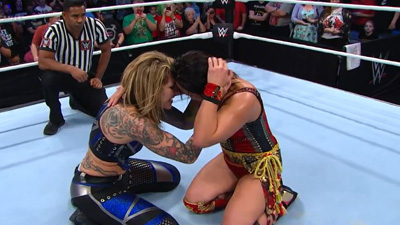 It is a moment of mutual respect for Satomura and Martinez. Photo: WWE.

The expression on Satomura’s face each time she got hit with a backhand to the face or brought down to the mat was unlike any look I had ever seen before. The Japanese legend had a crazed yet determine glare in her eyes that made me believe that she was going to win this event. Both women made it an exciting main event, and they even got the crowd up on their feet and giving them the “this is awesome” chants. Watching two grapplers that have been through the different stages of the evolution of women’s wrestling put on a good show, is there anything better? This makes all of us that much more intrigued about the finals at WWE Evolution later this month.

I would go so far as to say that this episode of the Mae Young Classic has been the best one yet. All of those women deserved a standing ovation last night for their performances. Now, the pressure is on, leaving these ladies to prove that they have what it takes to go up against the best of the best in this exhilarating sport that will forever keep us on our toes. 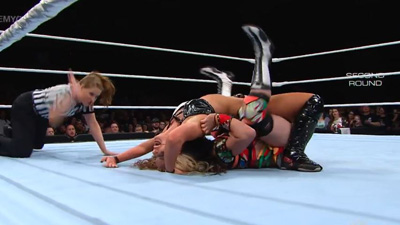 These two competitors know each other all to well and both came prepared for a fight. The young Australian attempted to bring the storm to her opponent but she met her match with Hiroyo Matsumoto. The strength and the power that the Lady Godzilla shows is unlike any other and is very enticing to watch. Even when Storm found her momentum Matsumoto countered it. Much to my surprise, Toni Storm was able to pull out a win by pinfall. 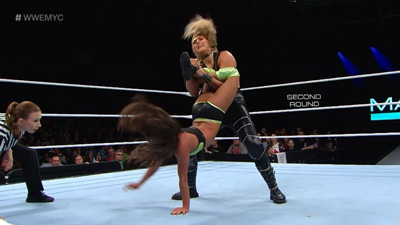 I think it’s safe to say that we were all afraid for Kacy Catanzaro. One of Rhea Ripley’s legs equals Catanzaro’s whole body. To the former gymnast’s credit, she took all of the Australian powerhouse’s kicks and slams like a true champion. She even twirled Ripley like a baton, regaining her energy mid way through the bout. Unfortunately, Catanzaro got a little too cute with her moves which allowed Ripley to bring her down to the mat and win by pinfall.

An electrifying and fierce contest was expected from these two wrestlers, and they delivered. Lacey Lane’s Lucha strong style was too aggressive for Conti to handle. The match was relatively short, but Lane managed to move on to the quarters with a win by pinfall.

It’s always a treat to watch a technician like Meiko Satomura go head-to-head with a skilled vet like Mercedes Martinez. The yokozuna didn’t even flinch when she got slaps to the face and hits to the chest. Martinez attempted to wear her opponent down, but that just enraged Satomura. Each grappler had their moments of glory which made the match a privilege to watch. In the end, however, it was Satomura that ran away with the win and moves on to the next round.